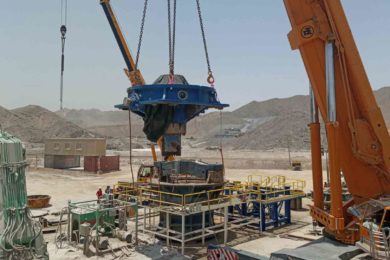 Centamin’s Sukari Gold Mine (SGM) in Egypt is focused on optimising gold production through maximum operating efficiency. When the mine identified inefficiencies within the mill, including the primary gyratory crusher, it called on FLSmidth’s gyratory crusher specialists and a solution was developed that would not only fix the problem, but also increase availability in the long-term.

SGM were experiencing challenges affecting crusher performance and reducing productivity. Two of the four foundation bolts holding down the 1400 x 2100 TS Gyro were broken and the SGM site was also experiencing premature failures to the countershaft. In addition, a crack had developed in the main hub of the bottom shell. This raised concerns about the future reliability of the existing bottom shell, and Centamin wanted to replace it rather than repair.

As the OEM for the crusher, FLSmidth was the natural choice to support the maintenance work and design upgrades. Its crusher specialists worked closely with the SGM team to develop solutions to resolve the challenges and mitigate against future occurrence. And, in order to minimise disruption and downtime, it also provided a detailed schedule of works, including complete planning, labour requirements, tooling, parts and equipment lists.

FLSmidth says: “All this pre-project work enabled us to propose an 11-day shutdown from feed off to feed on (inclusive of run down, cleaning and commissioning time) – a tight turnaround that would ensure a swift return to operations. In order to make sure everything went to schedule, we provided a Lead Product Service Specialist with a team of two FLSmidth field service engineers. Centamin arranged local labour, tooling and parts as per the planning documents. This all enabled the project to be completed ahead of schedule and to everyone’s satisfaction.”

SGM’s site maintenance leadership team were determined to achieve a smooth shutdown. “Their commendable attention to detail and willingness to seek advice from the OEM ensured all planning preparations were completed to the highest standards. In particular, the collaboration between our FLSmidth crusher specialist and the SGM site maintenance department – wherein we physically went through all the steps and critical areas of the job and provided on-the-job training – ensured everyone was well-prepared. This not only enabled the project to complete ahead of schedule, but also helped ensure there were no safety issues during the shutdown.”

The project plans included a number of notable purpose-built solutions designed to make this project run more smoothly and more safely with improved performance. This included Custom Lift lugs – a smart solution to lift the gyro shells in modular form, which reduces the amount of disassembly needed. We were able to remove the entire crusher in less than a day, enabling critical repair work to start on the broken foundation bolts.

FLSmidth recommended that SGM build custom maintenance stands for easy access to the modular crusher components once they had been removed. “The plans were well executed, resulting in a much swifter turnaround and a very safe working environment.” Special brackets recommended by FLSmidth were made to safely assemble hydroset to the bottom shell on a custom frame outside the crusher building. Special jacking bolts, jacking stands and jacking splitting wedges enabled the safe and efficient separating of shells to avoid delay during the outage. FLSmidth also provided detailed plans for alignment rods to ensure safe installation of bushings and hydroset assemblies. Custom shim package lists were provided for levelling the bottom shell, aligning the drive motor, levelling the new bottom shell maintenance frame on ROM, setting the new spider for forming new spider pockets and packers/seals for spider shield installation. By planning for multiple job fronts, utilising several cranes to service multiple teams, we were able to make the most of the shutdown period. This contributed to the brief outage period and the swift return to productivity, proving the detailed planning was worth the investment.

The crusher’s existing spider wear protection shields were not protecting all areas of the spider, leading to premature wear. To counter this, we proposed an upgrade to our new “wrap around” spider shield wear package, which protects the whole spider. SGM were keen to take advantage of this solution and became one of the first sites to benefit from this new design. The new spider wear package will eliminate wear to the spider and save money on expensive replacement parts. The new ‘wrap around’ spider wear package was installed without any issues and is performing as planned.

“We are so appreciative of FLSmidth’s support throughout this project. The collaborative approach resulted in excellent execution from both teams and all works were carried out in a safe manner and completed 38 hours ahead of planned time,” said Amr Houssana, Sukari General Manager at Centamin. “The SGM crushing crew as a whole has gained a wealth of experience and on-the-job training on the crusher during this time. The whole job ran like clockwork, which is a credit to FLSmidth, the SGM crushing supervisors and the maintenance department.”