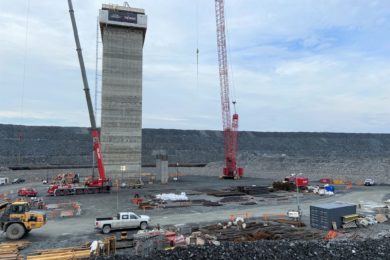 A fleet of MacLean battery-electric vehicles (BEVs) are set to operate at the Odyssey Mine, one of Canada’s largest underground gold mining projects, after the OEM and Canadian Malartic Partnership agreed on a fleet order.

The mine, currently under construction, is owned 50:50 by Yamana Gold Inc and Agnico Eagle Ltd. The partners have already said it is expected to be one of the most modernised electric underground mines, with all major mobile production equipment (such as trucks, scoop trams, jumbos, bolters, and longhole drill rigs electric powered).

The MacLean BEV fleet at Odyssey Mine will be used for ground support installation, explosives charging, materials transport, and construction and maintenance, the OEM said.

The Odyssey Mine, located near the Town of Malartic in the Abitibi-Témiscamingue region of northern Quebec, will extract ore from an orebody that lies underneath the historical East Malartic Gold Mines, whose Mine Manager from the late 1930s to late 1940s was none other than ‘Ducky’ MacLean, father of Don MacLean, who founded his namesake mobile equipment company in 1973 and spent close to a decade of his childhood in the Malartic mine camp.

Don MacLean’s son Kevin MacLean now leads the mining vehicle manufacturer, having assumed the role of company President in 2009. He said: “Every fleet order is special but this one has particular resonance because it connects the MacLean family past with the MacLean company future in the form of battery-powered mining vehicles. The underground project of the partnership provides a perfect opportunity for MacLean mobile equipment to return to East Malartic in support of diesel-free operations.”

Don MacLean added: “I’m thrilled to see underground mining coming back to Malartic and grateful that the partnership has put their faith in MacLean BEVs to get the job done safely and productively.”

Tony Caron, MacLean VP of Quebec, Nunavut, and Latin America, said: “The fact that the MacLean fleet in Malartic will represent a return to Don’s childhood roots adds a special dynamic to this story, one that everyone at the MacLean branch in Val-d’Or will keep at heart as we dedicate ourselves to supporting the success of Odyssey Mine.”

The partners approved construction to transform the Odyssey Project into the Odyssey Mine over the coming years in February, spelling out plans to extract 19,000 t of ore at an estimated grade of about 2.75 g/t Au and roughly 5,000 t/d of waste rock during peak operation. It will be accessed by a ramp and a shaft estimated to be 1,800 m deep.