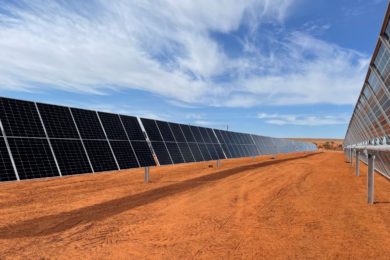 Pacific Energy says its subsidiary, KPS Power Generation, has completed the conversion of Iluka Resources’ 10 MW diesel power station at the Jacinth-Ambrosia mineral sands mine in South Australia to a hybrid power facility.

The reduction in diesel consumption and improvement in fuel efficiency is expected to save over 2 million litres of diesel and over 5,500 t/y of CO2 at the operation, according to Pacific Energy.

KPS has operated the 10 MW diesel power station at the Jacinth-Ambrosia site since 2009. Under the new contract, which runs for an initial term of seven years, KPS will:

juwi Renewable Energy Pty Ltd, the Brisbane-based subsidiary of juwi AG, constructed the medium penetration solar/diesel hybrid power solution for Jacinth-Ambrosia, with KPS owning and operating the hybrid project. It is expected to deliver almost 21% of the mine site’s annual electricity needs.

Shane Tilka, General Manager, Australian Operations at Iluka, said: “The move from diesel to hybrid energy at Jacinth-Ambrosia marks an important evolution in Iluka’s Australian operations. It also offers a potential blueprint for the future use of renewable energy at the company’s other existing and planned operations.”

Pacific Energy Group CEO, Jamie Cullen, said: “We are thrilled to work alongside Iluka, a valued long-term client to deliver a world-class, world-first solar PV and ETC hybrid power facility, and to assist them with reducing carbon emissions and transitioning to net-zero emissions.”