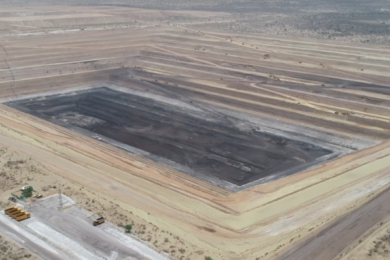 On December 17, 2021, Sindh Engro Coal Mining Company (SECMC) announced that it had successfully achieved the 10 Mt of coal production milestone. SECMC, one of the largest public-private partnerships in the energy sector in Pakistan, commenced commercial operations in July 2019 with an annual production capacity of 3.8 Mt. Over the past 2.5 years, SECMC has begun to transform the energy landscape of Pakistan by facilitating production of electricity using indigenous coal reserves. The coal feeds a 660MW coal fired power plant and the overall project is classed as a is classed as a China-Pakistan Economic Corridor (CPEC) priority implementation project.

SECMC is one of two main lignite coal mining operators in the country, and is located in in Block II of the Tharparkar (Thar) area in Sindh province of Pakistan. It is a joint venture between the Government of Sindh (GoS), Engro Energy Ltd (formerly Engro Powergen Limited) and its partners namely Thal Ltd (House of Habib), Habib Bank Ltd (HBL), Hub Power Company (HUBCO); and China Machinery Engineering Corporation (CMEC). The world class Huolinhe Open Pit Coal Mine in Inner Mongolia, China, a subsidiary of China’s State Power Investment Corporation, has also joined the SECMC board as strategic investor with preference shares’ subscription.

The other main mine in the country which is just going into production is operated by Sino Sindh Resources Ltd (SSRL) which is located in Block I of the same Thar region; it is also a CPEC project and is owned by Chinese group Shanghai Electric Power Company Ltd. It comprises a 7.8 Mt/y open-pit coal mine and installation of a 1,320MW coal-fired power plant (2 x 660MW). Mining work was set to be completed by end 2021 and the first unit of the power plant is due to start working from 2022 while the entire project is scheduled to be completed by 2023. SSRL has a large mining fleet comprised of 55 t MT86D Chinese wide body trucks from LGMG to be loaded by 28 Liebherr R 9100B hydraulic mining excavators, the largest single mine fleet of this model in the world.

The SECMC mine uses a large fleet of 130 Chinese 60 t TONLY TL875 wide body trucks for coal haulage which are loaded by 18 hydraulic excavators, mainly Komatsu PC1250 units. The record production has resulted in the generation of over 10,000 GwHs of electricity, contributing to the national grid. Besides, the company’s record production of coal and generation of electricity using Thar’s local reserves has benefitted the national economy by saving $210 million through import substitution during the same period. 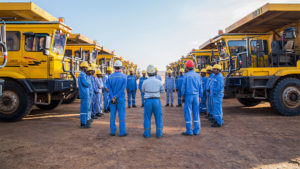 During the course of operations, SECMC has maintained a good safety record following international and world-class benchmarks – a feat that has earned international acknowledgements from organisations such as the British Safety Council. SECMC has also adopted the United Nation’s Sustainable Development Goals (SDG) framework to deploy high-impact interventions prioritising education, health, economic growth and women empowerment amongst other areas.

SECMC has also contributed to uplifting the local community by generating employment opportunities for the local population and creating other economic avenues for the community. It is pertinent to mention that 80% of the employees in SECMC are locals from Sindh where the project has provided significant socio-economic benefit to the local Thari population.

“The 10 Mt coal production mark is a commendable achievement considering the constant fluctuation and vulnerability in international coal prices,” said Chief Executive Officer SECMC – Amir Iqbal. He added that Thar coal is the best resource to help the national economy in terms of easing out the pressure on the Current Account Deficit and also indigenise the current energy mix which is heavily reliant on imported fuels. Currently, the second phase of the SECMC mine is already under development which will increase SECMC’s production to 7.6 Mt per annum with a cumulative power generation of 1,320MW.

Talking about the subsequent phase III expansion project, Iqbal said that the estimated investment for phase III expansion is to be approximately $100 million which will enable Thar Block-II to achieve a sustainable supply of 12.2 Mt of coal annually over the next 30 years. SECMC is expected to complete this expansion by June 2023 and with this expansion coal price of SECMC mine is to be reduced to under $30/t – making it the cheapest fuel source in the country ensuring economic stability and energy security for the country. In addition, phase III expansion will also enable Pakistan to save $420 million per annum on the account of import substitution whilst also leading to a reduction of PKR74 billion in circular debt on an annual basis.