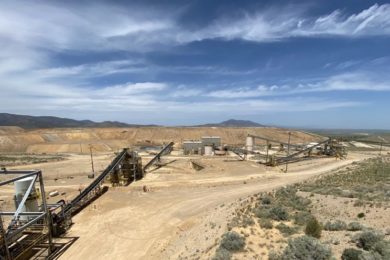 i-80 Gold Corp has announced its development plans for 2022 – a catalyst-rich year as the company commences its plans to build a comprehensive Nevada mining complex. i-80 is in the process of developing multiple mining operations to achieve its objective of building a Nevada focused mining company with a goal of ultimately producing more than 500,000 oz of gold annually. i-80 completed multiple strategic transactions in 2021, the first year of it being a publicly traded company, that position the Company to achieve its goal of becoming a prominent, stand alone, gold producer in the state of Nevada. i-80 acquired the Granite Creek, Lone Tree and Ruby Hill properties to become one of the largest holders of gold and silver resources in the state.

Importantly, the company also secured the ability to process all types of gold mineralisation, including refractory gold bearing mineralisation, through the acquisition of the Lone Tree processing complex and also through interim processing agreements with Nevada Gold Mines (NGM) that provide it with the flexibility to process material from any of the three planned underground operations until the Lone Tree autoclave is restarted. Processing of refractory mineralisation remains one of the biggest barriers to entry in Nevada and i-80 is currently one of only three companies with this capability.

To execute its “Hub and Spoke” development plan, i-80 intends to construct four new mining operations over the next three years, complete multiple large-scale drill programs, advance permitting, build a tier-one exploration, development and mining operations team, and restart the Lone Tree autoclave. Lone Tree will be the “Hub” of i-80’s Nevada operations as the central processing facility, operations office, assay lab and warehouse for all sites. Mineralisation from Granite Creek, Ruby Hill, and McCoy-Cove will feed the Lone Tree Autoclave, once restarted, and mineralisation from the Buffalo Mountain (and Brooks) open pit will be processed at the Lone Tree heap leach facility.

“With a strong balance sheet, we are concentrated on achieving our goal of becoming one of Nevada’s largest gold producers”, stated Ewan Downie, Chief Executive Officer of i-80 Gold. “2021 was a highly successful first year for i-80 where we closed multiple strategic acquisitions that position i-80 as one of the largest holders of gold and silver resources in the State.”

“Executing our aggressive growth platform is the key focus for 2022 and management is in the process of building a tier-one management team with a track record of operational excellence in Nevada“, stated Matt Gili, President & Chief Operating Officer of i-80 Gold. “We are targeting peer-best production growth through the development of our portfolio of permitted, road accessible deposits. Additionally, the company has gained a strategic advantage as one of only three companies in the State with infrastructure to process refractory mineral resources, once the facility has been retrofitted to suit the company’s deposits.”

Lone Tree is expected to become the hub of i-80’s Nevada operations, and the central processing facility for mineralisation from the first four planned mining projects. Importantly, Lone Tree is host to infrastructure that, following successful refurbishment efforts, will allow it to process refractory and oxide mineralisation. Currently on care and maintenance, the property hosts existing infrastructure that includes a whole ore autoclave with capacity of 1 Mt/y, a flotation circuit with capacity of 1.8 Mt/y, a CIC circuit & leach pad with 6.5 Mt/y of remaining capacity, a tailings dam with 1.5 Mt of remaining constructed capacity and an additional 10 Mt of designed capacity, a waste dump, along with several buildings useful for the development of all i-80’s projects including a warehouse, maintenance shop, administration building and assay lab. In Q1-2022, the company plans to award the contract to complete a detailed engineering study for the restart of the autoclave and secure key personnel to execute the restart plan. i-80 considers the Lone Tree infrastructure to be the most strategically located processing facility in Nevada, located on Interstate 80 with the Nevada Railway less than two kilometres to the north, and will be the platform from which i-80 intends to grow its business.

The fully permitted Granite Creek underground represents the  company’s most advanced project. Initial rehabilitation of the underground workings was completed in 2021 and additional levels are now being constructed and multiple levels are being prepared for mining. A surface and underground drill program, expected to comprise more than 20,000 m of drilling, is well underway with positive results. Following the 2022 drill campaign, the  ompany intends to complete a revised resource estimate focused on the underground mineralised zones. The Granite Creek Mine Project hosts both open pit and underground resources and is strategically located proximal to Nevada Gold Mines’ Twin Creeks and Turquoise Ridge mines at the north end of the Battle Mountain-Eureka Trend at its intersection with the Getchell gold belt in Nevada. The underground deposit at Granite Creek represents one of the highest-grade gold deposits in North America with resource grades in excess of 10 g/t.

The primary goal of the 2021/2022 drill program is to advance underground drilling and test mining with a target of ramping up to production in H1-2022. Underground drilling will be focused on delineating sufficient resources for near-term mine development and full production, and a Cubex drill was recently added to define initial stoping areas. Initially, material mined from Granite Creek will be trucked for processing at the nearby NGM’s Twin Creeks processing facility through the interim processing arrangement that was entered into for processing until the company’s Lone Tree facility is operational.

In addition to the underground program at Granite Creek, the surface drilling program testing near-surface mineralisation for metallurgical purposes and open pit definition was completed in 2021. This part of the program was competed primarily to advance permitting for open pit mining including heap leach processing on-site. A Preliminary Economic Assessment for the Granite Creek Mine Project was completed in 2021 and a full feasibility study for the open pit project is planned to be completed in the future.

Ruby Hill includes an open pit mine and related infrastructure (mill/heap leach) and is located immediately west of the town of Eureka proximal to Highway 50. The Ruby Hill Property is host to multiple gold, silver and base metal deposits that collectively comprise one of Nevada’s largest mineral endowments that offer substantial upside. In Q4-2021, i-80 launched a multi-drill campaign that will see a minimum of 20,000 m drilled in 2022 followed by a resource update. All deposits remain open along strike and at depth. Multiple gold and polymetallic exploration targets exist on the property and i-80 will begin permitting for the construction of a decline to access the high-grade Ruby Deeps deposit and the Blackjack Zone with the intent of trucking refractory mineralisation for processing at Lone Tree. In H1-2022, i-80 will continue with processing of material mined in H2-2021 at the heap leach facility on the property. Ruby Hill also includes crushing and CIL processing infrastructure.

In November 2021, i-80 announced that it intended to proceed with its planned underground, advanced–exploration, program at the company’s 100%-owned McCoy-Cove Property. The underground plan will include the construction of a decline, and a level that will include multiple drill bays in order to upgrade resources and complete a Feasibility Study. The Cove deposit on the property represents one of North America’s highest grade gold deposits with grades in excess of 10 g/t. The deposit remains open for expansion down-dip. In the coming weeks, the company will engage contractors to proceed with the initial underground development plan and drilling of approximately 40,000 metres that is expected to commence in the second half of 2022 followed by a Feasibility Study. The McCoy-Cove Property is strategically located approximately 50 km south of the Company’s Lone Tree Complex, and immediately south of Nevada Gold Mines’ Phoenix Mine within the Battle Mountain-Eureka Trend. The Property is accessed via all-season road from Highway 55 in Nevada.