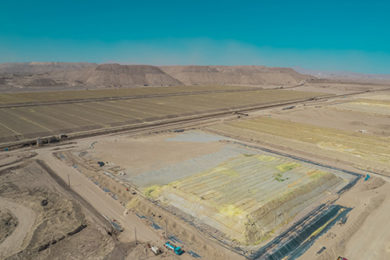 Global copper miner Antofagasta PLC has long been seeking a way to leach copper from primary sulphides and in a recent article says it appears to have found the answer. “Why not use bacteria like everyone else?” was a question the company was asked when, almost 20 years ago, the Michilla copper mine, then owned by Antofagasta, started to use chloride salts to leach its secondary sulphides. It says the explanation was simple. Michilla’s pioneering use of seawater, in its desert environment, for its processes had a drawback: it precluded bacterial leaching because seawater’s high concentration of chlorine would have killed the bacteria.

The answer to that problem, developed by an in-house team led by Abraham Backit, was a process that became known as Cuprochlor®. What it essentially does, explains Backit, is to bind together, or agglomerate, the particles of mineral –particularly fine in the case of Michilla– into a porous but manageable material that can then be heap leached. The agglomeration is achieved by mixing the mineral and leach solution with chloride salts and sulphuric acid, which react to form a plaster-like paste. “It was a completely new idea,” recalls Backit, “and we hit on it because we were looking for a solution for a mine that produced a lot of fine material.”

Over the years, the process was gradually refined and went on to deliver recovery rates of around 90%. Then, a new question soon arose: if chloride leaching works for secondary sulphides, could it also work for primary sulphides? That was a question with much broader implications. Primary sulphides abound and, despite efforts across the industry over many years, a way to leach them economically remained elusive.

In response, the Antofagasta team began a series of tests, adjusting the different variables – such as temperature, reagents concentrations and particle size – involved in a chloride leaching process using knowledge gained from developing Cuprochlor® to see if it could be effectively adapted for primary sulphides. Temperature proved to be one of the keys. Tests – first in the laboratory and then on a semi-industrial scale – showed that, by raising the temperature of the heap to around 30°C, Cuprochlor-T® successfully recovers copper from primary sulphides such as chalcopyrite.

The technology is currently being tested at an industrial scale in a 40,000 t heap of primary sulphides at Centinela, effectively replicating previous smaller scale test results. “The innovation is not the reagents; it’s the process itself,” says Backit. “It’s like a jigsaw and, if one piece is missing or doesn’t fit, it doesn’t work; the innovation is making them all fit.”

The results have been “very exciting,” says Alan Muchnik, Vice President of Strategy and Innovation at Antofagasta Minerals. So far, the Cuprochlor-T® has proved to deliver recovery rates of over 70% after approximately 200 days of leaching. “We are a very well positioned player to unlock copper from our primary sulphide resources.”

Primary sulphides account for the greater part of the world’s copper resources and, at present, have to be treated in concentrator plants. This is costly in terms of both capital and operating costs, meaning that they are sometimes referred to as “trapped” resources as the copper in the resources cannot be released economically. “The potential to incorporate this technology into our development plans is promising” says Muchnik. Primary sulphides occur at greater depths in copper deposits and, despite their abundance, some are not exploited because the lower grades do not justify the cost. With this leaching process that could change, points out Muchnik, especially at sulphide mines that already have existing electrowinning infrastructure at their operations.

Work continues to optimise the Cuprochlor-T® process and, crucially, its cost, says Abraham Backit. One focus of attention is the energy used to heat the heap. A further step, adds Muchnik, is to see how Cuprochlor-T® can be complemented by other technologies to also recover by-products as well as copper. That would boost its application to mines where by-products account for a significant part of revenues.

“The technology is fully patented and is becoming available to our operations to incorporate in their long-term planning. Its implementation will be subject of further project studies,” says Muchnik. This opens “opportunities across our operations, particularly where we currently have or will have primary sulphide ores available for mining, and spare capacity in existing cathode production facilities. We expect new copper from Cuprochlor-T® within this decade.”