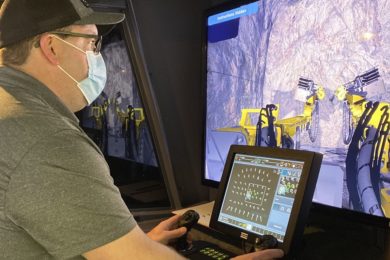 The Odyssey Mine near the town of Malartic in the Abitibi-Témiscamingue region of northern Quebec has entered into a collaboration agreement with the Centre de formation professionnelle Val-d’Or and Epiroc under which the mine’s operators will be trained using simulators that will immerse them in a virtual and controlled mining environment. The mine is owned and operated by Canadian Malartic Partnership, a 50:50 JV between Yamana Gold Inc and Agnico Eagle Ltd.

The state-of-the-art future Odyssey gold mine will feature an LTE mobile communication network, an automated fleet of 60 t trucks operated from the surface, on-demand ventilation, and with all of the major production fleet including trucks, drills and LHDs also being battery electric. The Odyssey Mine will be accessed by a ramp and a shaft estimated to be 1,800 m deep. Plans are to extract 19,000 t of ore at an estimated grade of about 2.75 g/t gold and roughly 5,000 t of waste rock per day during peak operations.

Set up at the CFP Val-d’Or, students enrolled in the Ore Extraction Training will also have the opportunity to use the simulators as part of their training. This agreement Odyssey not only to be at the heart of the technological evolution of the mining industry, but also to contribute to the training of its next generation. The Epiroc simulators are programmed to operate identically to mining equipment used in the industry, such as drill rigs and scoop loaders (LHDs).

They also offer their users the same sensations as if they were operating underground. The simulation platform features several training scenarios to develop skills safely and efficiently. The first simulator was made available to apprentices on February 2, 2022. Two other simulators will be added in the coming months. The Odyssey Mine will use this technology to train contractor employees and eventually its own employees. The details of the mine’s future BEV production fleet, including Epiroc machines, have not yet been released, but a MacLean BEV fleet is to be used for ground support installation, explosives charging, materials transport, and construction and maintenance.

Production via the ramp is expected to begin at Odyssey South in late 2023, increasing to up to 3,500 tpd in 2024. Collaring of the shaft and installation of the headframe is expected to commence in the second quarter of 2021, with shaft sinking activities expected to begin in late 2022. The shaft will have an estimated depth of 1,800 metres and the first loading station should be commissioned in 2027 with modest production from East Gouldie. The East Malartic shallow area and Odyssey North zones are scheduled to enter production in 2029 and 2030, respectively.