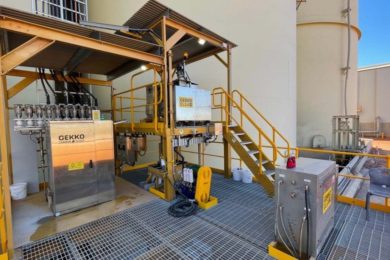 The team at Gekko Systems has announced the release of its next-gen Mark 6 Carbon Scout solution.

The self-contained device collects slurry samples from CIL/CIP tanks to determine the concentration of the activated carbon in the pulp for each tank, to an accuracy of ±0.5 grams of carbon per litre of pulp, Gekko claims. The concentration levels are then used to automate carbon movement to optimise the carbon distribution.

Gekko said: “The Carbon Scout benefits sites by providing real-time data which allows operators to significantly reduce soluble gold loss from the circuit by providing advanced measurements ahead of any unwanted excursions. The Carbon Scout also allows for automation of the carbon movement, minimising exposure to hydrogen cyanide gas and reducing the need for manual handling of samples.”

Constructed from stainless steel, the ground-level system enhances operator efficiency by removing the need to undertake time consuming manual sampling and provides a single point sampling station to improve accuracy and increase safety, according to the company. The automation of carbon movement, meanwhile, increases the efficiency of the process, ensures carbon inventory set points are achieved and reduces the need for operator, metallurgist and other processing staff input.

Some of the sites to have installed the Carbon Scout solution include Gruyere in Western Australia (pictured above on the left with the Gekko OLGA on the right) and Ity in Cote d’Ivoire.

The solution was commercially released in 2017.