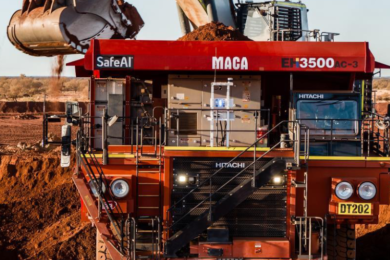 Autonomous haulage technology company SafeAI has taken a big step forward in mining after Australian contract mining major MACA Mining announced in its results for the six months ending December 31, 2021 that it has completed a six month proof of concept trial at client Capricorn Metals’ Karlawinda gold operation, which is located 65 km south-east of Newman in the Pilbara region of Western Australia. The trial involved retrofit of a next generation SafeAI autonomous operating system to a 181 t class Hitachi EH3500AC-3 haul truck and completion of an operational trial including a series of load-haul-dump cycles with a manned loader. MACA provides open cut mining services at the Karlawinda gold project including drill and blast; load and haul; provision and maintenance of all plant and equipment.

The project now has approval to advance to the next stage with multiple autonomous haul trucks set to operate at Karlawinda. MACA said: “Important safety and efficiency gains can reduce operating costs and facilitate a reduction in fleet size to achieve the same total material movements.” It added that it brings the opportunity to upskill its workforce to support autonomy rollout and operation and a contractor market opportunity across its entire client base from large iron ore miners through to smaller gold, base metal and battery metal producers. MACA Managing Director and CEO Mike Sutton said on the results conference call: “Autonomy technology has only previously been available to the large iron ore miners in Australia. We will be taking strides to bring this technology to the next tier of base metals, precious metals and battery metals producers. We are setting MACA up for the next 20 years in our 20th year.”

The presentation also highlighted some of the benefits of SafeAI’s AHS offering – processing power onboard for decision making with less reliance on server communication and human interaction; agnostic to haul truck manufacturer and FMS plus an intuitive task based assignment system. It includes V2X technology which is enbedded for personnel and vehicle safety, delivering nextgen collsion avoidance capability; plus it has an advanced perception system from camera, LiDAR and radar analysed on board to detect/avoid obstacles and dynamically map the environment. Finally it mentioned other benefits including 75% less upfront capital per vehicle, lower operating costs and subscription, it accounting for a fraction of network infrastructure spend, plus it brings a pathway to autonomy of other vehicles, while machine learning further enhances safety benefits.

Capricorn Metals in its December 2021 quarterly activities summary said construction of Karlawinda was completed in the June 2021 quarter with the successful commissioning of the processing plant culminating in first gold poured at the end of June 2021. The project was completed in line with time and cost guidance. During the September 2021 quarter commissioning and optimisation activities were completed, including the ramp up in processing plant availability and throughput to guidance rates on a steady state basis by the end of the quarter. These throughput capacities are expected to produce a long-term gold production range of 110,000 to 125,000 oz per annum.

Mining continued in the Bibra open pit with total movement of 2.5 Mbcm during the quarter. Approximately 1.5 Mbcm of waste material was mined and utilised primarily for the construction of the second lift of the Tailings Storage Facility. Ore mining transitioned from primarily laterite to a blend of oxide and laterite zones as additional oxide ore has become accessible in the Bibra pit. The mining reconciliation to date is in line with the Reserve for tonnes and grade. A total of 1.98 Mt of ore was mined during the quarter, with ore stocks increasing significantly by 848,000 t to 1.7 Mt at an estimated grade of 0.62g/t for 38,000 oz. The strip ratio for the quarter was 1.8 (w:o), below the life of mine average of 3.6, as mining focussed on accessing oxide ore in stage 1 and 2 of the Bibra pit. The third excavator and truck fleet was mobilised to site at the end of the December 2021 quarter with mining activities scheduled to increase in the March 2022 quarter. 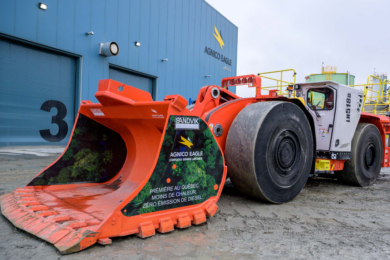 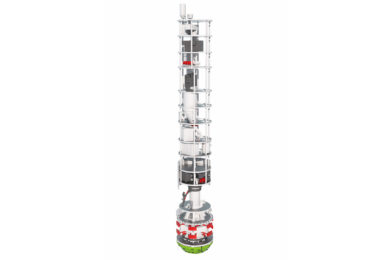