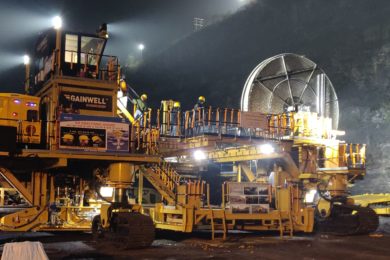 Nick Williams, Founder and Managing Director of Vitrinite has signed the first contract to supply a highwall miner to support the Vulcan Mine in Queensland’s Bowen Basin this week with India’s Gainwell Engineering Global Pte Ltd.

Vitrinite says it is honoured to be the first buyer of Gainwell’s GHWM300M outside India and believes that the introduction of highwall mining technology will play a significant role in the future of the Australian mining industry, as it has in many other coal markets around the world. 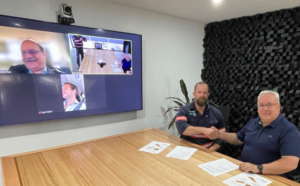 These units are manufactured under license from Caterpillar, with technology developed and refined in the US mining industry over many decades. It says: “Highwall miners have proven to be safe, highly productive, have a low environmental impact, and provide access coal that would otherwise be stranded due to economic constraints.”

This purchase is the result of a two-year research program undertaken by Vitrinite to determine the best method to maximise the value of its extensive resources at Vulcan. “This purchase is the culmination of extensive reviews of operating highwall miners around the world. Gainwell’s product is outstanding and has been determined to be the best suited for the mining conditions at Vulcan.”

Vitrinite anticipates first coal to be mined with the highwall unit in 2023. If this first unit proves as successful as anticipated, Vitrinite says it will likely deploy multiple units in quick succession to increase production.

It concludes: “Vitrinite would like to thank Gainwell for their commitment to providing a world-class product which we believe has a very bright future in underpinning the next generation of highly productive coal mines in Australia.”