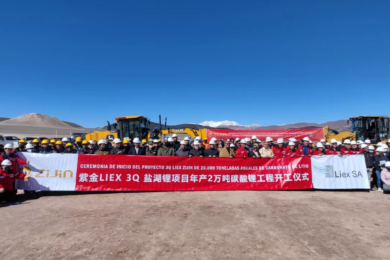 On March 20, a ceremony was held at the heartland of the Catamarca Andes, at 4,100 m above sea level, to mark the start of construction of Zijin Mining’s 3Q lithium brine project, a project with an initial annual production of 20,000 t of lithium carbonate. Also in Argentina, Rio Tinto has announced that it has completed the acquisition of the Rincon lithium projectin Argentina for $825 million, following approval from Australia’s Foreign Investment Review Board (FIRB).

At Zijin’s 3Q project, which it acquired through its Neo Lithium buy, Raúl Jalil, Governor of Catamarca Province, attended the ceremony and delivered a speech. He pointed out that Zijin Mining’s investment has brought new development opportunities for the province. The project will boost the development of various local industries, help bring local products to broader markets, and will create ample job opportunities for residents of the province. He hopes that they would gain access to more professional training, and local students could have the opportunity to visit and study in China.

The female leader of Fiambalá expressed her best wishes for the project on behalf of her community and fellow community members. She said that the 3Q project, a project that local people have been waiting for six years, has become a reality, and from now on, they will share the natural wealth of the land of Fiambalá with Zijin Mining.

VP Shen Shaoyang of Zijin Mining expressed his sincere appreciation on behalf of Zijin Mining for the support given by people from all walks of life to the company’s investment and development in Argentina. As Zijin’s first lithium project, the 3Q project bears great significance to the company’s renewable energy business. The project will place high emphasis on safety and environmental protection, fast-track its construction at ‘Zijin Speed,’ and pursue harmony and common development with local communities, so as to deliver long-term benefits to the local economy, society, and people.

Chinese Ambassador to Argentina Zou Xiaoli sent a congratulatory letter for the commencement of the project. He noted that the 3Q project will bolster Argentina’s industrialisation process, boost local employment, and make positive contributions to the cooperation on green development and renewable energy between China and Argentina. Governor Raúl Jalil and VP Shen Shaoyang cut the ribbon together to inaugurate the project. On March 21, the Minister of Productive Development and the National Mining Secretary of Argentina celebrated the commencement of construction again in a meeting with VP Shen Shaoyang and the management of the 3Q project in Buenos Aires.

The project includes 3Q salar salt pans, a Fiambala lithium carbonate plant and related supporting projects. The first phase of the project is planned to produce 20,000 t of battery-grade lithium carbonate with an estimated total investment of $370 million and will be officially put into production by the end of 2023. The feasibility study for phase 2 projects will be carried out simultaneously this year, and construction will be started in 2023 to expand the annual capacity of lithium carbonate to 40-60,000 t. In addition, to reduce carbon emissions, the project intent is to further increase the use and promotion of clean energy.

Regarding the Rincon lithium brine project, a binding agreement to purchase the project from Rincon Mining, a company owned by funds managed by the private equity group Sentient Equity Partners, was announced in December 2021. Rincon is a large undeveloped lithium brine project located in the heart of the lithium triangle in the Salta Province of Argentina, an emerging hub for greenfield projects. The project is a long life, scaleable resource capable of producing battery grade lithium carbonate. It has the potential to have one of the lowest carbon footprints in the industry.

Rio Tinto Chief Executive Jakob Stausholm said: “Rincon strengthens our battery materials business and positions Rio Tinto to meet the double-digit growth in demand for lithium over the next decade, at a time when supply is constrained. We will be working with local communities, the Province of Salta and the Government of Argentina as we develop this project to the highest ESG standards.”

The direct lithium extraction technology proposed for the project has the potential to significantly increase lithium recoveries as compared to solar evaporation ponds. A pilot plant is currently running at the site and further work will focus on continuing to optimise the process and recoveries. “The market fundamentals for battery grade lithium carbonate are strong, with lithium demand forecast to grow 25-35% per annum over the next decade with a significant supply demand deficit expected from the second half of this decade.”