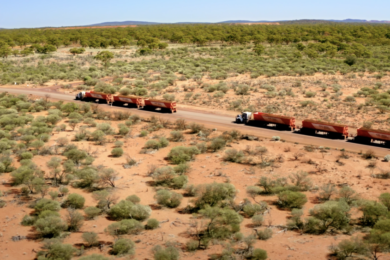 Mineral Resources’ autonomous road trains project has reached a world-first milestone, achieving a successful demonstration run of a triple-trailer, automated road train platoon with each road train hauling 300 t of iron ore. The demonstration showcased the success of its autonomous road trains pilot project, which has been underway at its Yilgarn iron ore operations since late 2021. The company worked with Hexagon’s Autonomy & Positioning and Mining divisions on the solution, which integrates drive by-wire technology with an autonomous management system to orchestrate vehicle movement in road-train haulage.

Mike Grey, Chief Executive – Mining Services, said automating a road train platoon of this size had never been achieved before and he was delighted that Mineral Resources was leading the world with this ground-breaking innovation. “It’s been an exciting journey over the past year and we’ve now achieved a world-first platoon of three autonomous road trains, which is a game changer for us. It’s an extremely proud moment to see our autonomous project grow from desktop concept to iron ore reality so quickly.”

Mineral Resources says it provides innovative and low-cost solutions across the mining infrastructure supply chain. “Our autonomous road trains will form an essential part of the cost-efficient supply chain unlocking stranded resources in the Pilbara region as part of the Ashburton Hub Iron Ore Project.”

Grey said Mineral Resources had introduced a number of new technologies over recent years to enhance the safety and operational efficiency of our long-distance road train haulage fleet and the autonomous road trains would take us to the next level. The technology will initially be adopted for its own mining operations, with a view to offering the solution to its Tier 1 customer base as it grow its Mining Services division.

“As we get ready for the Ashburton Hub Iron Ore Project and look to unlock stranded tonnes of iron ore, our autonomous road trains will be the vital link between the pit and the port,” Grey said. “As the first of its kind in the world, it opens up new opportunities for us, as we can trial the technology ourselves before offering it to our Tier 1 customers.”

Nick Hare, President of Hexagon’s Mining division said Hexagon enjoyed working with MinRes because of its ability to quickly bring ideas into production. “We value the opportunity to demonstrate our position as a leader in sensor, software and autonomous solutions. Mineral Resources is an ideal partner for a project of this size and complexity,” Hare said.