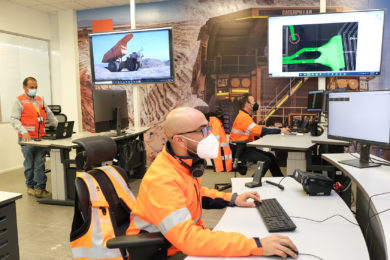 Chilean copper mining group Codelco says that its Ministro Hales copper mine is making steady progress with autonomous haulage implementation that will see four autonomous 363 t 797F trucks in production starting in May 2022. The Command for hauling system has been implemented at the mine through collaboration between Codelco, Caterpillar and Chilean Cat dealer Finning Chile, with the AHS being managed from a new Autonomous Operations Center.

Codelco states that in total, 310 people at Ministro Hales have been trained in direct roles like controllers but also those indirectly involved with the autonomous operations as part of change management to allow successful introduction of the new technology. It also includes both Codelco employees and collaborating companies. The Autonomous Operations Center was finalised and completed and two 797F trucks successfully completed material loading cycle tests.

José Díaz, a shovel operator and one of the first to interact with the autonomous truck, commented: “They installed a screen on my equipment and on it I trace the route of the truck with the trajectory to be loaded. I define the position where it is going to be docked, and with my OK, the truck begins the manoeuvre and we carry out the loading.” For the Mine Manager, Daniel Cavada, “The success of this test also has a lot to do with a new culture, because it is necessary to adapt to a new way of operating. Rigorous procedures are needed, for this training is key. There are also changes in mine planning and how the shift manager operates.”

Multidisciplinary work has been essential for Juan Carlos Villagrán, Technology Business Partner & Director of the Vice Presidency of Technology and Automation (VTAP), who highlights that “we work as an integrated team, understanding the importance and high visibility of this initiative for Codelco, which is leveraging our digital transformation.”

In 2021, Codelco consolidated the operation of new communication highways based on Nokia private LTE network technology in the Radomiro Tomic and Minister Hales divisions. This wireless network connects 100% of the mining fleets inside the open pit mines, with a high quality signal, higher transmission speed. The main advantages are greater coverage, power and bandwidth; high levels of security; a large amount of connected users and low latency, “features that allow the integration of a growing number of data that contribute to a better integration in our operations and reliably implement the technology of the autonomous trucks.”