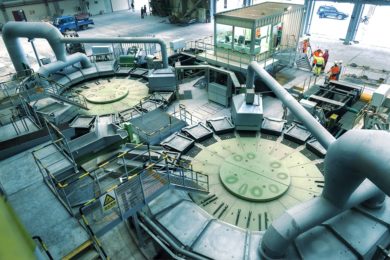 The OEM, which says it has been a frontrunner in the development of anode casting technology for several decades, says the Gresik project is a true milestone for the company.

Today, most of the world’s copper anodes are produced with Metso Outotec’s proprietary anode casting technology, it stated.

Sami Maaniittu, Director, Anode Casting, Metso Outotec, said the system to be delivered to PTS is one of the world’s largest Twin Wheel Anode Casting Shops with a guaranteed capacity of 120 t/h.

“Before that, castings were made manually with controlled ladle tilting,” Maaniittu said. “The first anode weighing and casting machine was delivered to the USA in 1972, and a year later, the first complete anode casting shop was installed at the Harjavalta Smelter in Finland.”

Metso Outotec’s Twin Wheel Casting concept, paving the way for today’s standard, was developed in the 1990s. The equipment design significantly improves casting capacity and provides more efficient use of floor space, according to the company. The wheels are supported on large centre bearings and driven by double drive systems developed to eliminate the backlash effect in the wheel movement and to ensure even quality.

The first Twin Wheel Anode Casting Shop systems were delivered in 1997. Since then, the Twin Wheel has become the first choice of high-capacity anode casting shops, according to Metso Outotec.

Today, most of the anode casting shops supplied by Metso Outotec are fully electric without any hydraulic systems. Their high level of automation ensures premium anode quality with excellent weight accuracy and low reject rate combined with high capacity and availability, the company said. Metso Outotec Anode Casting Shops are safe and easy to operate and feature low energy consumption.

In addition to full anode casting systems, Metso Outotec offers a variety of modular updates for the existing installations, including automation and services.