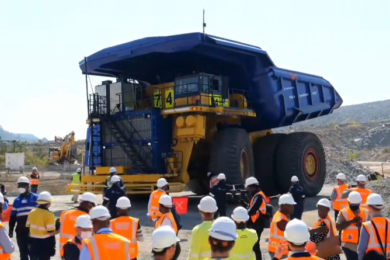 In the presence of South African President, Cyril Ramaphosa, Anglo American has launched its nuGen™ hydrogen-battery hybrid 290 t class mining truck at the Mogalakwena open pit platinum mine in Limpopo Province. It was run with 150 t of payload for the launch, only due to there not being a matching shovel in the trial area, but Anglo said that the prototype is already fully capable of its full 290 t payload. The launch saw it drive up a 7% slope – representative of typical mine haul road grade at Mogalakwena – and then dump the 150 t load, with a main driver and co-driver on board the truck.

Ramaphosa summed up the occasion as follows: “It’s a real joy and pleasure to be here in this place for the launch of the nuGen™ truck…it is a smart step for Anglo American but a giant leap for South Africa’s hydrogen economy as we move into the future. The hydrogen economy is beckoning us as a country and as an industry. It has definitely arrived for South Africa – thank you very much to Anglo American. We are making world history right here in Mogalakwena, in Limpopo and in South Africa.” He also emphasised the importance of the truck in South Africa’s journey to net zero as a signatory of the Paris Agreement. But he added that it also relects an sustainability obligation to the South African people to reduce emissions and work towards achieving carbon neutrality. “It is the genesis of our entire hydrogen economy. They [Anglo American] have delivered on what they committed to do.” He closed by suggesting that Anglo’s next move should be the nuGen™ truck running autonomously, controlled by remote operators. 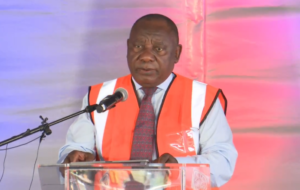 Tony O’Neill, Anglo American Group Technical Director, speaking at the event said the nuGen™ truck program started in 2018, but took a while to get traction due to COVID, however, he added that he remains hopeful that by mid-decade, Anglo American will start the rollout across its wider mining business, and that it will likely by then be on the third generation of the design “and we are already working on the second generation as I speak. We have come a long way, but really we are at the beginning.” He acknowledged Anglo American’s Julian Soles, Head of Technology Development, Mining & Sustainability and Donovan Waller, Group Head of Technology Development for their and their teams’ key role in bringing the project to fruition as well as current Anglo American CEO Duncan Wanblad and just left CEO Mark Cutifani plus the Anglo American Board for their leap of faith and investment commitment to the project.

It was emphasised by Soles, who introduced the truck to the to the South African President and his team at the event, that the hydraulic system was unchanged, but one advantage of electric power, including control of braking, is that the delivered power to the truck systems is much more precise and efficient than diesel power without the engine revving that it requires. While it will take some time for the technology to achieve economic parity with diesel – some of the more obvious savings include vastly less lubricant use without a diesel engine and there being no need for a complex radiator system to prevent overheating, a new radiator design instead managing thermal aspects of the fuel cells. The truck also has a specialised filtration system to limit dust and sulphur levels reaching the fuel cells. New safety features include special crackable glass allowing hydrogen can escape if necessary.

Of course, the nuGen™ truck also allows for the downhill recharge of the batteries to not waste potential regenerative energy that would normally be dissipated as heat on a diesel truck. Only water is emitted from the truck during operation. This one 930E truck unconverted uses 3,000 L/d of diesel – extrapolating this up to the carbon saving from Mogalakwena’s fleet alone, let alone Anglo’s wider mining truck population – the potential is massive.

For the nuGen™ project, Anglo American has worked with some of the world’s leading creative engineering and technology companies, such as ENGIE, First Mode, Ballard and NPROXX, to design, build, and test the 1.2 MWh battery pack, as the haul truck system uses multiple fuel cells that deliver up to 800 kW of power, combining to deliver a total of 2 MW of power; plus design and   implement a software solution to safely manage power and energy between the fuel cells, batteries, and vehicle drivetrain; and develop the power management and battery systems from the ground up, “enabling us to tailor the system to each mine and improve overall efficiency by designing in energy recovery as the haul trucks travel downhill through regenerative braking.”

It has also seen the building of a hydrogen production, storage, and refuelling complex at Mogalakwena that incorporates the largest electrolyser in Africa and a solar plant to support the operation of the haul truck. During the launch, it was pointed out that to maximise truck efficiency, the refuelling station will be positioned within the working pit area, to minimise travel distance for the nuGen™ trucks, with refuelling taking about nine minutes. While use of the nuGen™ truck does not mean a loss of productive performance, diesel trucks currently will be able to operate for longer before refuelling but these are the kinds of issues being worked on for the next generation of the truck. 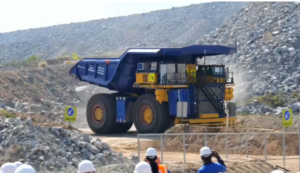 The 2 MW hydrogen-battery hybrid truck actually generates more power than its diesel predecessor, and to give it its full title, is part of Anglo American’s nuGen™ Zero Emission Haulage Solution (ZEHS). nuGen™ provides a fully integrated green hydrogen system, consisting of production, fuelling and haulage system, with green hydrogen to be produced at the minesite. nuGen™ is part of FutureSmart Mining™, Anglo American’s innovation-led approach to sustainable mining – which brings together technology and digitalisation to drive sustainability outcomes, “including our commitment to carbon-neutrality across our operations by 2040.” And the trucks are appropriately being launched at a platinum mine – each utilises 4 oz of platinum in their fuel cells – with each truck using eight Ballard FCveloCity®-HD 100 kW modules.

What about the bigger strategic picture? IM asked Soles just before the launch if this new truck means that Anglo American is effectively becoming its own captive mining truck supplier or should it be seen as more of a transition into working with the main truck suppliers to build units based on this design and what has been learnt? He responded: “It is more of a transition – over the next several years, we envisage converting or replacing our current fleet of diesel-powered trucks with this zero-emission haulage system, which is both cost effective and aligned with our goal of eliminating waste and increasing efficiency, and we will do this in partnership with others, as we have done for the prototype.” He confirmed that the plan is by 2030 to continue the deployment of the nuGen™ ZEHS project at seven of its open pit sites, converting all the diesel-powered ultra-class mine haul trucks at these sites to green hydrogen powered units. These sites are thought to include – in addition to Mogalakwena – Los Bronces, El Soldado, Sishen and Kolomela, with Quellaveco and Minas-Rio also likely candidates.

Of course nuGen™ conversions will have to happen as part of a phased approach with nuGen™ and diesel trucks co-existing at these mines for several years before conversions can be completed. And at some point as trucks would have been due for replacement anyway, conversions will have to make way for new FCEV trucks. There is also the complication of Anglo having numerous different truck types across its sites – looking at Komatsu alone it includes 730E/830E/860E/930E/960E/980E, all different size classes and with their own design nuances. Also Anglo doesn’t just run Komatsu trucks – at Quellaveco for example, it is using Cat 794 AC autonomous trucks that run off Cat’s Command for hauling system. That brings the question of autonomy and phasing in nuGen™ along with AHS – not an easy proposition given the different duty cycles between conventional electric drive trucks and FCEV but one that will have to be faced. Anglo is already automating its 930E trucks at Los Bronces copper mine in Chile using Komatsu’s FrontRunner AHS – though this is also one of the mines on the nuGen™ “list.

Duncan Wanblad, Chief Executive of Anglo American, said: “nuGen™ is a tangible demonstration of our FutureSmart Mining™ programme changing the future of our industry. With diesel emissions from our haul truck fleet accounting for ~10-15% of our total Scope 1 emissions, this is an important step on our pathway to carbon neutral operations by 2040. The mining industry is playing a considerable role in helping the world decarbonise, both through our own emissions footprint and the metals and minerals that we produce that are critical to low carbon energy and transport systems. Over the next several years, we envisage converting or replacing our current fleet of diesel-powered trucks with this zero-emission haulage system, fuelled with green hydrogen. If this pilot is successful, we could remove up to 80% of diesel emissions at our open pit mines by rolling this technology across our global fleet.”

O’Neill added: “We are incredibly proud of what our team, working with expert partners, has achieved in under three years. This is truly a world-class innovation and bears testament to our technical vision and determination to deliver a cleaner and smarter future for mining. It is these game-changing innovations that are exactly why we began our FutureSmart Mining™ journey in 2014, knowing how much of a difference we can make, including in the energy transition and across our societal footprint. Innovative, clean and independent power systems, such as our nuGen™ ZEHS project, offer a significant part of the emissions solution.”

Natascha Viljoen, CEO of Anglo American Platinum, said: “PGMs play an essential catalytic role in many clean-air technologies, including related to hydrogen production and hydrogen-fuelled transportation. As part of our market development work, we have for some years been working towards establishing the right ecosystem to successfully develop, scale up and deploy hydrogen-fuelled solutions. Hydrogen has a significant and wide-ranging role to play in achieving a low carbon future – particularly as an energy carrier enabling the development of a renewables-based power generation system. We are particularly excited about the potential of nuGen™, amongst other opportunities, as we work to champion the development of South Africa’s Hydrogen Valley.”

Sébastien Arbola, Executive Vice President in charge of Thermal Generation, Hydrogen and Energy Supply at ENGIE said: “At ENGIE, we realise the importance of green hydrogen in the decarbonisation of heavy-duty mobility, and we are dedicated to helping industry players accomplish their carbon neutrality goals. We are delighted to partner with Anglo American to provide renewable hydrogen for their proof of concept. Through this partnership, we aim to unlock the potential of green hydrogen in South Africa and pave the way for the decarbonisation of the mining industry.”