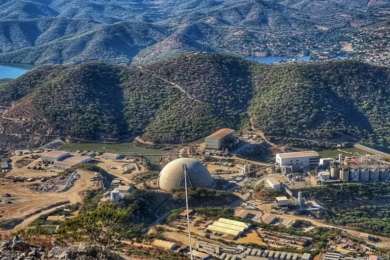 In its just released Q1 2022 report, Torex Gold says with the Technical Report for its Morelos Complex in Mexico released, “our focus has shifted to bringing Media Luna into production on time and on budget.” The Technical Report provides a life of mine plan for the El Limón Guajes Mine Complex (ELG Mine Complex) and Feasibility Study (FS) for the Media Luna Project (ML Project). The ELG Mine Complex and the Media Luna Project are collectively known as the Morelos Complex. The life of mine will be 11.75 years commencing April 1, 2022 and ending Q4 2033 with an annualised gold equivalent (AuEq) sold of 374,000 oz  plus increased exposure to copper and silver with annual payable output of 34.8 Mlb Cu and 1.327 Moz Ag.

During the period in which the capacity of the processing plant is fully utilised (April 2022 through December 2027), annualised AuEq sold is forecast to average 450 koz. Based on current Mineral Reserves, annual sales are forecast to decline post 2027 when the ML Project becomes the sole source of feed for the processing plant. Initiatives to fill the mill beyond 2027 are currently underway.

Torex has been operating the ELG Mine Complex since 2016, which includes three independent open pits to extract ore from the skarn hosted gold-silver Guajes and El Limón deposits along with an underground mine (ELG UG). The open pits and underground mine feed a centrally located cyanide leach/carbon-in- pulp process plant (CIP), with filtered tailings deposited just to the west of the ELG Process Plant. The Media Luna (ML) Project is being developed with six primary mining zones each with designated infrastructure. At steady-state production, the underground mine is expected to deliver an average rate of 7,500 t/d of ore to the upgraded processing plant. The Technical Report assumes a credible ramp-up to steady-state production with first development ore in Q4 2023. Production stoping is expected to commence in Q2 2024 with the mine achieving commercial production in Q1 2025. The ML Project is expected to be operating at 7,500 t/d in Q1 2027, implying a 3-year ramp-up from first production ore or 3.5 years from first development ore.

Primary access to the Media Luna deposit will be through the 7 km long Guajes Tunnel which will be equipped with a conveyor, where development rates are steadily increasing with advance of more than 1.5 km at quarter-end. South Portal Upper is advancing to plan, and rates in South Portal Lower are beginning to improve as crews work through a section of challenging ground conditions. “We have also started procurement for long-lead items including the Guajes Tunnel conveyor, process plant flotation circuits and regrind mills, and mine ventilation fans. Procurement for the combined diesel and battery electric underground mining fleet is set to begin over the coming weeks.” In the Technical Report, Torex says continued engagement with suppliers for all mobile equipment includes further assessment of automation and autonomous operation, and securing battery electric vehicles on time to support LOM schedule. The first mobile fleet equipment deliveries are planned for the second half of 2023.

The development fleet was determined from the total scheduled advance metres required to reach full production and the performance that each jumbo can achieve, considering the development heading size, ground support requirements, and the number of work headings available. Generally, except for initial tunnel development, each jumbo will have multiple workplaces to cycle development rounds. Each jumbo will be matched with an LHD and a mechanical bolter and there will be an additional mechanical bolter in the fleet dedicated to ground rehabilitation or as a spare. The number of development explosive loading units has been determined based on capacity to load two development rounds per shift (or approximately one explosives loader per two development crews). There are also haulage trucks to assist with development, especially during the initial phase before the waste passes and Guajes Tunnel conveyor is available.

The production fleet has been determined from the total scheduled stope tonnes, stope cycle productivities, and performance that each production drill and LHD can achieve. ITH drills will be required for drilling the slot raises for stopes using the Machine Roger V30 reaming head. The ITH drill will have a portable compressor located at the drill site. The ITH will also be used to drill boreholes for paste backfill distribution, water drainage, service water, and electrical (for running cable from level to level). Top-hammer production drills will be used for production drilling and 14 t LHDs will be used for mucking from the stope and dumping into an ore pass. Two emulsion explosive loading units have been included to provide flexibility to load two stopes concurrently. The BEV fleet requirements number 66 units in all and include 11 14 t LHDs, 5 top hammer longhole drill rigs, 2 ITH drills with reamers, 2 stope explosive loaders, 2 telehandlers, 6 scissor lifts, 6 boom trucks, 4 large personnel carriers and 18 small personnel carriers. Single unit requirements include shotcrete sprayer, transmixer, mobile blockholer, cable bolter and grader.

There will be two types of battery charging stations: battery swap and charge stations and small mobile charging stations. The battery swap and charge stations will be located 695L, 795L, 895L, 1095L, and 1195L while the mobile charging stations will be located on levels 695L, 895L, 1095L, and 1195L. The charging philosophy for the battery swap and charge station works as follows: there are four battery slots, up to three will be in charge and one will remain empty for the next battery to be dropped off. When a piece of equipment pulls up alongside the station a 10 t overhead crane will be used to remove the battery from the mobile equipment, place it in the empty charging slot, and then place a fully charged battery on the mobile equipment. There are three charging posts connected to one battery power cabinet and the charging cabinet can provide an output of 320 kW to the charging posts at 20 kW increments. Each charging post can only charge at a maximum of 160 kW, therefore, two charging posts will hold 100 kW while the third will hold 120 kW.

Mobile charging stations will be used for smaller battery electric vehicles. There will be a similar set-up as the battery swap and charge stations, using three charging posts and one cabinet. However, the batteries will remain on the mobile equipment and will be charged in place while parked. The excavation is meant to allow traffic to pull to the side, away from traffic flow. Ventilation is not required as the depth of the station is shallow and can be classified as flow through ventilation. The mobile charging stations will have fire detection and suppression.