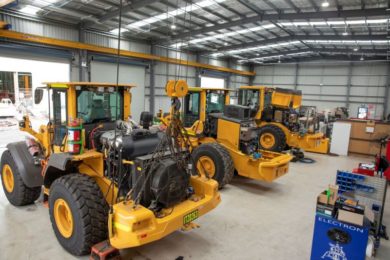 The first machine is being sent to Gold Fields’ St Ives mining operation in Western Australia on a 12-month hire agreement.

The company is also in the middle of another two BIT120 builds for Barminco Holdings Pty Ltd, the Perenti-owned underground contract mining company.

The BIT120 leverages the learnings from the TRITEV project, which was part of an initiative developed under Project EVmine, with the help of METS Ignited.

3ME Technology and Batt Mobile Equipment (BME) unveiled the industry-first machine under this project in 2020, which was sent to Aeris Resources’ Tritton copper mine as part of a collaboration that dates back to 2017.

Based on a second-hand Volvo diesel-powered L120E, the TRITEV required a “ground-up rebuild” from the 3ME and BME teams, 3ME Chief Business Development Officer, Steven Lawn, told IM back in 2020.

This included removing all diesel internal combustion engine components, except the transmission and drivetrain; modelling the expected duty cycle at Tritton; developing a battery-electric system to suit the application at hand; writing the vehicle control unit software; integrating the system into the existing platform; and providing a mechanical overhaul of the machine.

Just last year BME was given a boost in its pursuit to electrify the mining sector, being awarded a A$4.55 million ($3.13 million) grant to build heavy-duty battery-electric vehicles for underground hard-rock mines as part of the Australian government’s Modern Manufacturing Initiative (MMI).

Not long before that, it signed a ~A$140 million deal with 3ME for the supply of upwards of 150 Electric Vehicle Engine packages over the next five years to power its 20 t Integrated Tool Carrier BEV retrofits.