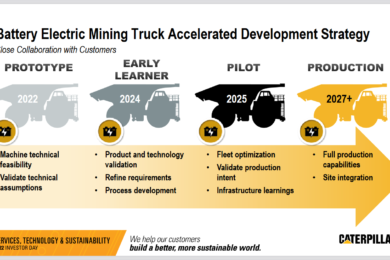 In its 2022 Investor Day presentation on May 17, Caterpillar Inc through Group President of Resource Industries – Denise Johnson – gave more insight than before on the timeline for development and introduction of its battery electric zero emissions mining trucks.

She mentioned first of course the zero emissions machine agreements that have been made with customers to date with BHP, Rio Tinto, Newmont, Teck and NMG. “These agreements are primarily focussed on the deployment of battery electric zero emissions trucks…we are focussed initially on introducing four zero emission truck models. Why trucks – 60-80% of Scope 1 site emissions are attributed to diesel powered trucks. They’re the most plentiful mining machine onsite and as a result have the most emissions. We are working with these customers to place the trucks, the infrastructure and the technology on their sites to allow us to validate the extremes – long haul roads, deep pits, high altitude, extreme hot and cold conditions. And hit the timelines for beginning introduction before 2030.”

Then Johnson moved on to the zero emissions mining truck timeline – and gave more insight than has been given before on the next steps. She revealed that it is working initially on having four available models. It is already clear this will include a battery version of the 231 t 793F (Cat’s lineup previously included the electric drive 793F AC) and electric drive 297 t 794 AC as these have already been referenced as part of its agreements with Rio Tinto (deployment of 35-strong zero emissions and autonomous 793 fleet at the new Gudai-Darri iron ore mine in Australia) and Teck Resources (30 Caterpillar zero-emission vehicles including Cat 794 ultra-class trucks in Elk Valley Coal beginning in 2027). Plus it seems likely that the other two models will be based on the remaining two units in its existing electric drive line-up – the 796 AC (327 t) and 798 AC (372 t).

She then had this to say on actual dates: “Our accelerated development will be done at customer minesites. By later this year we will have prototypes running at our Tucson Proving Grounds, where we will validate our technical assumptions and complete machine technical feasibility. By early 2024, we are sending what we call early learner units to customer sites where we will refine the requirements and do process development and product and technology validation. The pilot phase begins in 2025 where the goal is to validate multiple trucks at the site; focused on fleet optimisation, including autonomy, getting infrastructure learning and also validating the production intent units. We intend to begin with full production in the 2027 timeframe.” 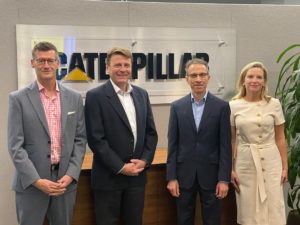 She added that Cat is also uniquely positioned to support mining sustainability through its power generation and power management capabilities, collaboration with customers directly on the minesites on things like microgrid development; and autonomy being extended to include integrated power optimisation including autonomous management of machine battery charging as well as the power needs of the collective minesite assets as a whole. “We believe that electrified machines will need to be fully automated to be optimised.”

On electrification, Johnson concluded: “So this journey is going to require learning, it is going to require a lot of collaboration with our customers and its going to entail significant transformation of equipment and site infrastructure. Its going to be a pretty exciting and complex journey.” She also pointed out that the power requirements for running a minesite are going to be much greater than they are today with many more sources of power generation and storage. Renewables combined with storage solutions; plus recip or gas turbine energy generation. Power will also need to be much more distributed across the site – for charging mobile fleets, either via static charging or trolley charging. All of this equates to a lot of new investment, learning and change management.

The battery truck timeline was just one aspect of a wide ranging presentation. Under the broad theme of Equipment, Services and Technology, Johnson also discussed some of the Resource Industries division market growth drivers that are gaining momentum and how the division is competitively advantaged to capture that growth.

Of course the increased commodity demand due to the energy transition was cited as a major driver, with EVs, battery storage, wind & solar power, grid modernisation – and basic infrastructure upgrading – requiring greater volumes of copper, zinc, graphite, lithium, manganese, nickel and cobalt amongst others. But then also she highlighted other factors increasing the need for mining equipment investment – first off the fact that ore grades are declining which will mean more material movement, incrementally larger machines being used, and higher utlilisation of those machines. To give an example by 2030 around 30% more material will be required to be moved from surface mines to deliver an equal amount of copper. She then highlighted the importance of the increasing age of mining assets in the timing of investment in new machines – which was highlighted by a chart based on data from Parker Bay – showing the average mining machine age being 11.7 years old. Looking at the specific Caterpillar asset distribution – its average mining machine age is slightly above this figure at 12.6 years. “As machines age past about ten years, depending upon the hour usage and severity, two possible actions are required. The asset life can continue to be extended, up to a point, with major rebuilds. Or, a new asset is purchased. Both of these actions require investment.” 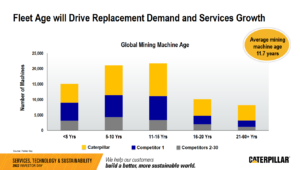 How is Caterpillar thinking about mining company investment requirements going into the future? “Customers have been very disciplined with their CAPEX spending during the past few years. And we believe the future landscape favours more substantial investments. Certainly with the high commodity demand we currently have; and the need for additional commodity capacity to be brought online, as well as the declining ore grades and the ageing mining equipment…and the need for investment in technology and infrastructure to meet ESG goals.” All this against a backdrop of strengthening miner balance sheets.

“We believe total mining capital expenditures are poised to grow. At Caterpillar one of the ways that we have positioned ourselves as the mining OEM of choice is to focus on driving customer success and customer value.” How does Cat do this? “It starts with an understanding of the customers’ pain points and how to solve their biggest challenges. ESG, uptime, lowering cost, safety, availability of service parts – all can play a role in customer success.”

Caterpillar says it often gets up to 2.5 times the initial new machine cost in parts sales, while over 60% of machines are sold with a Customer Value Agreement (CVA) and with over 70% utilisation of remanufacturing opportunities by customers. Rebuilds and remans can offer customers two, three or even more extra lives for their machines plus they have an added environmental benefit. CVAs provide assurance and support on availability of critical components or full machines, especially those with high utilisation. “In RI the ultimate is the Job Site Solutions CVA – where we can monitor and manage the maintenance of an asset with a fixed cost per hour agreement.” 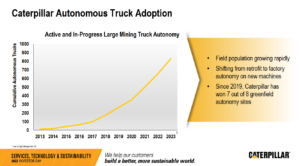 The level of digitalisation is also growing within the division, which includes real time asset health, safety and productivity monitoring, with over 78,000 connected assets, which continues to grow. “We believe the ability to rebuild and maintain high performance is a competitive advantage for Caterpillar. And its also one of the reasons that our assets last longer than historical norms…this gives our customers more flexibility as they develop transition strategies to meet their ESG commitments.”

Moving on to Caterpillar and autonomy, Johnson gave some new numbers – 20 sites with 11 different customers across North and South America and Australia, with around 30% productivity improvement seen across these sites which cover oil sands, iron ore, copper, gold, coal and lithium. It has over 525 autonomous trucks actively running – the most in the industry, with over 4 billion tonnes moved safely with zero injuries and with over 155 million kilometres of autonomous driving accumulated.

A really interesting slide covered cumulative adoption of autonomous Cat trucks – with projections of the autonomous Cat truck population (including both active and in progress) passing 800 in 2023. Another important change is a shift from the dominance of field retrofit to “new” ex-factory autonomous trucks, while she added that since 2019, Cat has won 7 out of 8 new greenfield autonomy orders and that most discussions with customers on fleets, whether new or existing, involve autonomy. A cited reason for the increased autonomy growth is the changing economics – back in 2013, autonomy was being deployed only at the largest minesites – since then as the economics have improved, Command for hauling has been rolled out at progressively smaller mines to the point where it is now viable for mines with fleets of less than 20 trucks – and in 2022/2023 Cat autonomy will be deployed to sites with as few as 12 trucks. This means potential for a much larger customer base across smaller mines, quarrying and aggregates.

So what differentiates Command for hauling? First and foremost she highlighted that the projects are Cat-led with Caterpillar on-site helping to lead the improvement. Together with its dealers it has a site services growth focus. The autonomy business model includes hardware, software and an annual license fee but the ultimate model will be a complete site autonomy focus covering equipment, services and technology. 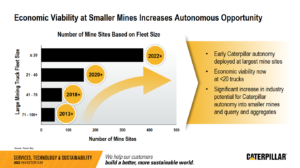 Johnson added: “We can run our autonomous trucks at maximum speed in extreme conditions. We’re constantly improving our cycle time to maximise productivity across the site versus just on a single machine – scalability. We have deep machine integration with our software plus we are continually applying our software upgrades onsite to improve performance.” The expansion of the autonomy platform down into smaller mines and construction has been strengthened by important M&A activity over the years including Minetec, Peck Tech and Marble Robot (now Cat Robotics). She also pointed out that it isn’t all about autonomy of large mining trucks in that autonomous technology both full autonomy and remote control now span the whole RI portfolio including underground LHDs (and coming to underground trucks), wheel loaders, surface drills, dozers and service vehicles like water trucks.