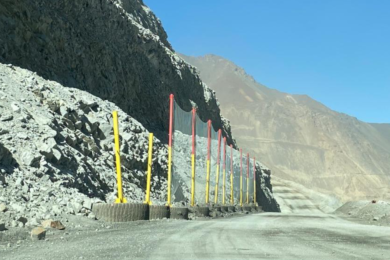 About 1.2 million litres of diesel per year is what is consumed on average by a large mining truck, which causes the emission of 3,500 t of greenhouse gases (GHG), for which it is essential to look for clean alternatives, if the industry wants to meet its decarbonisation goals. In this context, a Mining Trolley System Webinar was held on May 12, organised by the GIZ Renewable Energy and Energy Efficiency Program, together with the Chilean Ministry of Energy and Energy Sustainability Agency plus was sponsored by SONAMI. It was attended by more than 120 people.

Edgardo Pabst, head of Autonomy and Electromobility at Antofagasta Minerals’ Minera Los Pelambres copper mine, outlined a project planned by the operation, which consists of implementing a trolley system, first of all on the truck’s uphill ramps, since in those sections approximately 70% of diesel consumption is produced. It will consist of one lane of a two lane ramp, which will allow for trucks coming behind to leave the trolley and overtake a stopped truck still on the line using conventional diesel power if needed, though this is considered unlikely. The costs of widening ramps and having two conventional lanes and one trolley lane on the ramp are considered too high.

Pabst highlighted the advantages of this system, such as the use of electricity from renewable sources, which would make it possible to decarbonise transport, taking advantage of all the power available in the truck’s electric traction motors. Plus the increase in speed, and the maximising of productivity. In addition, he pointed out that a cost reduction of up to 50% is expected, which would allow the investment to be recovered in 3 or 4 years. He also commented that on a loaded climb, it should be possible to increase speed from 10 km/h to 18 km/h.

On combining trolley with autonomy he stated: “At the moment we are looking to do the work with conventional staff operated trucks, although it is logical to think that in the future the trolley will be compatible with autonomy. Everything depends on the developments that are made at the technological level, but there is no fundamnetal incompatibility that does not allow the use of trolleys with autonomous trucks.”

“Our goal is to reduce our GHG emissions by 30% by 2025, so this project is essential since these trucks are responsible for about 80% of total Scope 1 emissions,” says Pabst. Finally, it was indicated that the trolley system is projected as a first step in reducing emissions and decarbonising mining processes. This would be fully compatible with and complement battery and/or fuel cell (H2) technologies.

He said that a downhill ramp trolley system has also been considered as a second stage for power regeneration but not as part of the initial plans in order not to overload change management capacity and so allow for a smoother transition. “It is a pilot in terms of seeking to validate a certain KPI and achieve an analysis of how the system fits into a fully operational mine without creating major disruptions.”

Specifically when asked about costs he commented: “The cost of retrofitting the trucks will likely decrease as the number of retrofits increases. Today it is reasonable to consider $1 million for each retrofit. Regarding the line, the most expensive component is the electrical substation, which we could estimate with an approximate cost of $2 million for each one. It is probable that one substation will be required for every 2-3 trucks, based on a plan to complete a 2 km trolley ramp where there could be up to 6 connected trucks. Simultaneously, it will probably be necessary to have 2 or 3 substations. This is key when establishing the project planning. Civil works, depending on the construction method should add $1 million per km built.” The costs equate to about $5 milllion per km of trolley line built, just for the line not including the truck conversion. As regards the retrofit, the main mine fleet consists of diesel-electric drive Komatsu 930E-4 models.