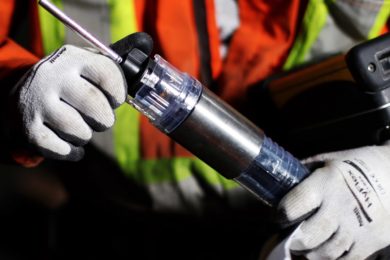 An ongoing research project at LKAB’s Kiruna underground iron ore mine in Sweden is aiming to apply the latest underground blasting technology. The project concerns wireless in-hole primers – and a safer and more efficient mine. “We began underground testing in early May and, in June, we plan to conduct the initial assessments,” says Michal Grynienko, Engineer at LKAB in Kiruna.

Orica, the explosives and blasting technology major, and Swedish iron ore mining group LKAB are working together on the use of wireless underground blasting technology including elements of Orica’s WebGen™ system. “Right now we are conducting tests in production area 41, at level 1051, in the Kiruna mine,” says Grynienko.

Unlike conventional underground blasting, where the pattern of multiple blast charges is linked together with, among other things, pentrite, so-called detonating cord, wireless blasting is exactly as the name implies – wireless. There is no wire network and no detonating cord, which is the conventional method of linking the blast group and the initiator. The wireless blasting technology is based on wireless primers which are inserted into a series of holes that are drilled upward into the orebody.

“Developing this technology has many advantages. Above all, safety, since technicians are exposed to less risk during priming, that is to say, the preparatory work of hooking up all the wire network and detonation cords,” says Grynienko, continuing, “this operation is completely eliminated, thanks to this technology.” A further improvement is the possibility of detonating more blast holes. In other words, blast holes that have been damaged or are unstable can be fired more successfully.

A wireless primer is a rod that is inserted upward into the charged drill hole. Each primer consists of a battery/receiver, a booster and a detonator, basic components for blasting. Thus, the primer is three components integrated into a single component. The technology also comprises an antenna, a transmitter and a receiver. The transmitter generates and sends a signal via the antenna and a receiver in the primer picks up the signal,” explains Grynienko.

The signal initiates blasting from a distance, just as it would if blasting were initiated manually via a handheld transmitter control. The system’s communication uses an antenna, which is placed about 250 m from the blasting area, while in the case of a handheld transmitter control, the device must be placed much further away. This means that blasting can be initiated from a distance, even from surface level, far away from the blasting area.

“The magnetite poses certain challenges, due to its magnetic properties. This places high demands on the system, in terms of registering the signals,” says Grynienko. The wireless primers can sit dormant in the blasting group for about 30 days prior to the actual initiation of blasting. This is a flexible solution that will be tested in several areas that place particularly high demands on the design of the blasting pattern and progression, for example, when new production areas are opened.

“These primers are compatible with our explosives, the emulsion we use, which is a precondition for testing this technology,” says Grynienko, continuing, “this is a very extensive project and collaboration began about four years ago. We have been working very closely with our production people and with Orica to realise the project.”