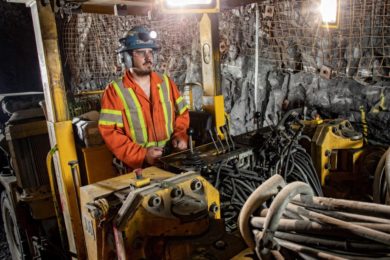 Following further exploration success, Alamos Gold Inc has upgraded its expansion plans for the Island Gold mine in Ontario, Canada.

In the results of the Phase 3+ Expansion Study for Island, the company outlined a larger, more profitable and valuable operation than the Phase III Expansion Study released in 2020. This 2020 iteration looked to expand throughput to 2,000 t/d, from 1,200 t/d, through a shaft and paste plant build, costing $1.07 billion. It would result in output rising to 236,000 oz/y starting in 2025 at mine-site all-in sustaining costs of $534/oz.

Based on the results of the P3+ Expansion Study, the company says it is now proceeding with an expansion of the operation to 2,400 t/d.

This development would see average annual gold production of 287,000 oz, starting in 2026 upon completion of the sinking and equipping of a 1,373-m-deep shaft. This represents a 22% increase from the previous study and a 121% increase from the mid-point of 2022 production guidance of 130,000 oz.

This infrastructure was all incorporated into the 2020 study with several scope changes to accommodate the 20% increase in production rates to 2,400 t/d including a larger mill expansion and paste plant, as well as accelerated development to support the higher mining rates. The Phase 3+ Expansion also includes 30% more development over the mine life to accommodate the 43% larger mineable resource.

With no significant capital expected to be spent on the company’s other development project, Lynn Lake, until the P3+ Expansion is well underway, Alamos said it is well positioned to fund the expansion internally while generating strong free cash flow over the next several years.

John A McCluskey, President and Chief Executive Officer, said: “Island Gold continues to grow in every sense with our planned Phase 3+ Expansion driving the value of Island Gold to $2 billion at current gold prices. Mineral reserves and resources have increased to 5.1 Moz, supporting the Phase 3+ increase in production rates, which will create a bigger, longer-life, more profitable and valuable operation.

“As a producing mine with a well-understood cost structure, this expansion is low risk from an execution perspective, and has a significantly reduced carbon footprint. The exploration story continues to unfold with a mineral reserve and resource base that has nearly tripled over the past four years, and with the deposit open laterally and down-plunge, we expect Island Gold will be one of the lowest cost and most profitable mines for decades to come.”