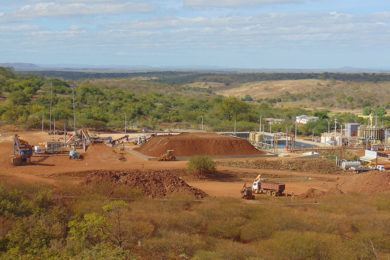 Brazilian Nickel plc has announced that, after an 18-month construction and commissioning period, continuous nickel production has begun from the Piauí Nickel Project (PNP) in Brazil.

The first nickel hydroxide product (NHP) was produced from the world’s first standalone nickel laterite heap leaching operation recently, with initial production from the PNP1000 ramping up to produce 1,400 t/y of nickel in NHP at a later date.

In 2016 and 2017, Brazilian Nickel successfully demonstrated large scale heap leaching, purification and recovery of nickel and cobalt from Piaui ore. The company has expanded the existing demonstration plant to develop the PNP1000 operation.

The full-scale PNP operation could produce an average of 25,000 t/y of nickel and 900 t/y of cobalt, according to the company.

Mike Oxley, Chief Executive Officer, said: “We are a producer! Although only a junior mining company with a small team and budget, we have successfully put the PNP1000 into operation. The production of nickel and cobalt at PNP1000 is a great achievement for the company. We are particularly proud to be bringing online a new stream of critical metals in this current environment where there is a growing need for a secure supply of nickel and cobalt which is required in green technologies, such as electric vehicles and solar panels.

“I would like to publicly share my enormous appreciation for the great work carried out by the team. Given the global disruptions of the last couple of years, what they have achieved is stunning and I am immensely proud of them, particularly because so many of the team are from the local project area. Through their hard work and dedication, they have shown how the simplicity of the heap leach processes can lead to rapid commissioning and start-up such that the challenge of supplying ever increasing demand for nickel to global markets can be met. Well done!”

Anne Oxley, Technical Director, added: “This is a huge step for Brazilian Nickel as we become a nickel laterite heap leach producer. Producing nickel in NHP from our low-carbon process will help the planet’s race to combat climate change. The product will feed the ever growing demand from electric vehicles.

“The knowledge and skills that have been developed over this process will be invaluable to the final delivery of the larger PNP operation. Production at PNP1000 will further develop the skills of our team and capabilities of our systems and processes.”