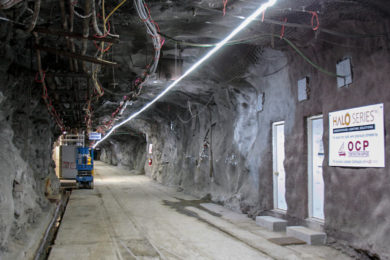 The Honourable Patty Hajdu, Canada’s Minister of Indigenous Services and Minister Responsible for FedNor, has announced an investment of C$1.3 million to enhance and expand the capabilities of the NORCAT Underground Centre with a series of initiatives in direct alignment with the federal government’s Critical Mineral Strategy. This includes, among others, the mandate to drive critical mineral research, innovation and exploration to boost the supply of critical minerals to grow domestic and global value chains for the green and digital economy.

During the announcement, Minister Hajdu explained that “the shift to green technology presents so many opportunities for Northern Ontario. With the ever increasing global demand for electric vehicles and our robust supply of resources and expertise, Northern Ontario is ready to deliver. This investment in NORCAT accelerates our emerging Battery Electric Vehicles market and supports a successful and sustainable tradition to a low-carbon economy.”

Known worldwide as the global “one-stop shop” for all that is the future of mining technology and innovation, the NORCAT Underground Centre enables companies from around the world to develop, test, and demonstrate emerging technologies in an operating mine, creating a vibrant ecosystem that has become the destination to see and touch the future of the mining industry. Using this “active laboratory,” NORCAT says it helps to connect and broker relationships between mining technology companies and global mining companies creating an economic development and technology commercialisation engine like no other in the world.

Evidenced by the establishment of the Northern Ontario Regional Technology Development Site, announced in May 2022 by Ontario’s Vehicle Innovation Network (OVIN), NORCAT, and Northern Ontario more broadly, have been recognised as a leading ecosystem for the deployment of industrial BEVs. Speaking after the funding announcement, NORCAT CEO Don Duval explained that the C$1.3 million investment from FedNor will allow NORCAT to procure and deploy a battery-electric load-haul dump (LHD) machine and implement corresponding supporting infrastructure, including underground charging stations, to meet this growing demand for technology development, testing and demonstration of industrial BEVs. Additionally, the funding will allow NORCAT to expand its outdoor “surface track” testing facilities to enable companies to develop, test and demonstrate emerging mobile and electric technologies in a “rugged surface mine” equivalent environment.

Pivoting from alignment with one pillar of the Critical Mineral Strategy to another – that of growing a diverse workforce and creating prosperous communities, Duval emphasised that BEVs are doing much more than just changing how miners mine – it’s also changing how people think about a career in mining. “The NORCAT Underground Centre is also used as a platform for hands-on, experiential training for new and current mine workers, including students of our flagship Underground Hard Rock Miner Common Core program.” advised Duval. “The opportunity for our students to learn how to operate a battery electric LHD in an operating mine that also serves as a place to support and engage with other emerging technologies, reshapes the national paradigm surrounding what a career in mining actually looks like.”

Noting that the Mining Industry Human Resources Council forecasts that approximately 100,000 new workers will need to be hired before 2030, Duval reiterated that “expanding and enhancing the NORCAT Underground Centre to support the development and commercialisation of emerging technologies will inspire, encourage, and educate the next generation of would-be mine workers about the exciting and diverse career opportunities in this new economy.” Concluding the announcement, Duval reminded those in attendance that the NORCAT Underground Centre will open its doors to the mining industry in September 2022 for Mining Transformed, the world’s first tech exhibition in an underground operating mine. With close to 40 technology companies demonstrating, the Mining Transformed exhibitor list features a broad spectrum of companies that offer leading-edge, groundbreaking technologies that are poised to solve the many intractable challenges facing the industry, both today and in the future.