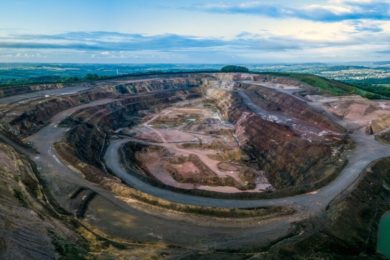 Tungsten West PLC, the mining company focussed on restarting production at the Hemerdon tungsten and tin mine in Devon, England, has concluded a re-evaluation of the options for bringing the Hemerdon Mine back into production and announces its new development plan. The plan has been developed in response to global crises in power and diesel prices and the general inflationary environment for construction materials faced by the company. Accordingly the company has undertaken a re-optimisation of the March 2021 Bankable Feasibility Study (BFS) in light of these increased cost input factors.

The Board of Tungsten West has reviewed the plan and has also received a preliminary independent assessment from consulting metallurgist Mike Hallewell of MPH Minerals Consultancy Ltd, who concurs with the plan in all material aspects. The Board has also now given its approval to proceed with detailed engineering design and to commence construction of the Hemerdon Project with immediate effect. The plan continues to envisage restarting production during H1 2023.

The plan has been developed after a three-month technical and commercial review of the assumptions that underlaid the BFS. Evaluation of different approach options has resulted in a new ramp-up schedule, new crushing strategy, new operating parameters for ore sorting, a re-purposing of equipment within the processing plant, and the production of a different specification of final tungsten concentrate product. The result of the plan is a lower cap-ex requirement and a much lower diesel and power consumption whilst still delivering profitable operating margins.

The company intends to continue investigating trade-off studies, continued value engineering and detailed cost estimates for the project whilst it finalises the detailed design and front-end engineering for the project. MPH will continue to work with the company in further optimisation and implementation of the plan. The project continues to benefit from current planning permission, a pre-stripped open pit along with significant infrastructure and sunk costs from previous operators. Under Tungsten West’s ownership a complete refurbishment and upgrade of the processing plant has been undertaken with large sections of this project now complete.

In more detail on the crushing side, the BFS planned refurbishment of the existing primary and secondary crusher building has been replaced with the planned installation of a newly located semi-mobile crushing circuit utilising direct tip into the primary crusher. This reduces CAPEX, but more importantly OPEX by removing ROM pad double handling of ore.

As regards ore sorting, under the BFS seven ore sorters were planned to operate accepting 30% of the ore mined whist rejecting the remaining 70% as waste (“30% accept rate”) which would result in recovering circa 88% of the tungsten at that stage. The new plan utilises just four ore sorters which will be run at an expected 9% accept rate for a circa 76% stage recovery. This allows a lower volume of higher grade ore to be processed at the concentrator stage which again reduces both OPEX and CAPEX.

Due to the lower accept tonnages being fed into the processing plant the current primary dense media separators are able to be replaced with repurposed secondary and scavenger dense media separators. This substantially reduces OPEX and CAPEX. Due to the higher grade feed into the plant stage recoveries are expected to improve during this stage. In addition, Tungsten West intends to produce a 45% WO3 concentrate rather than the previously planned 52% product by removing the reduction kiln from the refinery process. This will result in a slightly lower payability (circa 2% lower) but this is more than offset by increased recoveries due to the forecast losses in the kiln. Approximately 1.4 million litres per annum of diesel consumption is removed by not using the kiln. The overall effect of the above changes is to reduce energy consumption within crushing, ore sorting and the processing plant by circa 30%.

In terms of mining, Hemerdon will aim to process 2.1 Mt of ore in year one, 2.6 Mt in year two, before ramping up to steady state production of 3.5 Mt throughput in year three (the BFS envisaged year one at 2.7 Mt rising to steady state throughput of 3.5 Mt). This targets WO3 in concentrate production of 2,200 t, 3,000 t, 3,900 t, and tin in concentrate production of 320 t, 430 t and 600 t in years 1, 2, and 3 respectively. A significant amount of waste stripping is able to be deferred to year 2 under the new mine plan, accelerating time to positive cash flow.

Final cost estimates and the associated definitive construction schedule for the plan are still being received but the internal cap-ex estimate is in a £26 million – £36 million range. Of this, £3.1 million has already been spent on new equipment. This compares to the BFS CAPEX estimate of £35 million. At the time of the 21 April 2022 announcement due to the inflationary environment caused by the prevailing economic conditions the CAPEX estimate for the BFS plan had increased to £54 million.

Tungsten West announces that CEO Max Denning will leave his role and the Board with immediate effect. Max was a Co-Founder of Tungsten West and the Board has thanked him for his significant contribution during the company’s formative years. Executive Vice-Chairman Mark Thompson has assumed the responsibilities of the office of the CEO. Mark Thompson was a Co-Founder of Tungsten West and has previously held senior management positions at commodity trader Trafigura and its investment division Galena Asset Management, global private equity fund Apollo Management as well as several junior mining and exploration companies. He is currently a director of TSX listed Meridian Mining and an advisor to LSE listed First Tin.

An operations and project delivery consultant is being engaged to strengthen management capabilities and reporting during the construction phase. Their remit will be to build the Hemerdon Project on time and on budget, with due regard for the safety of employees and contractors during construction together with the quality and operability of the completed facility.

As of 30th June 2022, Tungsten West had cash on hand of £22.9 million. Allowing for contingencies and working capital costs the company will seek to raise debt or other non-equity capital to execute the development of the project without additional dilution for shareholders. The company is in discussions with financing partners to provide this additional capital.