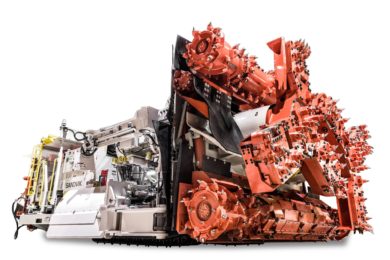 Potash mining is booming, a combination of fertiliser demand globally in conjunction with world events affecting supply from Russia and Belarus. And, as with other types of mining, a major focus for operators, existing and new, is reducing GHG emissions, while at the same time increasing efficiencies. BHP from the outset wanted to make its new Jansen potash mine in Saskatchewan as automated and as emissions free as possible. A low water footprint and low emissions were embedded in the mine design and mining method from the beginning.

In Stage 1, the mine is expected to produce approximately 4.35 Mt/y of potash. Jansen Stage 2 would then add around an additional 4 Mt/y. Across all four stages at Jansen, BHP has a long term roadmap to between 16 and 17 Mt of annual production. For now, global events have brought first planned production from Stage 1 forward – the company is now looking at late 2026 first production instead of 2027.

On the technology side, at the recent Bank of America Smartmine conference in June 2022, BHP Chief Technical Officer, Laura Tyler said: “Jansen will be the most advanced and sustainable potash mine ever built. As a new operation, we do not have to retrofit technology and we can install at design. It will be difficult, if not impossible, for existing potash miners to retrofit and recreate the operational advantages that we are seeking to capture over the next couple of years. For example, during design we wanted to provide a proven alternative to the conventional active borer technology, so we partnered with Sandvik to look at the options…we will introduce a high degree of automation, integrated design and eventually a remote operation centre like we see at WAIO, BMA and Escondida to drive the borers of the future. We will be connected to it from surface, potentially even from Saskatoon.” 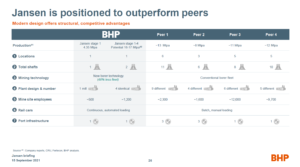 Jansen is expected to emit ~50% less CO2e per tonne of product versus the “average performer” in Saskatchewan potash mines. Underground mining and support fleet will be more than 80% electric, but BHP will pursue 100% electrification as well as aiming at all carbon neutral electricity through commercial partnerships. It will also look to implement technologies like carbon capture and storage to mitigate natural gas emissions in the processing plant.

Tyler added: “Stage 1 will have just four mining systems, capable of producing the equivalent of 10 to 14 typical systems, able to monitor the ground ahead and adjust its mining height to match the orebody. This is a sustainable advantage, with around 60% less fleet creating around a 10% operating cost saving as well as fewer active mine faces, so therefore increasing stability, and a smaller environmental footprint. Jansen, we believe, will set a new benchmark for equipment and decision automation in the potash industry. We will have three times the number of process sensors and 10 times the number of machine health monitoring sensors compared to the next largest producer in Saskatchewan.”

This, married together with the latest processing technology, means BHP expects to achieve an industry–leading recovery rate of around 92%, and Jansen Stage 1 will have approximately 50% less carbon emissions per tonne than the average in the basin and approximately 60% less fresh water consumed on the same basis. The high recovery rates will be enabled by separate fine and coarse flotation with on-stream analysis and crystallisation which recovers fine potash from waste streams.

Mining will be some 900 m underground, excavating the top of the Prairie Evaporite Formation. There are three main potash bearing members present in the Prairie Evaporite Formation. Two are present in the Jansen area consistently – the Patience Lake and Belle Plaine members. Mineralisation within the potash layers consists of a layered, repetitive sequence of sylvite (KCl) with halite (NaCl) and thin layers of insoluble dolomitic clay material. Mineral Resources for Jansen are based on the Lower Patience Lake (LPL) potash unit and a seam thickness of 3.96 m from the top of the 406 clay seam was used. The actual mining height will be variable between 3.7 m and 4.4 m, with an average cutting height of 3.8 m; the stability of strata overlying the 406 clay seam drives cut heights greater than the targeted mineralised zone. With the exception of the shaft pillar area, all excavations are expected to occur in the LPL.

Borer miners and accompanying Extendable Belt Systems (EBS) make up the selected mining system for continuous mining in production rooms. A network of conveyor belts transport the ore from the working face to the shaft area for hoisting at the service shaft. Production mining is supported by a fleet of continuous miners, battery haulers, LHDs, maintenance vehicles, and personnel carriers. So BHP is bringing together the new ultra large borer miner design with an advanced conveyor system as well as BEV rubber tyred equipment.

Simon Thomas, President Potash at BHP, recently commented: “At Jansen we are striving for the lowest carbon emissions per tonne in the potash industry. Electric mining equipment, like those provided by Sandvik, are important to helping us meet our environmental goals. They are also a key tool that will help us ensure improved health and safety objectives for our employees underground, while also achieving our productivity targets.” 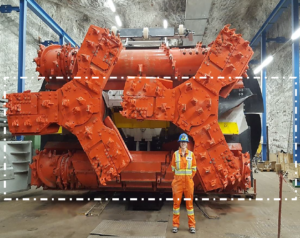 The ultra large borer miner – the cable-powered Sandvik MF460 – will be teamed with a Sandvik PO140 EBS. This integrated system is notable for being much larger than other mining machines in the Saskatchewan Potash basin. Four of these systems, developed in close cooperation with Sandvik, will each be capable of about 2.7 Mt for a total potential production capacity of 10.8 Mt/y. The MF460 led system means less workers, so a lower labour cost per tonne, but also a lower overall equipment cost per tonne of potash produced which it believes will give an operating cost advantage over other Saskatchewan potash majors like Nutrien and Mosaic.

The MF460 will cut a width of 6 m per cut (and as stated a height of up to 4.4 m). One cut and a return cut will be up to 1.8 km in length, leaving a room of 12 m wide. The full face mining machine has a cutting head that can vary in height and will have ground penetrating radar, to minimise dilution while managing ground conditions. The MF460 machine integrated with the EBS has been in development by Sandvik and BHP for more than a decade to de-risk this new approach, including a full-scale underground trial in a salt mine in Heilbronn, Germany that has been running for several years. In addition to the borer miner led mining system, Sandvik is also supplying a fleet of battery electric LHDs which will be integral to the support of Jansen’s underground operations. BHP has ordered 10 underground battery electric loaders along with one electric tethered loader.