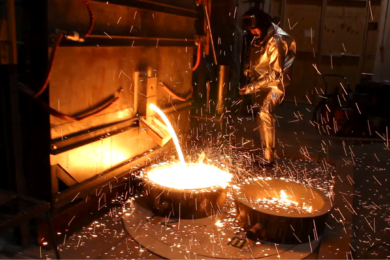 Boston Metal is looking to decarbonise the steel-making sector at the same time as helping iron ore producers with their Scope 3 emissions dilemma.

The concept of ‘green steel’ has been widely discussed over the last few years, with LKAB, SSAB and Vattenfall’s HYBRIT project being the most cited case study, thanks to both its advanced stage of development – it has already produced fossil-free steel on a trial basis – and its revolutionary way of introducing hydrogen in place of coke as the iron ore reduction method in the steel-making process.

SSAB and LKAB are leveraging HYBRIT to completely transform their production processes: SSAB is building new hydrogen-based steel making facilities able to match its current base of 8.8 Mt/y of steel by 2030 and LKAB is moving from iron ore pellet production to direct reduced iron (DRI) in line with this.

The ambitions of such a project are impressive, but can such a green steel-making process be applied to the circa-1,900 Mt of steel currently being produced for the world market?

The answer is no, according to Tadeu Carneiro, Chairman & CEO of Boston Metal.

He expands on this: “There are four ways of reducing iron oxides into a metal for steel-making. One is through the use of carbon; another way is through using another metal as a reductant, which is currently not feasible; the third one is with hydrogen, which is possible – as HYBRIT has shown – but is limited to premium iron ores; and the last is through our solution.”

The solution in question is – like HYBRIT – a green option, but – unlike HYBRIT – is applicable to all iron ores, regardless of grade, according to Carneiro.

Boston Metal’s process, which it calls Molten Oxide Electrolysis (MOE), works by adding iron ore to an electrolytic cell and passing electricity through said cell. The electricity both breaks the bonds of the iron oxides present, as well as heats up the whole batch within the cell, creating molten iron that sinks to the bottom of the cell ready for collection (tapping).

During the bond breaking and heating process, MOE produces oxygen as a by-product, with the resultant oxides forming the electolyte and remaining in said electrolyte (floating above the liquid iron).

“Because it is molten, the iron gets separated from the electrolyte and sits in the bottom of the cell,” Carneiro said. “As the molten iron is heavier than the electrolyte, the impurities float to the top and can be tapped separately.”

So, not only do companies using MOE get a molten iron product, they also get a slag by-product that can be used in various applications in the construction industry – all without using coking coal or coke. 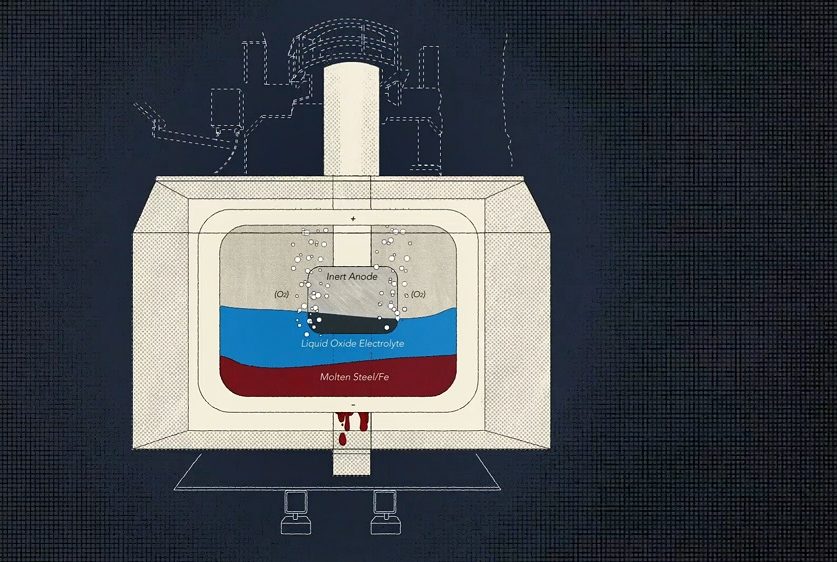 “In traditional blast furnace-based steel making, you have to pelletise or sinter the iron ore, you need to process coking coal into coke and you then have to mix the two in the blast furnace and blow air to get pig iron,” Carneiro explained. “This pig iron contains around 4% carbon, which needs to be burnt off through, typically, a process in the basic oxygen furnace to get molten iron.”

Boston Metal’s MOE process gets to this same point using just iron ore and electricity, according to Carneiro.

“All of this is replaced by a battery of cells that, when assembled in significant numbers, can compete with blast furnaces in terms of molten iron capacity,” he said.

Carneiro expanded on what he meant by ‘significant numbers’, offering up an example of 300 MOE modules assembled in two lines of 150 able to produce 1 Mt of steel.

This puts a green process in the reach of not only steel-makers but iron ore producers, according to Carneiro.

“If you have green electricity at an iron ore mine, you can bring the cells there, melt the iron and ship a metallic product to steel-makers,” Carneiro said.

This pure iron product can be remelted elsewhere and processed into flat and long steel products for the automotive and construction industries.

“This represents a higher value-added product for iron ore miners, enabling them to ship a product that is 40% lighter in terms of weight,” Carneiro explained.

It is no wonder BHP and Vale have been early backers of Boston Metal.

It sounds too good to be true, and there is a reason for that.

From speaking to Carneiro, the company could start producing molten iron through the chosen method today – not at a scale the steel-industry would yet consider commercial, but at a pilot scale at least.

For the commercial process to be considered green, the company would need renewable electricity to do this; and lots of it.

Carneiro doesn’t shy away from this, explaining that MOE will require 4 MWh of electricity per tonne of steel to work at such a scale. This is the equivalent of up to 500 MW for a 1 Mt/y molten iron plant.

The incumbent process Carneiro and his US-based team are looking to take market share from requires 5.5-6 MWh of energy per tonne of steel, while the electric arc furnace (EAF) method of making steel – which uses predominantly scrap metal – has a much smaller electricity requirement.

“If you had 2 billion tonnes of scrap to be melted, the EAF route is the best way to make steel, hands down,” Carneiro admits. “The problem is you don’t have such scrap availability and, in order to increase supply, you would need lots more steel coming from iron ore.”

For reference, the HYBRIT process is expected to require 600 MW of hydrogen electrolyser capacity to 2025 to get LKAB to the 1.3 Mt/y sponge iron (DRI) mark.

Yet, scrap steel is not the only thing in short supply currently. Green electricity is far from abundant, with only the likes of Quebec (hydro power capacity) and some Nordic countries having a plentiful supply – a fact Carneiro acknowledges.

“If you don’t believe that green electricity will be available, abundant, reliable and cheap in the future, you can forget about the MOE process,” he said. “But then you also have to forget about a lot of other processes that are set to use green electricity and the massive amounts of investment the green energy space is seeing on an annual basis.

Carneiro is planning for such a transition, with his company in the process of commissioning a full-size industrial MOE cell at its Woburn, Massachusetts headquarters. This could be ready as early as next month.

It follows a trial of a pilot cell at Brazil-based ferroniobium producer CBMM’s production plant in Araxá, Brazil, where the technology was able to use the same process to turn niobium ore into high-value ferroniobium-based products.

“We were able to prove out the process with CBMM on a smaller scale, which has given us the confidence to make a much bigger cell.”

The company plans to use this bigger cell and, through a subsidiary in Brazil, take advantage of other opportunities to extract value from mining waste using the MOE technology. This could see Boston Metal assemble a battery of MOE cells to manufacture some 5,000-10,000 t of high value-added metals.

While this is deemed ‘pilot scale’ for steel producers, it is sizeable for those producing high value-added products such as niobium, vanadium, tantalum, chrome and others, Carneiro said. And the project will only aide the company’s steel-making ambitions.

“By developing the cell for these high value-added metals, we are finding lots of the answers for the steel-sized cells as well,” he said.

Such groundwork today is preparing the company for a time when steel-makers and iron ore miners have assessed the green electricity landscape and are ready to invest in such technology.

“All the leading steel-making companies have made pledges to be carbon neutral by the 2050s,” Carneiro said. “This means they need to phase out carbon reduction by the mid- to late-2030s. By this point in time, we will be ready to offer our solution on a commercial scale, allowing them to take advantage of the abundance of iron ores – low and high grade – around the world.”