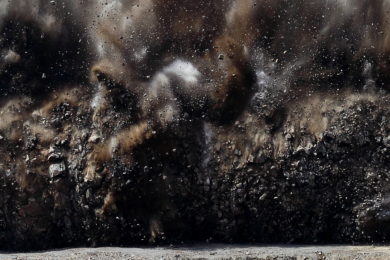 “The digital age has given us the opportunity to leverage the quality of our people, products and service – to optimise blast technology,” BME Managing Director, Ralf Hennecke, says. “Building on the flexibility and accuracy of electronic detonation, our digital tools can make mining more efficient and less carbon intensive.”

By collaborating with customers and technology partners, BME says it has developed solutions that can enhance output and are easily integrated – both between BME’s digital products and externally.

An innovation that has received global attention is BME’s electronic detonation system, AXXIS. Developed by an in-house team of specialists, AXXIS improves the quality of blasts and mine productivity.

Tinus Brits, Global Product Manager for AXXIS, says: “The entire system was designed in South Africa and built by our own engineering department. All the support and maintenance on the system is conducted by our dedicated in-house technicians.”

Applied in conjunction with BME’s Blastmap blast planning software, AXXIS demonstrates the value of product integration, BME says. Complex blast designs can be easily and quickly transferred from the Blastmap planning platform to the AXXIS initiation platform. Brits noted that Blastmap can also export to third-party initiation systems that a mining customer might already be using.

Among the capabilities that BME has brought to the mining sector are longer blasting windows to allow for larger and more productive blasts.

“Safety remains a key focus in mining, and a safe mine is a productive mine,” Brits said. “Our digital initiation systems innovate constantly to raise the level of safety in blasting – such as the dual basis of safety in our latest AXXIS Titanium system.”

These safety improvements build on the high-level safety of emulsions when compared with Class 1 explosives. Emulsions are inert until sensitised in the blast hole, so can be more safely transported and stored.

BME’s emulsions also contribute to environmental protection through their inclusion of used oil as a fuel agent. The company has developed a large collection network for used oil, which responsibly transports waste oil from users for its production process. After being incorporated into the emulsion, the used oil is safely disposed of when the emulsion explodes.

So extensive is this network that BME today collects around 20% of South Africa’s used oil, it says.

Sachin Govender, BME’s Used Oil Manager, said: “By using this waste oil in our emulsions, we are eliminating the use of diesel, which is a high carbon source. This plays a positive role in helping our mining customers achieve their ESG goals.”

Where customers have their used oil collected by BME, the initiative delivers a double benefit, according to Govender. On the one hand, it deals responsibly with a waste product that presents an environmental risk; on the other, it reduces the need for diesel as a fuel agent.

“There is also a positive social impact from our used oil initiative,” he said. “We engage small enterprises to collect the oil, which has an economic ripple effect in local communities.”

BME now has about a dozen approved suppliers across South Africa, according to Govender, which have created around 300 job opportunities.

“As we empower small businesses to create an income from this waste, we are conserving the environment while also promoting social upliftment,” he said.