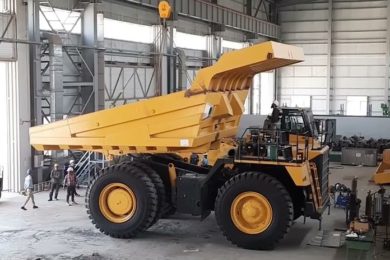 In July 2022, Komatsu Middle East and Karachi-based engineering firm Jaffer Brothers completed the assembly of the first of a new fleet of Komatsu 91 t HD785-7 haulers, the largest mining trucks introduced to date in Pakistan. The trucks have been imported for Sindh Engro Coal Mining Company (SECMC)’s Thar Block 2 Coalfield Project as it undergoes a major production rate increase.

This followed the February 2022 completion of the assembly of the first of a fleet of new Komatsu PC2000-11R units, themselves the largest mining excavators introduced so far into Pakistan. SECMC’s existing Thar Block II fleet consists of 130 Chinese 60 t TONLY TL875 wide body trucks for coal haulage which are loaded by 18 hydraulic excavators, mainly Komatsu PC1250 units.

The new larger capacity equipment is needed as the operation is expanding – mining began in July 2019 and by June 2022, 11 Mt of coal had been supplied to the captive 660MW power plant, saving some $700 million per annum for Pakistan in avoiding energy imports. This will be doubled from December 2022 onwards as the mine is expanding from 3.8 Mt/y to 7.6 Mt/y.

SECMC is one of two main lignite coal mining operators in the country, and is located in in Block II of the Tharparkar (Thar) area in Sindh province of Pakistan. It is a joint venture between the Government of Sindh (GoS), Engro Energy Ltd (formerly Engro Powergen Limited) and other partners.

The other main mine in the country achieved first coal production in February 2022 and is now ramping up. It is operated by Sino Sindh Resources Ltd (SSRL) which is located in Block I of the same Thar region and is owned by Chinese group Shanghai Electric Power Company Ltd. It comprises a 7.8 Mt/y open-pit coal mine feeding a 1,320MW coal-fired power plant (2 x 660MW). SSRL has a large mining fleet comprised of 55 t MT86D Chinese wide body trucks from LGMG loaded by 28 Liebherr R 9100B hydraulic mining excavators.