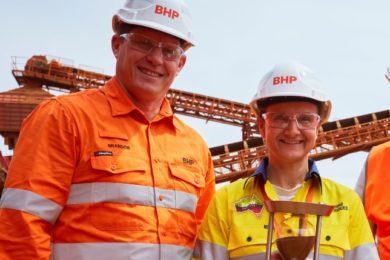 BHP has celebrated what it says is an historic agreement with PMW Industries and its Western Australia Iron Ore (WAIO) team, which will see the 100%-owned-and-operated Banjima Pilbara Aboriginal Traditional Owner business maintain a semi-mobile crushing and screening plant at its Mining Area C operation, in the Pilbara, supported by new strategic partner and Mineral Resources Limited owned company, CSI Mining Services.

Led by Banjima business owner, Paula White (pictured on the right), PMW will operate on country at the iron ore operation as part of this large-scale, long-term scope of work. It is expected to create up to 30 new employment and training opportunities for Banjima and Indigenous people.

The agreement builds upon WAIO’s existing relationship with PMW, which started more than three years ago through its Local Buying Program.

WAIO Asset President, Brandon Craig (pictured on the left), said he was proud of the growing relationship between BHP and PMW Industries, saying the crushing contract award was one of the largest in WAIO’s history.

“Our Mining Area C iron ore operation is on Banjima country – in line with our commitment to become the partner of choice for Indigenous people, this partnership is founded on respect and mutual benefit,” he said. “We are working hard to create more opportunities for Indigenous businesses to support the growth of Indigenous enterprise, partnering for the future.”

White added: “PMW Industries is very proud to be partnering with BHP and CSI to enable more employment and economic empowerment for Traditional Owners and Indigenous people. As a Banjima woman and business owner, I’m also delighted to be creating opportunities for other Indigenous women and young girls to follow their dreams.”

“At the same time, we are actively improving our sourcing systems and procurement processes, in partnership with Traditional Owner and indigenous businesses,” BHP says. “This was demonstrated with the PMW agreement, which followed a competitive Banjima-only tender, structured specifically to enable Traditional Owner businesses to operate on country.”