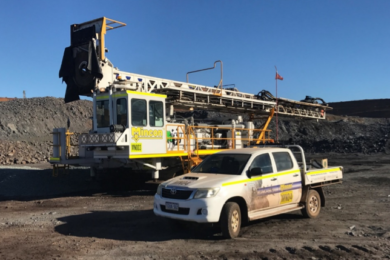 Mincon says it is pleased to announce the signing of the first commercial contract for its Greenhammer system. It said this milestone is the culmination of many years of development work and is the first step toward revenue generation “with a unique drilling system that has a transformational potential for Mincon and the hard rock surface mining industry.”

Greenhammer is a hydraulic DTH hammer technology and both 10 in and 12 in versions have already been extensively tested during development works, though there have been some pandemic related delays. Most recently, the system has been run on Mincon’s own rig at an iron ore mine in Western Australia.

The new commercial Greenhammer contract is with an unnamed “blue–chip mining contractor” operating on a major gold mine in Western Australia. The contract provides for the mobilisation of the Greenhammer system to be run on a Mincon – owned test rig as well as a full Mincon team to support drilling blastholes on an agreed price per metre drilled. The Greenhammer system is expected to be onsite at the mine and generating revenue early in Q4 2022.

Joe Purcell CEO of Mincon commented: “I am delighted to announce the signing of the first commercial contract for our Greenhammer system, that has the potential to be a multi–million–euro contract for our Group. This flagship technology development project has been the most ambitious undertaking that our engineering teams have delivered to date. It is a system that can deliver transformational productivity rates for large scale surface mining projects and thus offers significant energy savings to the customer.“

There is a shortage of drilling rigs as well as operators in the Western Australian mining industry so Mincon argues that the importance of Greenhammer is growing given its productivity potential.

He adds: “Our highly skilled team in Perth Western Australia is in the heart of one of the largest hard rock surface mining markets in the world and this is a huge opportunity for our Greenhammer system. We are hopeful that when the Greenhammer demonstrates its superior capabilities in a commercial hard rock mining environment that it will be taken up quickly by the wider hard rock mining community.”