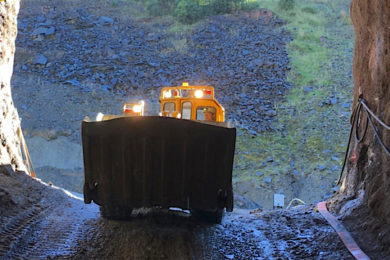 Northern Ireland-based gold miner Galantas Gold Corporation has announced that its subsidiary Flintridge Resources Ltd has appointed QME Ltd of Navan, Ireland, as a mining contractor to develop the access and exploration drives to the Joshua Vein at its Omagh Gold Project in Northern Ireland.

QME’s project scope comprises a total of 600 m of underground development and is expected to commence in January 2023. Development to an exploration drive is expected to be completed by May 2023, followed by access drives to two mining levels at the Joshua Vein in Q3 2023.

Mario Stifano, CEO of Galantas, commented: “This project is very exciting on two major fronts – to allow early detailed exploration drilling at depth on the Joshua Vein and simultaneously increase production capability from the Joshua Vein to supplement production from the Kearney Vein. This will greatly assist in fully defining resources at the Joshua Vein while bringing the Omagh Mine to a stable level of production. With intercepts such as 17.4 grams per tonne gold and 74.6 grams per tonne silver over a 13.1-metre intersect, we look forward to continued drilling success along the new exploration drive at Joshua.”

QME was founded in 1985 and is an experienced mining services provider engaged in mine development and the supply of new and re-manufactured equipment for underground and open pit use. QME is currently engaged in mining contracts in Ireland and Portugal and has prior experience in mining projects in the Republic of Ireland, Northern Ireland and Scotland. Current and past clients include Tara Mines, Dalradian Gold, Lundin Mining and Barrick Gold.