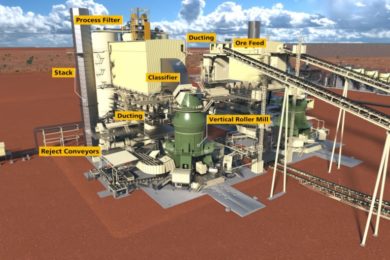 The OZ Minerals Board has greenlit the build of the West Musgrave copper-nickel project in Western Australia, paving the way for the development of a remote asset using dry grinding technology, autonomous haulage and a significant volume of renewable power.

West Musgrave is set to become OZ Minerals’ fourth operating asset when it starts producing concentrate in the second half of 2025, in the process becoming the company’s cleanest and greenest mine with plans to reach net zero Scope 1 emissions by 2038.

The feasibility study the board signed off on details a 13.5 Mt/y operation with average production of circa-28,000 t/y of nickel and circa-35,000 t/y of copper over a 24-year operating life. Coming with a A$1.7 billion ($1.1 billion) direct initial capital expenditure bill, West Musgrave could provide cash flow generation of circa-A$1.9 billion during the first five years of production based on OZ Minerals’ projections.

One of the interesting additions to the process flowsheet – which has been mentioned in previous economic studies – is the use of LOESCHE’s Vertical Roller Mill (VRM) technology.

Two VRMs will operate in parallel after the primary and secondary crushing circuit at West Musgrave, with OZ Minerals noting benefits in reducing power consumption by around 20%, supporting higher flotation recovery and the operational flexibility to be ramped up and down. The latter is particularly important given OZ Minerals plans to make West Musgrave one of the largest fully off-grid, hybrid renewable powered mines in the world with an initial circa-80% renewable penetration rate, powered off wind and solar energy with a battery energy storage system in tow.

Dr Thomas Loesche, Managing Shareholder and owner of LOESCHE, said: “As a mining engineer with a degree in mineral processing, it has always been a vision of mine to develop dry-comminution technologies that enable better sorting efficiencies, reduced power and consumables. We are very pleased to be involved in such an important project. OZ Minerals is breaking new ground and proving that sustainability does not stand in the way of project development, but rather makes such projects possible.”

The application of the VRM technology has been peer reviewed for the project by independent experts and has been de-risked through pilot test work campaigns, OZ Minerals added.

Further upstream of the VRMs, OZ Minerals has stated plans to operate the mining fleet remotely from day one at West Musgrave, with the acquisition of an autonomous haulage system-enabled fleet on a leasing basis in the feasibility study outline.

OZ Minerals did not include details of the size of truck involved in the latest study, but the prefeasibility study originally released in 2020 highlighted the use of up to 25 220-t payload haul trucks.

There is also potential for these haul trucks to be electric in the future, with OZ Minerals saying its pathway is aligned with the potential transition to an electric haulage fleet at the first engine change out.

While OZ Minerals says it has the capacity to fully fund West Musgrave with a new A$1.2 billion syndicated facility supported by key relationship banks awaiting final binding agreements, it said potential strategic partnership in the project via a minority interest was being explored.

The next steps for the project involves award of contracts with major partners – it has already signed up GR Engineering to build the process plant; increasing the capacity of its camp to around 250 beds by early 2023; mobilisation of equipment to commence earthworks; finalise the power purchasing agreement and Living Hub – the latter of which has 350 permanent ensuite rooms; and increasing its owner team resources in line with the plan, including operational-readiness personnel.