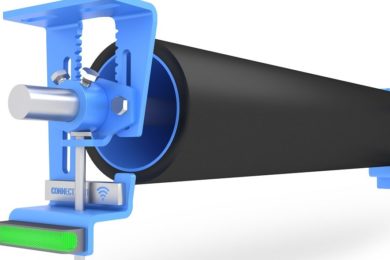 ScrapeTec is preparing to present the E-PrimeTracker, a conveyor belt alignment tool that, the company says, can sustainably protect people, the environment and conveying technology, at the upcoming Bauma 2022 event in Munich, Germany.

Wilfried Dünnwald, owner and developer of ScrapeTec, plans to present the functionality first-hand at the trade fair.

The PrimeTracker offers a special roller that detects belt misalignment and automatically compensates for it. In contrast to other solutions, the solution is not conical but cylindrical, with the subtle difference ensuring fast and automatic correction if the belt does not run centrally.

The PrimeTracker’s mode of operation is mounted centrally on an axis and can therefore “swing” freely in any direction to react sensitively and directly to the slightest misalignment and, by correcting it, allow the conveyor belt to run optimally again, according to ScrapeTec. lf everything is in order and the belt is running straight, the PrimeTracker simply acts as an idler.

ScrapeTec is now offering a further development: the E-PrimeTracker 4.0. Its self-regulating function on conveyor belts corresponds 1:1 to that of the PrimeTracker, with the E standing for the “electronic added value of this device”, which ScrapeTec’s developers have integrated. This sees the roller additionally equipped with robust sensors that record all relevant characteristic values such as belt position, belt speed or the condition of the belt splice, making them available for monitoring.

These warnings are observed via a colour display on the device, which shows the belt running situation from green to red. On the other band, the information from the sensors can also be transmitted wirelessly to a monitoring system in which the control data is displayed.