Speaking on the side lines of Sandvik’s Innovation in Mining event in Tampere, Finland, Lewis said the company was making significant headway on a number of hard-rock cutting projects with major industry partners, which was representative of the wider industry appetite for such technology.

“The interest out of the mining community is still very strong,” he said. “We have ongoing discussions with many major mining companies, with hard-rock cutting on all their agendas and roadmaps going forward.”

The sustainability benefits that come with using hard-rock cutting equipment in tandem with conveyors or electric loading machines over more traditional drill and blast and diesel-powered loading and hauling operations is one reason for this interest, but the continuity of operations – no need to stop for blasting, for instance – and safety advantages that come with the technology also hold major industry appeal.

Cutting technology is not new for Sandvik, with the company having a substantial population of borer miners, bolter miners, continuous miners and roadheaders in the soft-rock space as well as many examples of roadheaders in hard rock, which utilise its powerful ICUTROC technology to cut rock exceeding 100 MPa UCS. Its hard-rock portfolio has also included reef miners (more of which later), but one of its most watched hard-rock cutting projects has been the development of the Sandvik MX650.

This machine, which leverages roller disc undercutting technology, has been designed for mine developments in excavations from 4 x 4 m to 5.1 x 7 m. The first iteration of the MX650 has been put through its paces during several test programs over the past few years at WOLFRAM’s Mittersill tungsten mine in Austria, which is owned by Sandvik Group and is a source of tungsten for its tungsten carbide production, used in tooling and inserts for drill bits. According to Lewis, the next version of the MX650 is also now in the works.

This new-generation machine is being developed in collaboration with a consortium of five mining companies under a Canada Mining Innovation Council (CMIC)-led project.

At the same event in Tampere a day earlier, Agnico Eagle Mines Finland’s Development Manager, Jari Nasi, confirmed the gold miner was among this consortium, with the others including mining groups based in both North America and Europe, IM understands. Nasi said: “With the Sandvik MX650, we are evaluating whether this can replace the drill, blast & muck conventional mining sequence. The equipment has significant benefits as it is continuous mining, decreases worker exposure to dangerous locations and better tunnel profile. The current challenge is to prove the viability of the equipment in rock above 150 MPa.”

Lewis expanded on the progress-to-date with the CMIC-led consortium: “We conducted a trial at Mittersill with the companies, which has been concluded successfully. Representatives from the mining companies came to the test mine and evaluated the machine and the mining setup, with a full report produced and shared among the members. We are now in discussion with them on the next steps, which, with all the lessons learnt, would be to design the next version of the MX650.”

CMIC told IM that the demonstration project earlier this year enabled a unique ‘level- setting opportunity’ for all involved, allowing participants to grow the appreciation for the technology and the requirements for mine-ready implementation. “The experience was all enabled through a combination of the industry participants’ drive to adopt hard-rock mechanical cutting and Sandvik’s openness and commitment to cutting technology,” Trevor Kelly, CMIC’s Innovation Manager – Mining, said.

He added: “CMIC is looking forward to this exciting opportunity with Sandvik and our members to collaboratively co-develop the next version of the MX650. This is another step on our transformation journey, which connects directly to the CMIC hard-rock mechanical cutting program and the vision of a continuous underground development platform.”

Some of the ‘lessons learnt’ revolve around both the loading and bolting operations that come with using the MX650.

“We have always been confident we can cut the hard rock, and this has been proven as far back as the MN220 Reef Miner and before that the ARM1100,” Lewis said, referring to these reef hard-rock cutting machines that were designed to operate in 1.15-m-high stopes, delivering low volume ore at the desired grade.

The ARM1100 was developed by Voest Alpine in Zeltweg, Austria, in the early 2000s (Voest Alpine acquired by Tamrock in 1996 then Sandvik taking full control of Tamrock in 1998) together with Lonmin and deployed at its South African platinum operations, but also at KGHM’s Polkowice copper mine in Poland, with the MN220 a result of learnings from these machines. The MN220 has also been previously operated on a trial basis at two Anglo American mines in South Africa.

So why weren’t these earlier machines commercialised at the time? “The cutting wasn’t the problem; it was the rest of the materials handling, logistics, concept operational readiness, etc that needed refining and understanding,” Lewis said.

Cut to today, and the company’s newest narrow reef production system, the Sandvik MN330, is in place at a mine in South Africa, awaiting assembly. This machine has been developed in collaboration with Anglo American, to be deployed at one of its PGM mines. 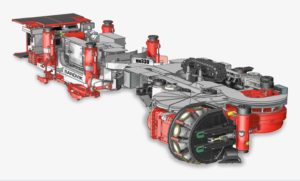 The solution consists of the innovative hard rock cutter, the Sandvik MN330, able to operate in stopes up to 1.5 m high, and a Hencon blower/conveyor system that extracts the cut material from the mine using suction and sends it through a series of separators and filters.

The reef miner will face challenging conditions with one of the requirements being its ability to work in drifts with a slope of up to 30 degrees, reflecting the steep dip of the reefs.

Both cutting operations and “regripping” can be carried out remotely on the MN330, greatly reducing the need for personnel to be in the immediate vicinity of the machine, with only bolting operations requiring manual intervention.

Sandvik has established a control room in the mine’s underground workshop to allow operators to carry out these remote functions, with plans to establish a similar setup above ground as the trial progresses.

Lewis said the trial for this machine, also built in the same facility to the earlier incarnations in Zeltweg, Austria, had multiple phases, including an initial proof of concept that will progress to meeting key performance indicators set by the client.

“Depending on how quickly we move through the different phases, we can accelerate the trial,” Lewis commented. “Anglo American has been a keen supporter right through the organisation of the machine’s development, taking an interest at every level of its development. This machine builds on the experience and learnings of the reef mining projects.”

This machine is unlikely to have applications across multiple sectors in mining, but Lewis said it was another example of the company taking learnings from previous projects, inviting customer feedback and refining the solution for the chosen application.

“You can’t match the whole industry requirements and specifications with one machine – that we understand – but the learning process we continue to go through is paramount to improving our products and ensuring the machines we build continue to improve upon their predecessors and make a positive difference to the mining sector.”