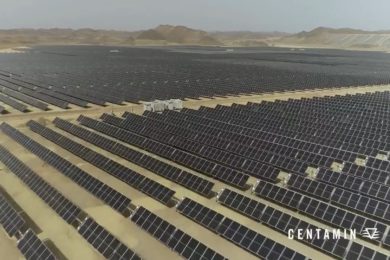 Centamin says the solar plant at its Sukari gold mine, in Egypt, has entered the final stages of commissioning and is delivering savings ahead of expectations.

Furthermore, it says continued progress has been made to assess the opportunity to use Egyptian grid power at Sukari.

The solar plant, which is made up of a 36 MW solar farm and 7.5 MW battery–energy storage system, has been consistently delivering 36 MW DC, converting to 30 MW AC of power, since early September, the company said. This reduction in exposure to volatile fuel pricing with commissioning is saving the company up to 70,000 litres per day of diesel and averaging a reduction in diesel consumption of 22 million litres per year, according to Centamin.

Based on current diesel prices, this means the plant has the potential to provide annual cost savings of $20 million, alongside an expected reduction in Scope 1 greenhouse gas (GHG) emissions of 60,000 t/y CO2 equivalent and a subsequent reduction in volume of diesel trucked to site.

Full commissioning of the solar plant is expected this quarter, the company added.

Centamin previously awarded the engineering, procurement and construction contracts for the 36 MW solar farm and 7.5 MW battery–energy storage system at Sukari to juwi AG and Giza Systems. juwi was contracted to design, supply and integrate the Sukari solar and battery plant into the current diesel power plant, while Giza Systems was contracted to install the Sukari solar plant. To maximise the total energy generation, the project is using bifacial solar photovoltaic modules and single axis tracking. juwi Hybrid IQ microgrid technology will enable the integration of the solar and battery system into the existing off–grid network and support the operation of the existing power station, according to the company.

On top of the solar plant news, Centamin revealed it is actively engaged with government and independent power providers to further reduce its reliance on diesel at Sukari. Its initial proposals to supply 30–50 MW AC of grid power to Sukari have been received and an internal evaluation is underway for potential integration from 2024, it said.

Fifty megawatts of AC grid power supply creates the potential to fully displace the use of diesel for power generation at Sukari, Centamin said. The minimum 30 MW AC of grid power, combined with the existing 30 MW AC of solar power, creates the potential to operate during daylight hours without using any diesel power generation and substantially offsetting diesel consumption during night time hours, it said.

The Egyptian grid power is generated from natural gas and a mix of renewables, such as hydro, solar and wind, creating the opportunity to further reduce Sukari’s GHG emissions. Further, the Egyptian industrial grid tariffs are significantly cheaper than the cost of powergeneration using diesel fuel, Centamin said.

Martin Horgan, CEO of Centamin, said: “Delivery of this critical project is instrumental to our ongoing commitment to reduce our reliance on diesel fuel, minimise greenhouse gas emissions and realising material cost savings. The solar plant and potential to integrate grid power will contribute materially to our environmental stewardship philosophy and our strategic objective of maximising returns for all stakeholders.”