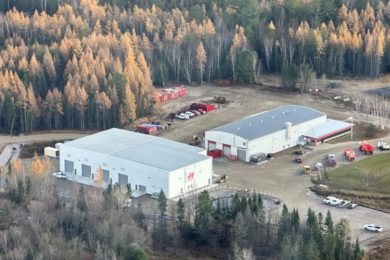 Redpath, on the day it celebrated its 60th anniversary, has inaugurated a new state-of-the-art mobile equipment repair facility at its North Bay facility in Canada.

The new facility represents an C$8.5 million ($6.2 million) investment in the company’s North Bay infrastructure and shows Redpath’s continued confidence that the Ontario city is the ideal location for its global headquarters, it said.

The 15,600 sq.ft (1,449 sq.m) building consists of six repair bays, two inspection bays, along with welding and washing bays. Thanks to the new shop, Redpath will be able to handle the complete life cycle of any piece of equipment from its underground mining fleet in-house, it said.

Redpath said: “It was 60 years ago that Jim Redpath started the company with the commitment to provide superior contracting services to the mining industry. From a mere four employees in the early 1960s, Redpath today employs over 6,000 people in projects all over the world.”