Zinnwald Lithium and Epiroc to collaborate on low-emission mining operation 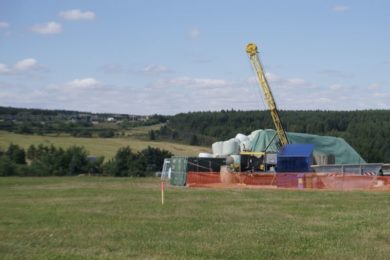 Zinnwald Lithium, the Germany-focused lithium development company, has signed a Memorandum of Understanding (MoU) with Epiroc Rock Drills AB to, it says, collaborate in the development of a state-of-the-art mine at its 100%-owned Zinnwald lithium project.

Under the terms of the non-binding MoU, Zinnwald Lithium and Epiroc will develop plans to implement high-end technology and deliver a low-cost mining operation focused on minimising CO2 emissions, the London-listed company said.

With an approved mining licence, the project is designed to be a long-life underground lithium mine with associated processing facilities, enabling the company to become an important local supplier of battery-grade lithium hydroxide to the European battery sector, it added.

In an interview with IM in September, Zinnwald Lithium CEO, Anton du Plessis, mentioned that electric LHDs could be used to load and haul ore to an ore pass at the mining operation. He said the cost estimates to use such equipment – which are factored into the project’s $336.5 million initial construction capital expenditure bill – had come from Epiroc.

“The base case is battery-operated loaders,” he told IM at the time. “The final selection will be based on an optimisation study where, in particular, partly trolley-fed haulage systems will be investigated.”

du Plessis added in the latest press release on the MoU: “Our vision is to build a world-leading, highly economic mine that adheres to the highest environmental standards; attracting Epiroc as a partner, which shares this ethos and brings with it considerable experience and technology, is a further step towards achieving this goal. By optimising mine design and material flow for electrification and automation, our joint focus is on fossil-free exploration and mining, sustainability and circular economy, including the use of battery-operated underground mining equipment as well as loading and haulage machinery. We look forward to providing updates as our plans advance.”

The Zinnwald project includes an underground mine with a nominal output of approximately 880,000 t/y of ore at an estimated 3,004 ppm Li and 75,000 t/y of barren rock. Processing, including mechanical separation, lithium activation and lithium fabrication, will be carried out at an industrial facility near the village of Bärenstein, near the existing underground mine access and an existing site for tailings deposition with significant remaining capacity.

With a 7-km partly-existing network of underground drives and adits from the ‘Zinnerz Altenberg’ tin mine, which closed in 1991, already mapped out, the bulk of ore haulage is expected to be via either conveyor or rail.