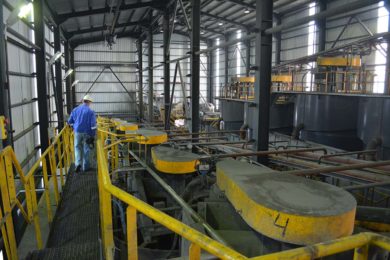 Anglo Asian Mining has started the expansion of its flotation plant at the Gedabek site in Azerbaijan, with the company set to add an additional three rougher/scavenger cells and four cleaner cells from Maelgwyn Mineral Services.

The expansion will see the plant capacity doubled, while providing additional operational flexibility, it said. It also forms part of Anglo Asian’s increase in throughput capacity to process ore from new mines in the short and medium term. This will begin with Zafar, which is due to commence production in the second half of 2023, and will go some way to supporting the company’s ambition to become a mid-tier miner producing over 100,000 oz/y of gold equivalent.

The total cost of the expansion has been estimated at $2.5 million, which will be paid from the company’s existing cash resources.

Reza Vaziri, Chief Executive Officer of Anglo Asian, said: “This expansion is an important step in the company’s preparation for our new mines entering production…This increase in production capacity is a critical part in enabling Anglo Asian to achieve mid-tier production status in due course.”

Anglo Asian’s flotation plant opened in 2015 to produce copper concentrate as the company was mining ore with increasing amounts of copper. The flotation plant is located at its Gedabek site, next to its agitation leaching plant. The plant currently contains six 50 cu.m rougher/scavenger cells and twelve 5 cu.m cleaner cells, a thickener and a filter press. The plant is fed ore crushed by a dedicated SAG mill and ball mill combination.

Maelgwyn Mineral Services will supply an additional three rougher/scavenger cells and four cleaner cells for the expansion. They use Imhoflot pneumatic flotation technology, which requires less energy and offers better recoveries than traditional tank cells and flotation columns, Anglo Asian states. The cost of the new cells including instrumentation and spares is approximately $1 million.

One Imhoflot cell has been under test at Gedabek since April 2022 and has produced excellent results, the company said.

The additional flotation line will increase the flexibility of the plant and enable the production of an intermediate copper concentrate, followed by a final zinc concentrate as a by-product. The crushing circuit of the current agitation leaching plant will be used to provide the additional crushing capacity required for the expanded flotation plant.

Yon İç Ve Dış Ticaret Pazarlama Limited Şirketih (a Turkish contractor) will supply a new thickener and filter press for the new flotation line at a cost of approximately $500,000. The only additional equipment required to complete the installation will be pumps, electrical panels and some minor ancillary items. The building housing the existing flotation line will also require some modification, but no increase in size.