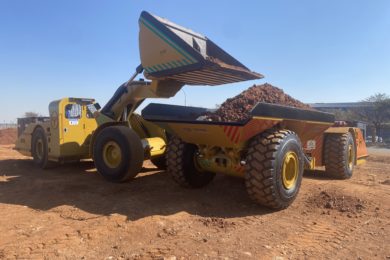 In a rapidly consolidating sector for primary underground load and haul machines, Olifantsfontein, South Africa-based Rham Equipment remains one of the few smaller, innovative and nimble players – which has enabled it to stay at the forefront of development and customisation in areas like battery electric power.

The company had already built South Africa’s first battery loader – the 6 t 20HD – back in 2019, and in 2022 it completed the country’s first battery electric underground truck – the 32 t DT32. It has now also moved on to building flameproof battery loaders for the coal market and has been asked recently to electrify a bolter for coal mine usage. It also offers a battery electric Land Cruiser for both surface and underground markets. One of its battery machines has also recently been retrofitted for autonomous operation which is thought to be a world first – an ultra-low profile 25HDB, which was integrated with RCT’s market-leading ControlMaster® automation technology and is working in a platinum mine.

Managing Director Kevin Reynders emphasised that the battery electric equipment market is also fast-moving and evolving and that its ability to essentially make each machine on a customised basis means it can quickly take advantage of this evolution. “It is important to realise that this market is changing fast due to the evolving battery Watt hour densities. When we started building battery-electric loaders, the batteries were about 60-99 Wh [Watt hours], and now the lithium iron phosphate batteries we are using are 169 Wh/kg, and by early 2023 it is expected that 200 Wh/kg lithium iron phosphate – LiFePO4 – will be available. Automatically that gives us a 69% power increase for the same battery weight. It also means we can install more battery packs in the machine and get better capacity and better shift productive time. And we are very honest with our customers – we tell them this is what we can supply now, but this is what we can potentially supply in a year.” While 200+ Wh nickel manganese cobalt (NMC) batteries are already available, these are not as safe as LiFePO4, as they are not as stable under thermal runaway conditions.

And the way Rham machines are designed makes them relatively easy to retrofit from diesel to battery operation due to their use of hydrostatic drives – another big differentiator in the market. “We have a number of clients that have bought diesel machines from us and have said to us when those units come in for mid-life repairs – they want them retrofitted to battery – and we are able to do this.” In fact the first ever Rham battery 20HD was a retrofit.

Today, Sandvik, Epiroc and Rham all have battery electric equipment in the South African hard rock market – Reynders estimates the number of machines ordered or delivered is now in double figures – this includes the Sandvik LH518B loader at AngloGold Ashanti’s South Deep and Epiroc’s Scooptram ST14 Battery and Minetruck MT42 Battery set for Black Rock. Rham has ten battery machines running – 7 t (25HDB), 7.5 t 30HDBF (flameproof unit) and 10 t (30HDX) battery LHDs plus the mentioned DT32 (32 t payload) underground battery truck – with more units under construction. These are all in or going to platinum, gold and chrome mining operations and replacing diesel machines. Plus it has begun to also deliver its Electric Cruisers. 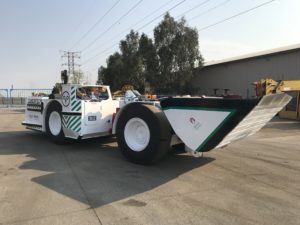 The battery used in the coal market to date has been older design lead acid machines used on some loaders and shuttle cars. However, Rham’s flameproof LHD is the first in coal with a LiFePO4 battery. Three flameproof Rham LHDs – known as the 30HDBF – have been built, which the coal mining client is now testing. The loaders can carry 7-8 t depending on the material density.

Reynders told IM: “The potential market in coal is massive. Diesel LHDs dominate the South African market today in coal. But the miners want to eliminate the underground heat and diesel particulate matter emissions. We are also looking at applying our LiFePO4 battery solution to the shuttle cars so they can lose the restriction of having a cable. In addition, we are considering converting two locos to lithium battery operation in a platinum mine.”

Reynders also says that the South African market is becoming much more mature. While some still want to wait until others test and trial battery machines, on the whole the majority want to start using the machines as soon as they are available, so demand for that is very high. He believes that as testing ramps up in 2023, by 2024 the demand for new battery machines in South Africa will start to ramp up very quickly and customers that have trialled one or two machines will look to wholesale fleet replacement.

So how would Rham summarise its unique market advantage? “First and foremost we are small, so it is easy for us to make decisions. And that is part of the reason customers come to us. The big OEMs can’t change things quickly in the same way that we can. If the customer wants to try a particular configuration or retrofit, we will work with them to do it where others will not. All of our frames and a lot of our components including are made locally which has also shielded us from some of the supply issues affecting other OEMs. We offer a much faster turnaround time, plus our machines are more cost competitive.” 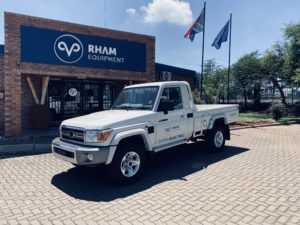 Recently Rham has also built up an export market in India, working with a dealer there and selling diesel loaders, trucks and bolters for underground room and pillar operations there. Plus its machines are known for performance – a Rham bolter recently set a per shift section bolting record in South Africa with 374 bolts.

Rham is additionally active in bringing battery electric light vehicle options to the southern African market. In 2021 it began a partnership with Germany’s Huber Automotive AG which led to the introduction of the Electric Cruiser – which in Africa is now based on Rham carrying out conversions of the Toyota Land Cruiser 70 series using Huber’s well proven Li-ion battery electric powertrain. After a roadshow around the country with the first unit, it was sold for surface use and a further unit has now also been sold for underground use. Two more are also on order which will bring the total to four. There is also a customer looking to convert a number of its Land Cruisers to battery with Rham.