Kal Tire’s Mining Tire Group is helping the industry learn about the many possibilities of its thermal conversion recycling technology. How can mines best prepare for a new way of handling end-of-life tyres?

Mining companies around the world are being called to demonstrate environmental stewardship in every way, including how they handle end-of-life mining tyres. It’s a time Kal Tire was anticipating several years ago as it began to imagine a new way to recycle ultra-class tyres that would lead to the best and highest use of a recycled rubber product.

It’s the only operating facility of its kind that Kal Tire is aware of and, now that it’s been operating successfully for nearly a year, the company is ready to bring its technology to other regions it serves and the many thousands of end-of-life mining tyres waiting in scrap piles.

How did Kal Tire develop this unique solution at the top of the recycling hierarchy? At a time when mining companies are pursuing ESG and sustainability solutions with greater attention than ever, why is thermal conversion a much-discussed option? And, what can mines determined to reduce their carbon footprint learn about paving the way for bold solutions? 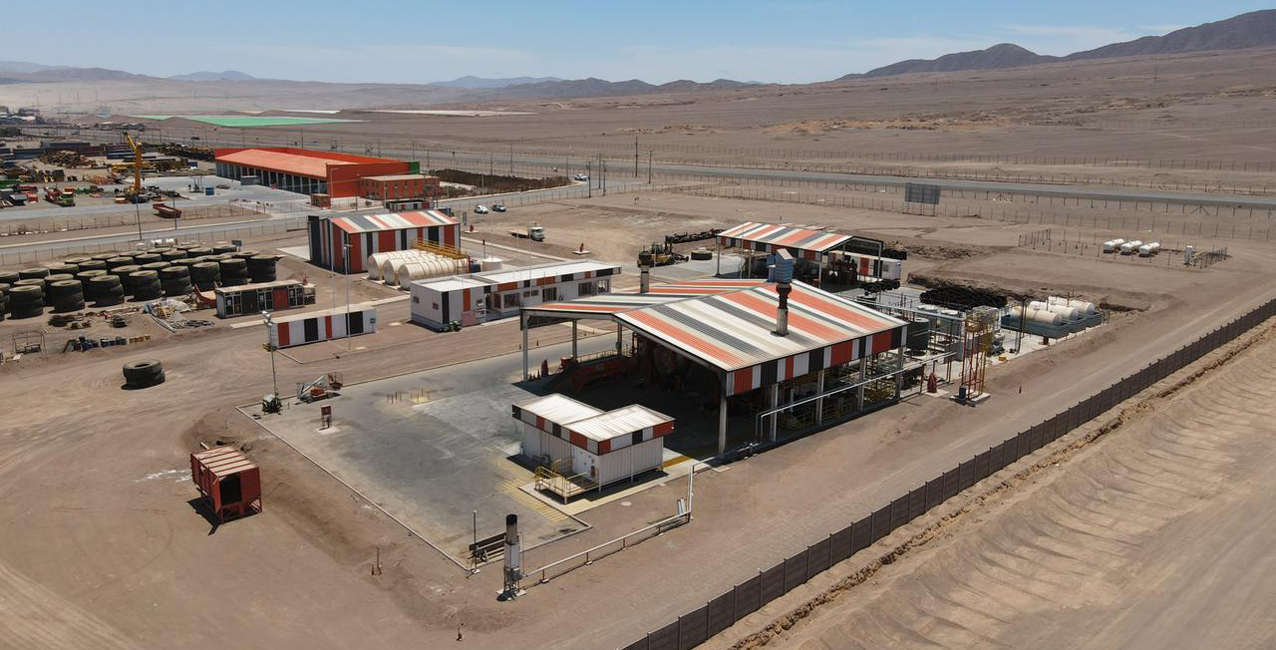 Until recently, Chile was like most mining countries in that it was without a viable option for its stockpiles of scrap tyres. Chile is home to six of the 10 largest copper mines in the world and nearly 500,000 t of scrap tyres. Recognising the need for a solution was great, several years ago, Chile became one of the first countries to develop mining tyre disposal legislation.

At the same time, Kal Tire began to consider its role in providing a solution to customers at every stage in the life of a mining tyre, and the company could see the demand for a sustainable solution on the horizon. A project team was tasked with exploring not just a practical way to recycle ultra-class tyres (tyres can weigh 4 t and many mines are far from major centres) but also the most sustainable way to recycle tyres – an option that could do more for mines and communities than traditional shredding. While shredding gives a second life to recycled rubber crumb as garden mulch, asphalt aggregate and playground surfaces, that recycled rubber product will eventually end up at the landfill. The phrase ‘circular economy’ was less common then, and it was one the project team aspired to achieve.

Kal Tire has been serving customers in Chile for decades, and so the legislation discussions became the impetus for Kal Tire to develop a mining tyre recycling solution that would first be implemented in northern Chile. 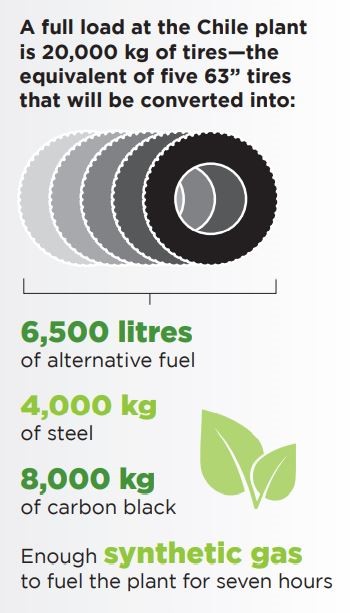 Significant research led the project team to thermal conversion recycling. It’s a unique process that uses heat and friction to induce a reaction that converts tyres to their base elements. After the tyres are cut into smaller pieces, they’re heated in a vacuum with no oxygen. That also means there’s no combustion and no smoke – a very clean, environmentally friendly process. After about five hours in the reactor, the process emits a gas that fuels the entire process. The external fuel is turned off and the tyres themselves give the energy for the process to continue.

When the process has completed, what’s left is carbon black, alternative fuel and steel – the original components used to manufacture a tyre, and virtually 100% of the tyre can be reused as high value chemical feedstock. Carbon black can be reused in batteries, plastics, pigments and paints. High quality tensile steel can be recycled in numerous ways. Oil can fuel generators, or it can be refined into alternative fuel for reuse in mine site equipment – creating that circular economy and a greater impact.

Back in 2015, however, the technology didn’t exist to support the recycling of mining tyres. If Kal Tire wanted to pursue thermal conversion, it would have to develop the technology.

What followed was the arduous process of making thermal conversion a viable and effective solution for ultra-class tyres and building the 20,000 sq.m facility in the heart of Chile’s mining region. During that process, Kal Tire was also participating in dozens of conversations with customers and the Chilean government to ensure the plant would meet the needs of government and industry and exceed environmental and safety requirements.

Throughout, Kal Tire commended the leadership of the government and the involvement of the mining industry, keen to operate in a way that’s more environmentally responsible.

A few years later, as the facility’s wet testing approached, one of Kal Tire’s longstanding Chilean customers invested in having 2,300 t of its scrap tyres recycled. In the spring of 2021, the first reactor’s full load tests were successful and, later that year, the facility reached the end of commissioning. The progress followed a groundswell of interest in the mining industry to support a circular economy and ESG, but how would the output quality compare to expectations, and how could Kal Tire share these learnings to help other regions take action?

As Kal Tire begins to recycle some of the thousands of scrap tyres in Chile, the potential opportunities for reuse of the materials are growing, as is the appetite for an approach that creates this kind of circular economy.

Over the last year, the facility has seen consistently high-quality outputs and, with that, more opportunities for them to become high value chemical feedstocks or fuels. For example, the project team imagines a future where the carbon output could be reused in conveyor belts on mine sites (and the belts could be recycled time and again), or in the manufacture of plastic piping that transports water on mine sites. Mines have the potential to use a tyre once for its intended purpose, and then reuse a portion of a tyre’s original material in a form such as fuels. This is the chance to have an even greater impact for customers and communities that Kal Tire sought to achieve.

The technology is effective. The outputs are of high quality. The circularity is proven and exciting. What now? How can this solution be used in other countries?

Leaders at Kal Tire say developing an innovation such as this requires strong collaboration between several partners – suppliers, customers, manufacturers and government. Each stakeholder has different but important interests and roles in the supply chain. For instance, the mines want to dispose of their tyres, or, as in Chile, they’re compelled to, and government is involved in that. Customers for the carbon, alternative oil and steel will all have different and vital interests for the offtake markets. Manufacturers, who are considering more environmentally friendly ingredients and processes, must adhere to extended producer responsibility (EPR) legislation and are now also looking at this recycled, recovered and more sustainable material to support their ESG commitments.

Pursuing new ways of handling end-of-life mining tyres also requires a future mindset, investment and planning. Being thoughtful about reclamation early on, means mines will have a much better chance of resolving the challenge of stockpiles in a way that’s best for stakeholders. 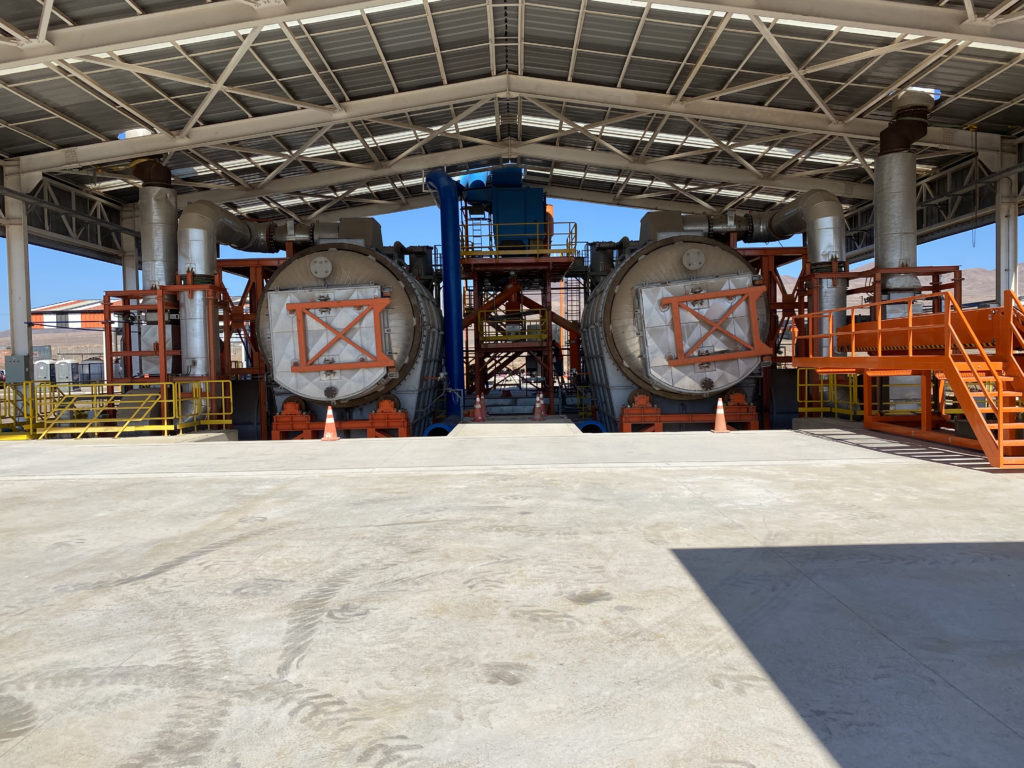