Gold Fields’ Agnew mine in Western Australia is continuing to innovate, with its latest technology development involving the installation of a new modular Sandvik Rock Processing Solutions crushing system that can align with its day-time solar generation capabilities on site.

The operation has recently completed one of the biggest hybrid renewable projects in the mining sector – one that includes solar, wind, battery storage and a backup gas turbine (the Agnew Hybrid Renewable Power Station). This project has put the mine on track to source some 60% of its overall energy needs from renewables.

At the same time as this, Agnew is also testing out battery-electric equipment to further decarbonise its operations, which consist of two underground mines (Waroonga and New Holland) amalgamated into the Agnew One Mine Complex.

The innovative integrated thinking has gone further than this, with a planned plant throughput increase looking to leverage as much renewable energy as possible.

In this latest project, the mine has invested A$35 million ($25 million) in the construction of a new modular crusher. The latest milestone has seen all the concrete in the construction of the project poured, with the southern run-of-mine (ROM) access ramp completed and the final stage of backfilling of the ROM wall having commenced.

The construction team are 60% of the way through erecting the crusher structure and all key crusher components – crushers, screens, feeders, magnets and metal detectors – are on site.

IM put some questions to the Agnew Technical Team to find out more about this project.

IM: Are you able to share what type of crusher the new installation is? Could you also mention what crusher model it is replacing?

ATT: We opted for a Sandvik solution (modular plant solution and automation-ready). There were several reasons for going with Sandvik and deciding on a modular-style plant. This choice has now proven beneficial two years down the track with the challenges we have seen obtaining steel and fabrication services around the globe during COVID. We began early design work with Sandvik back in June 2020, however, we also worked through various other design and equipment options with other key crushing and screening suppliers on the market.

Gold Fields were involved in the design of the circuit as the configuration needed to accommodate for potential production increases in the future, whilst also efficiently crushing the current throughput rates.

The Gold Fields project team managed the electrical design through a third-party electrical engineering company. The automation and control philosophy has been undertaken in-house by the Gold Fields Process Control team. This has been a good opportunity to demonstrate the skills and knowledge we are now building in that space. The project has been executed by the Agnew project team with an external engineering firm.

We are installing a CJ412 primary jaw crusher, two 840i cone crushers (secondary and tertiary), a double-deck product screen and several bits of auxiliary equipment such as magnets, weightometers and a rock breaker above the jaw crusher. The process design criteria was 1.7 Mt per annum with a P80 of 6 mm. The circuit replaces a JW42 jaw crusher, three 1350Z cone crushers (one secondary and two tertiaries) and two product screens. 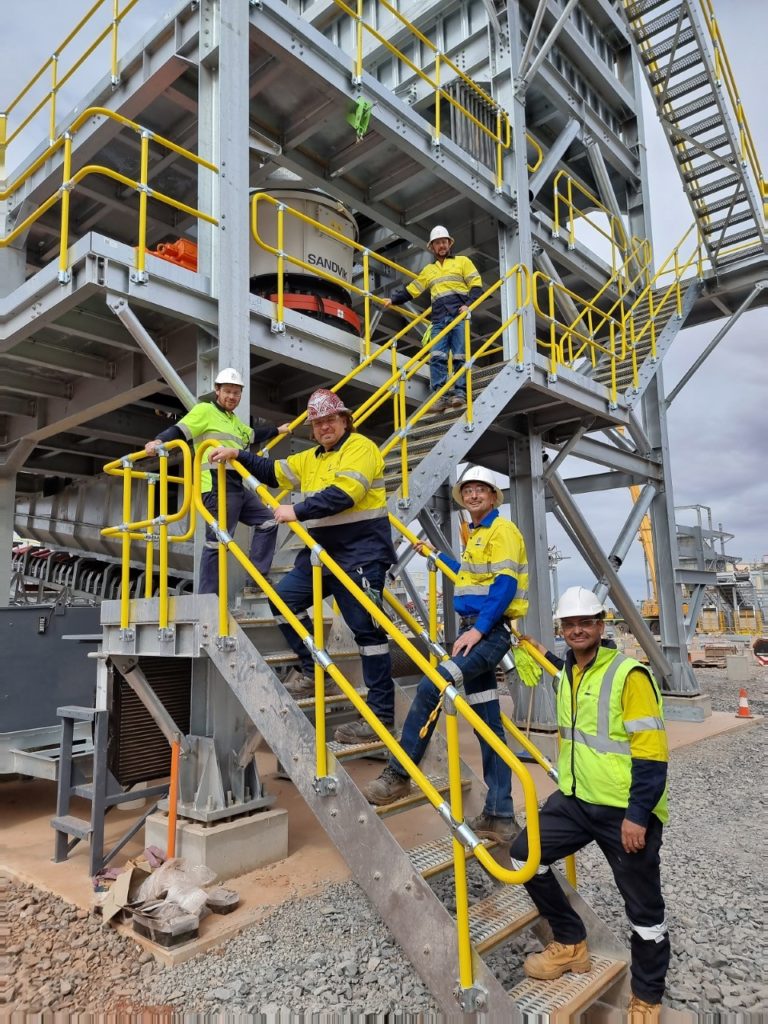 ATT: The new circuit will be simpler and more efficient to operate with less equipment, as well as being more modern. There are less transfer points and wear areas, which will reduce the maintenance costs associated with running the current crushing circuit.

In addition, the design and automation of the new circuit will mean the crusher is operated remotely from the main control room, removing the need for a second process operator to be situated in a standalone control room. The three Sandvik crushers have a larger capacity and slightly higher power draw, but they will produce a finer product size more efficiently based on being the latest technology on the market. This will have a positive impact upstream in the processing plant once the ore reaches the grinding circuit.

The design has included the ability to monitor the power draw of each section of the circuit, which will be fed from the Agnew Hybrid Renewable Power Station. Having the ability to crush at a higher throughput rate will also mean being able to operate the crusher more during daylight hours by taking advantage of the solar-generated power. Last year, 56% of the power Agnew draw came from renewables.

IM: When does the team plan to have the new crusher in place and commissioned?

ATT: Commissioning is scheduled for mid-August.