Immersive Technologies is to deliver its 100th Conversion Kit® for Caterpillar® equipment owners within the continent of Africa, with the milestone high-fidelity operator training simulator set for the Newmont-majority owned Ahafo gold mine, in Ghana.

The order includes simulation for training operators of the 777G and 785C haul trucks, D11T dozers, and 6030 shovels and excavators. These units mark the 98th, 99th, 100th and 101st conversion kits that Immersive Technologies has delivered to further workforce development initiatives in the Africa region for mines who require high-fidelity simulation solutions for their Caterpillar equipment, it said.

Johan Stemmet, Regional Vice President Africa, said: “We are excited to provide a high level of value and service to Newmont for this important mining project by supporting community skills development and increasing operator safety and productivity levels. We continue to put the customer first and deliver industry-endorsed solutions for all OEM makes as evidenced by our leading market share across the largest global miners.”

Gold Fields plans to test the use of LNG to power haul trucks in a trial at its Tarkwa open-pit gold mine in Ghana, CEO Nick Holland told attendees of the IMARC Online event this week.

Speaking on a panel reviewing progress of the Innovation for Cleaner, Safer Vehicles (ICSV) initiative – a supply chain collaboration between the International Council on Mining and Metals (ICMM) and original equipment manufacturers (OEMs) – Holland said the trial would involve a mix of LNG and diesel fuel at the operation, and four trucks would initially be tested with the fuel combination in 2021.

Gold Fields later confirmed to IM that the trial would take place in the second half of 2021 and involve the use of Caterpillar’s dual-fuel LNG Dynamic Gas Blending (DGB) retrofit system on four of the mine’s Cat 785C 146 t payload dump trucks.

DGB vaporises liquid fuel into natural gas, then replaces diesel fuel with LNG when possible. On average, DGB replaces about 60-65% of diesel with LNG, according to Cat.

While this trial will potentially lower the company’s carbon emissions – as will Gold Fields’ plan to fit “diesel filters” on all its machines underground in the next 12-18 months – Holland pointed to a much loftier long-term goal during the ICSV panel.

“The challenge to our teams and OEMs is to move away from diesel completely,” he said.

Such a move could see the company employ both battery-powered and hydrogen-powered solutions at its underground mines, he added.

Caterpillar has been showing one of Mexico’s biggest gold mining operations that its Dynamic Gas Blending™ (DGB) technology can provide savings on fuel costs and emissions while maintaining the same performance, payload and productivity of its diesel haul trucks.

The mining OEM and its Mexico-based dealer, Matco Cat, have been working with Fresnillo’s Penmont division to convert its entire fleet of large mining trucks at the La Herradura open-pit mine, in Sonora.

Caterpillar’s dual-fuel DGB technology, which has accumulated 10 million hours in the oil and gas industry since 2013, works by blending lower cost liquefied natural gas (LNG) with diesel fuel, according to Cat. 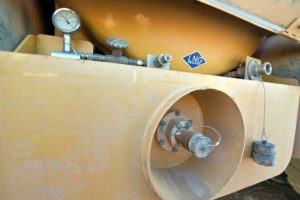 The resultant improvements in fuel, emissions and maintenance can add up to millions of dollars each year in cost savings, Cat said.

La Herradura, since 2016, has acted as a great case study for the technology given it has more than 250 Cat trucks and the operation hauls at least 25 Mt of volume per quarter (based on Fresnillo’s most recent Q4 production results).

In addition, the company has been looking for ways to “produce (gold) in a sustainable manner”, Fresnillo’s Abel Villa said in a recent Cat customer story.

According to Steve Igoe, Commercial Manager for Caterpillar’s Gas Engine Business, the benefits of DGB technology include, primarily, a lower cost per tonne, realised through a lower fuel cost. “DGB truck operation with LNG has proven very beneficial to La Herradura, and this is why they have decided to convert their entire fleet,” he said.

“Typically, LNG is 30% lower than the price of diesel. And, on a typical fleet at a mine, that adds up to millions of dollars a year,” he said. “And the trucks maintain the ability to operate 100% on diesel.”

Cat estimates a fleet of 100 trucks spends approximately $60-70 million/y on diesel fuel. With 65% displacement to LNG using DGB, that fleet could save $13 million/y on fuel alone.

DGB can also bring about a 30% cut in emissions compared with diesel-only operation – another important saving for mining companies looking at sustainability. 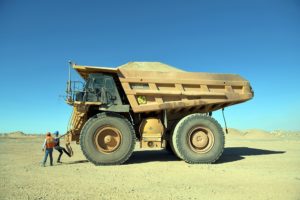 Trials during 2016 and 2017 of the technology at a gold mine in Turkey and a phosphate mine in the US have proven these claims.

For instance, the Turkey gold mine has retrofitted DGB technology on Cat 150-ton (136-t) 785C haul trucks and, since installation, has reached an average 70% average fuel displacement in addition to an operating cost reduction of $30/h.

Fresnillo’s Villa said La Herradura had gone further than this in terms of displacement.

Villa continued: “We have an average reduction of 70% in diesel consumption. We also considerably reduced the amount of emissions. When we compare both diesel and gas, the operation is the same.”

Cat said it observed a less than 1% difference in speed, payload and gear shifting, plus a 30% reduction in fuel cost, during one customer’s 5,000-h DGB trial.

La Herradura has also seen no unexpected maintenance issues during the trials, according to Fresnillo’s Enrique Leal. This is in keeping with Cat’s focus on reliability and productivity, with the company saying it has tallied zero hours of unplanned downtime.

Fresnillo’s Villa said the operation also plans to partner with a third party to build an LNG plant near the mine to ensure a sustainable supply.