Cat autonomous trucks are on pace to eclipse previous record totals of materials hauled in a calendar year, projected to be more than 1.4 billion tonnes (1.57 billion tons) in 2022.

Denise Johnson, Group President of Caterpillar Resource Industries, said: “In 2013, we placed our first fleets of autonomous trucks in Western Australia at FMG Solomon and BHP Jimblebar. Since that time, trucks using Command for hauling have safely travelled nearly 200 million km, more than twice the experience in autonomous operations of any automobile manufacturer. Caterpillar has grown the number of autonomous trucks in operation by 40% in the past two years.

“We believe that automation is one of many keys to implement technology that unlocks the value miners need when it comes to the energy transition toward more sustainable operations.”

One of the company’s recent contract wins on the automation front relates to BHP’s majority-owned Escondida mine, in Chile.

Marc Cameron, Vice President of Caterpillar Resource Industries, said of this agreement: “The new Cat 798 AC electric drive trucks replacing BHP’s entire haul truck fleet at the Escondida mine will feature technologies that advance the site’s key initiatives, including autonomy and decarbonisation. The agreement allows Escondida…to accelerate the implementation of its autonomy plans by transitioning the fleet with autonomous haulage system (AHS) technology.”

Since 2019, Caterpillar says it has won eight of nine greenfield autonomy sites on offer.

Sean McGinnis, Vice President and General Manager for Cat Mining, said: “In 2023, we will expand Command for hauling to the 139-t truck class at ioneer Ltd’s Rhyolite Ridge lithium-boron mine. This is the first greenfield project in North America to use an AHS. We are now seeing a shift toward autonomy requested on new Cat trucks. Whereas large mines with fleet sizes of more than 70 trucks were the early adopters of the technology, we are seeing economic viability for autonomy at smaller mines with a fleet of less than 15 trucks.”

Caterpillar says it continuously monitors the industry for opportunities to broaden the use of automation to help drive safety and efficiency.

Beyond expansion of Command for hauling to the Cat 785 for ioneer, Caterpillar sees potential for Cat autonomy in quarry and aggregates. Additionally, Caterpillar’s AHS technology has been deployed on the Cat 789D autonomous water truck (AWT) operating at Rio Tinto’s Gudai-Darri mine in Australia, the world’s first AWT, for automated watering of haul roads.

Caterpillar and its southern Africa dealer, Barloworld Equipment, are set to present a broad range of machines, technology and support services at next week’s Mining Indaba, in Cape Town, South Africa.

Caterpillar has recently introduced several new underground hard-rock mining vehicles in Africa. The new R1700 underground LHD brings the latest technology for semi-autonomous and fully autonomous operation to the region. The loader also delivers more than 30% greater fuel efficiency, 65% more lift and tilt force, and 15 t capacity – 20% more than its predecessor, yet in the same dimensional envelope, according to Cat.

Using MineStar Command for underground, the new R1700 (pictured) can be operated from a remote location to keep miners away from potential hazards, Cat says. “The system also boosts utilisation by allowing immediate entry after blasting and by reducing shift change time to nearly zero.”

In addition to the R1700, Caterpillar has introduced several LHDs and underground trucks equipped with EU Stage V engines and emission controls. “Reducing emissions helps miners improve the underground working environment,” it said. On top of this, and with the goal of zero underground emissions in mind, Caterpillar is continuing to develop the battery-powered R1700 XE.

Erik Elsmark, Region Manager for the Caterpillar Underground Mining Division, said: “Caterpillar and Cat dealers are supporting the whole African continent and all types of underground mining applications – big and small mines and all minerals.

“In the past several months we have delivered machines covering our full product range, demonstrating that we are well positioned to meet our customers’ needs.

“Starting with our AD22 underground articulated truck to our R2900 LHD, our equipment delivers exactly the size class and power needed for the application. With distribution centres in Southern Africa and Middle East and our dealer network in all countries of the African continent, we are able to achieve world-class service.”

The extensive line of Cat surface mining machines and technologies will also be a talking point at the event.

Caterpillar has recently expanded its line of electric drive mining trucks in the past year to include the 794 AC, 796 AC and 798 AC. Recently, a South Africa mining operation took delivery of several 794 AC trucks (pictured above), which have 291 t capacity, the company said. “This model has already proven its high productivity and superior speed on grade in a wide variety of applications,” Cat remarked.

In the Cat drill line, the latest model is the MD6200 rotary blasthole drill, designed as a production drill with the flexibility to do pre-split drilling – all in a package that Caterpillar says is its most transportable rotary drill yet. The MD6200 is designed to perform rotary or DTH drilling in single-pass or multi-pass modes and can drill holes of 127 to 200 mm in diameter, according to Cat.

Mine power experts will also be on call at the show, with the representatives keen to talk about the ability for Cat generators to deliver reliable, continuous power, temporary power, or a combined heat and power solution. “The Cat team customises and installs systems for every phase of mining,” it said. 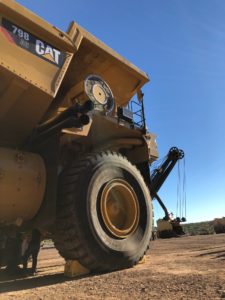