The use of an all-terrain unmanned ground vehicle, incorporation of military spec hardware and sensors, a bank of lead/acid batteries, and the ingenuity of three mechatronics graduates have brought Newcrest Mining closer to its goal of automating the PC1 extraction level at its Cadia East gold-copper underground mine in New South Wales, Australia.

The company has progressively been rolling out automation-focused technologies at this mine steered by its Mining Innovation and Automation (MIA) Team.

Last year, this team, with the help of Epiroc, successfully implemented the first semi-autonomous integrated production level at the mine, with, at the time, an autonomous Scooptram ST18 capable of full 24/7 production across seven drives of a whole panel cave at the operation.

It is a slightly smaller machine that is helping the company progress from the automation of production and support equipment at the mine to autonomously completing a range of inspection tasks on the fully-autonomous PC1 extraction level.

The seeds for the SmartHog vehicle – a WartHog all-terrain unmanned ground vehicle with ‘smarts’ – were sewn back in early 2021, when Cadia’s first mechatronics graduate arrived to join the MIA team.

“A challenge was set to build an automated underground inspection robot utilising a WartHog chassis,” Aaron Brannigan, Cadia General Manager, told IM, explaining that the challenge provided a hands-on task for the graduate that would result in a solution that was beneficial in realising the team’s key focus of improving safety through technology and innovation.

The new graduate began to design this robot with the WartHog chassis as the base and, over time, was joined by two more mechatronics graduates – one with a dual computer science degree – where the conceptual work behind the robot really started to accelerate.

In early 2022, the three started to build the robot from a range of hardware, all based on military specifications to withstand the underground environment.

Brannigan explained: “To achieve this, the graduates made every cable themselves, crimped every connector, assembled all the components and sensors and wrote the software code for various aspects of the sensor outputs.” 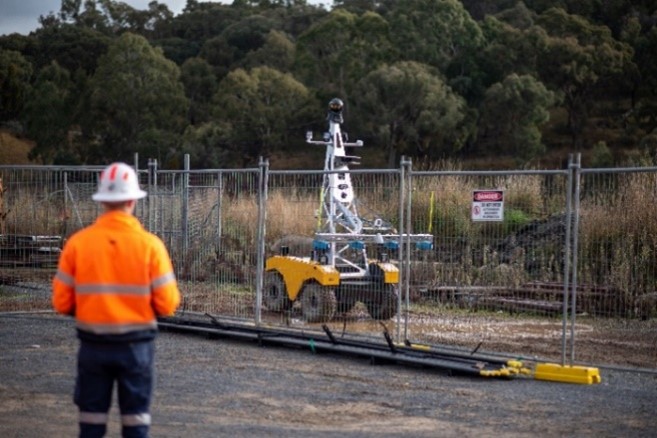 Since the inspection robot was designed to replicate tasks typically performed by people on the level, it had to be fitted with a range of sensors including LiDAR, Radar, a PTZ camera, stereoscopic camera, LED spotlights and a weather station for wet bulb temperatures and measuring wind velocity for ventilation purposes, the company explained. Powered by a bank of lead/acid batteries, the SmartHog was commissioned on surface and, in June 2022, completed trials underground, including being ‘checked in’ to the autonomous system.

“With some further testing and improvements, the SmartHog will soon live permanently underground in the autonomous zone and will be able to complete a range of inspection tasks,” Brannigan said. “This moves us closer to our goal of automation at the extraction level and is a key focus of improving operational safety and sustainability through technology.”

IM put some questions to Brannigan to find out more.

IM: How are you leveraging technology from the automotive sector in the SmartHog? What kind of adaptations are required for this to work underground?

AB: The SmartHog utilises automotive industry radars as a way of localising its position underground. LiDAR is vulnerable to interference from dust and moisture in the air, whereas radar can ‘see’ through these, allowing the SmartHog to continue to navigate and know its position underground when these are present. We believe the use of radar in this context is industry-leading and our intent with this is twofold: first, it demonstrates the advantages and reduced downtime of radar over LiDAR and, second, it encourages original equipment manufacturers (OEMs) to move from LiDAR to radar for their autonomous equipment so they can take advantage of the benefits it offers.

IM: What existing underground communications infrastructure is in place at PC1 to help facilitate the real-time transmission of data from the SmartHog?

AB: Our underground PC1 level has Wi-Fi throughout which forms the basis of the autonomous system, and this is connected to the surface via fibre optic cables.

IM: How are you using the new data you are collecting with the SmartHog at Cadia? What tasks is it allowing you to do that you couldn’t previously carry out (or conducted differently)?

AB: The primary purpose of the SmartHog is to undertake a range of tasks that a person has usually performed in the past, improving both safety and efficiency. One example is geotechnical inspections of draw points and extraction drives. In the past when it was necessary for a Geotechnical Technician to undertake an inspection, the autonomous level would need to be deactivated and the autonomous equipment removed to ensure there was no risk of vehicle on person interaction. This is a time-consuming process and means production is stopped for the duration, not to mention the potential risk to the person entering the level on foot.

With the various sensors fitted to the SmartHog, it can scan and photograph the draw point (using the conventional digital camera and stereoscopic camera) and send this information to the surface where a Geotechnical Engineer can review it, all while autonomous loading operations continue.

As the SmartHog is ‘checked in’ to the autonomous system and is ‘seen’ by the other equipment, it can operate independently but also become part of the autonomous traffic management system. Should the Geotechnical Engineer require further information about the draw point, the SmartHog can return and drive up to the limit of the draw point and capture further data from the range of sensors.

IM: Are there other projects outside of the PC1 where you could use the SmartHog?

AB: We anticipate in the future that each panel cave could have their own SmartHog, so that a range of tasks can be completed as previously outlined.

IM: Are there plans to make more SmartHogs? Could they be adapted to carry out other tasks?

AB: The way we have developed the first SmartHog may look very different to how any future SmartHogs may look. The value the graduates gained from solving a current problem using a hands-on approach is priceless and helps demonstrate the value of the graduate program. We believe the graduate program at Newcrest is industry-leading given the types of challenges our graduates can address and solve using the skills recently acquired at university on real-world challenges.

Given the SmartHog is battery powered, as battery technology improves, the next generation of SmartHogs will be able to carry lighter and higher capacity batteries allowing for larger payloads and longer run times. This could allow the inclusion of other sensors and different types of cameras, such as infrared and thermal, which are traditionally heavy items and would limit the range of the current battery performance. The options available are endless once battery technology improves to the point where runtimes are increased and recharge times are reduced. This is not far off given the speed at which battery technology and design is improving.

In 2018, Cadia commenced a loader (LHD) automation trial with Epiroc, with the aim of removing operators from the Cadia East underground environment, while maintaining productivity and performance. The loader trial proved successful and the next phase involved integrating non-Epiroc machinery into the existing automation fleet, Epiroc said.

Cadia’s Mining Innovation & Automation team worked with Epiroc and MacLean to integrate a MacLean water cannon capable of localisation with Epiroc’s traffic management system and safety hardware, so that it could be introduced into the automation safety system.

By integrating the MacLean IQ Series tele-operation system with Cadia’s automation safety system, the water cannon could be safely operated from the surface in a tele-remote capacity, allowing it to work alongside Cadia’s semi-automated loaders, Epiroc said.

The water cannon was trialled and commissioned during July and August and is now in use at Cadia East, according to Epiroc.

Cadia General Manager, Aaron Brannigan, said that integrating the water cannon into Cadia’s automation system has improved the efficiency of the production level and removed human exposure from drawpoints.

“We are constantly pushing the envelope of change in the innovation and technology space,” Brannigan said. “Automated machinery allows for shift in technical capabilities of our workforce, while ensuring we continue to eliminate safety risks from our operation.”

The success of this milestone paves the way for further integration of other key pieces of secondary break equipment into the automation system, according to Epiroc, which added: “This project is part of Newcrest’s ongoing drive to increase its automation and innovation focus on site.”