Epiroc has taken another significant step forward in its rock reinforcement automation journey with the release of the Boltec Auto Bolt Reload (ABR).

Combining the company’s ground support nous with its mechanisation and automation knowledge has resulted in a solution able to remove operators from the front end of the bolter – where personnel are most at risk of rock falls from unsupported ground – and increase bolting productivity, especially in poor ground conditions.

Epiroc claims the Boltec ABR is the first ever underground rock reinforcement drill rig designed in such a way that the bolt type and machine work together in synergy to deliver optimal safety, performance and quality. The machine can also be equipped with a mesh delivery system.

This synergy also leads to improved accuracy in bolt installations and a reduced need for re-bolting, according to Peter Bray, Global Product Manager, Rock Reinforcement at Epiroc’s Underground division.

“By using a Boltec ABR, you are better able to install bolts and mesh correctly with high quality, reducing the need for re-bolting, re-meshing…and rehab work in the future,” he told attendees of a webinar announcing the product launch today.

The mechanisation of the bolting process – in tandem with the use of self-drilling anchors (SDAs) and pumpable resin – should provide operations with the comfort to follow recommended bolting patterns, reducing the need for the installation of additional bolts that go above and beyond optimal industry practice.

The main design feature of the Boltec ABR is the fully mechanised bolt reloading system. The system automatically feeds bolts from a large carrier magazine – able to hold 44 bolts in 2.4-m or 3-m lengths – to the feed magazine – able to hold eight bolts – all while the operator remains safe inside the cabin. This innovation removes the need for manually reloading the feed magazine, thereby reducing the associated risk to the operator.

The fast auto reloading sequence speeds up the production cycle, with a total of 52 bolts able to be installed in a heading before manual reloading of the carrier magazine. The carrier magazine is mounted on a swing arm that lowers the magazine to ground level for easy reloading behind the machine’s front support jacks – where ground support should already be in place.

Productivity can be further boosted with the operator carrying out the reloading process when bolting is being carried out in multi-bolt auto mode, according to Bray. 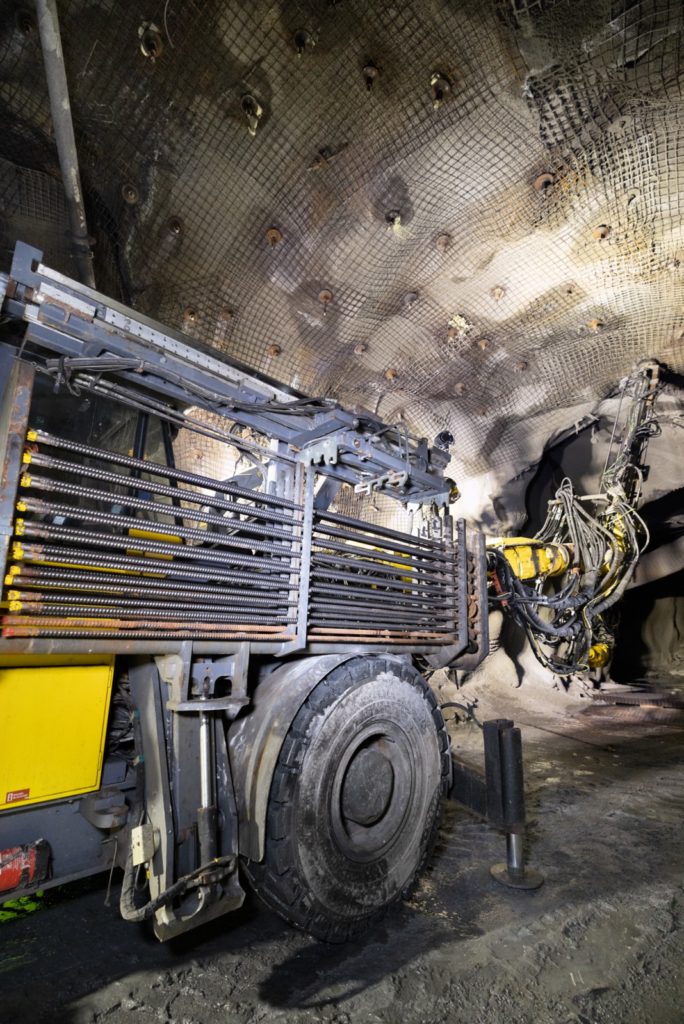 The Boltec ABR opens the door to other safety and productivity-enhancing autonomous functionalities previously not compatible with underground bolting machines, according to Epiroc. Tele-remote control and the aforementioned multi-bolt auto are now available options that can provide bolting potential during shift changes or when conditions preclude having an operator physically on the machine. The machine is also available with a battery-electric driveline.

Bray said the development and integration of SDAs and pumpable resin on conventional Boltec machines have been integral to achieving this new functionality.

“If you think about our face drills and long hole production rigs, they have had automation for many years,” he said. “There hasn’t been a mechanical reason why we couldn’t automate a bolting machine; the stopping point has been the type of legacy rock bolts used.”

SDA bolts, which, according to Epiroc, offer faster bolting times and higher quality installation, are not sensitive to varying conditions and will achieve consistently fast installation. This provides easier scheduling accuracy for mine planning and forecasting.

The pumpable resin, developed to address inconsistent and unreliable bolt installations as mines go deeper and rocks become less competent under added pressure, offers fast setting times and full bolt encapsulation, ensuring speed and quality of installation, the OEM says. An added plus is the resin’s insensitivity to wet ground conditions, which can be a desirable characteristic for many deep underground operations.

“Given that it is much cleaner and easier to use than traditional cement, the pumpable resin reduces hours spent on cleaning the machine,” Bray said. “Hence, it is increasing productivity by providing more bolting time.”

Like other Boltecs in the range, the Boltec ABR comes with a boom-mounted bolting system, providing flexibility in terms of coverage and bolt installation angles, according to Bray.

“It’s very rare that you have perfect straight drive profiles in underground mining,” he said. “The boom-mounted bolting system offers the flexibility to address this.”

LKAB, along with the European Institute of Innovation & Technology, have been key partners in the development of this machine, with the prototype tested out at both the Kiruna and Malmberget mines in northern Sweden.

Kiruna suffered a significant seismic event during May 2020 where several areas underground were adversely affected, providing a good test case for the new machine.

These affected areas required rehabilitation with bolts and mesh to make them safe for production again, according to Bray – a process the iron ore miner is continuing to carry out at Kiruna with the prototype Boltec ABR unit.

“The Boltec ABR was the perfect machine for the challenge; it has proven to allow safer operation and significant productivity increases when compared to LKAB’s conventional bolting fleet,” he added.

Epiroc said that up to double productivity gains were achieved in a trial with the Boltec ABR in LKAB’s Malmberget mine when compared with the miner’s conventional bolting fleet.

Bray concluded: “This solution has made the impossible possible. We can now install bolts where it used to be extremely difficult. Giving some relief to the bottleneck that rock reinforcement had become.”