ABB developed an integrated charging infrastructure, with the latest charger technology and a future-proof automated connection device, while MEDATech created a battery-electric powertrain that includes a charge-reception system that can be integrated into any heavy-duty vehicle.

Offering up to 600 kW of power, the eMine FastCharge solution was launched by ABB in September as part of its ABB Ability eMine portfolio of solutions.

ABB and MEDATech have previously worked together on the conversion of the Western Star 4900 tractor to battery-electric operation, but this is the first time the two have tested the automated charging functionality of the FastCharge solution on ALTDRIVE technology.

“Designed for the harshest environments, this flexible and fully-automated solution can easily be installed anywhere, and can charge any truck, without the need of human intervention,” Mario Schmid, Project Lead Engineer at ABB, said.

Charging occurs with no help from machine operators, according to the companies. Drivers station their vehicles next to the charger and the ABB Ability eMine FastCharge does the rest. When the system senses a vehicle is near, it moves the connection pin into position and inserts it into the receptacle, carrying out charging in a fully-automated fashion.

With ABB’s charging capability matching charging cycles to the production, charging times of less than 15 minutes can be achieved, according to the companies.

On September 10, ABB and MEDATech announced the signing of an MoU to jointly explore solutions to decarbonise mining operations through charging solutions and optimised electric drive systems in BEVs for heavy-duty applications.

ABB says it has signed a Memorandum of Understanding (MoU) with MEDATech to jointly explore solutions to decarbonise mining operations through charging solutions and optimised electric drive systems in battery-electric vehicles (BEVs) for heavy-duty applications.

The two companies will share expertise and collaborate in bringing solutions to market that will reduce the greenhouse gas (GHG) emissions associated with heavy machinery in mining, they say.

Technology provider ABB and MEDATech bring complementary expertise to designing and building electric heavy mobile equipment. The collaboration could involve exploring further development and possible technologies for high power and automated charging and connector systems to facilitate the adoption of BEVs in industries with heavy machinery.

“We are very excited to be working with ABB in this new and dynamic field of electric vehicles and will bring our advanced drive train technology to the forefront alongside ABB’s advanced charging technology,” Rob Rennie, Founder and President of MEDATech, said. “Collaborating to accelerate the adoption to emission-free transport systems enabling cleaner operations is truly at the heart of our company.”

The collaboration with MEDATech, which largely works across the mining, construction and energy sectors, is the latest in a series that ABB is developing with OEMs and technology innovators to accelerate the transition to all-electric mines.

Mehrzad Ashnagaran, ABB’s Global Product Line Manager Electrification & Composite Plant, said: “Within the ABB Ability™ eMine framework, ABB is increasingly working with OEMs and technology innovators to fast-track the development of new emissions-reducing systems through the electrification and automation of the whole mining operation. Strategic collaborations, such as with MEDATech, provide solutions that support responsible mining operations. The aim of our combined solutions is to enhance the efficiency and flexibility of customer businesses, contribute to the reduction of CO₂ and the realisation of a sustainable society.”

Nic Beutler, ABB’s Global Product Manager Power System & Charging Solutions, added: “The mining sector has set clear and ambitious targets to decarbonise operations for a more sustainable future. To meet or even exceed productivity targets while not compromising on safety, new thinking and technological solutions are required. ABB and MEDATech are an ideal match for exploring the steps needed to reach net zero emissions for heavy-duty industrial machinery.”

ABB recently launched ABB Ability eMine, an approach, method and integrated portfolio of electrification and digital systems designed to accelerate the decarbonisation of the mining sector. Included within this was the eMine FastCharge solution (prototype pictured) and eMine Trolley System.

The agreement with MEDATech will complement ABB’s engineering and technology expertise on-board and off-board mining vehicles and allow for much needed and lasting solutions for the industry, it said.

MEDATech provides its ALTDRIVE drivetrain technology to OEMs and end users while consulting and developing optimisation tools to realise the efficient and cost-effective implementation of electric fleets, according to ABB.

Based in Ontario, Canada, it has built extensive know-how and expertise in designing, building and testing of prototype systems and vehicles since 2003. It launched the 100% electric mining haul truck, the Western Star 4900XD (pictured below), which has ultra-fast charging capability, accepting a charge power of 600 kW. 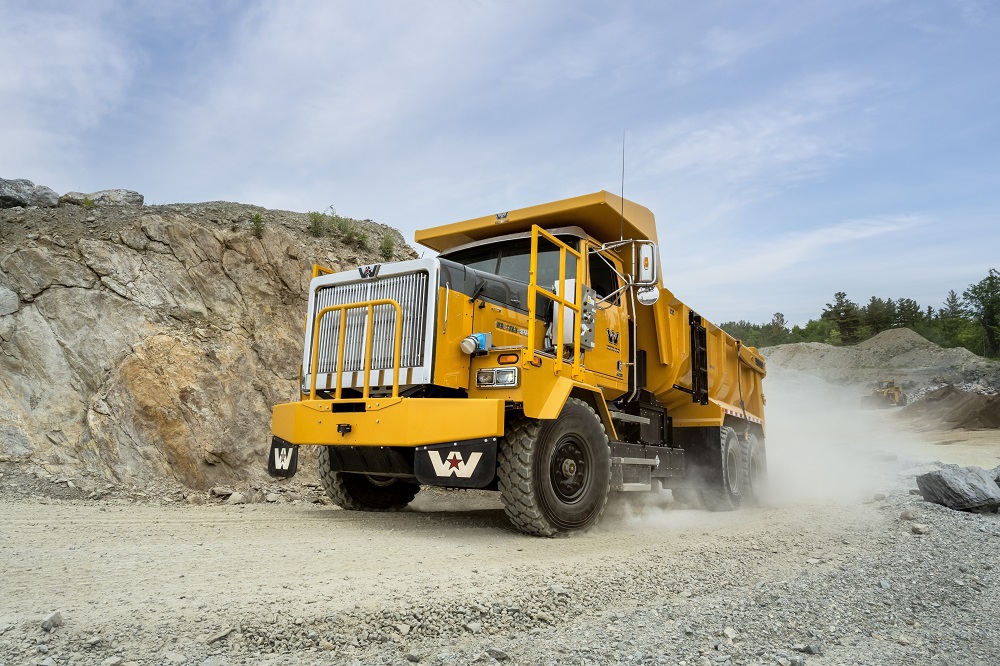 With ABB’s charging capability matching charging cycles to the production, charging times of less than 15 minutes can be achieved, according to the company.

The potential for electric drivetrain specialist MEDATech Engineering Services to add another high-profile client to its list of mining company references is high given the developments the Collingwood-based company is currently working on.

Having helped Goldcorp (now Newmont) and several OEMs realise their vision of an all-electric mine at Borden, in Ontario, MEDATech is energising more electrification projects with its ALTDRIVE system.

The company has been developing electrification technology for heavy-duty, off-highway vehicles for about six years. Its current drive train technology, MEDATech says, is capable of being scaled for most heavy haul applications in mining and other industries.

Aside from the Muckahi project, the ALTDRIVE system, having been engineered to replace internal combustion engines, has been the driving force behind this work, according to Jeff Taylor, Managing Director of MEDATech Engineering.

The powertrain consist of a hybrid, or completely electric means of propelling the machine with industrial batteries, and can be adapted to heavy equipment such as commercial trucks, tractors, excavators, buses, haul trucks, light rail and – most important in this context – mining vehicles.

ALTDRIVE leverages battery systems from Akasol and XALT, chargers and power electronics from Bel Power Solutions and Dana TM4’s electric motors. The balance of the power electronics, control systems and sub systems, thermo management systems, VMU (a software component critical to the power management of the battery, electric motor charging and regenerative capabilities), and integration engineering is developed by MEDATech.

Taylor says it is the battery chemistry and charging philosophy of the ALTDRIVE technology that differentiates it from others on the market.

“The battery chemistry is really quite advanced and is all based on the future of fast charging,” he told IM. “In this scenario, we don’t want the batteries to be brought down to a high depth of discharge (DOD). We instead want operators to carry out quick, opportunity charging on the go.”

Most of the machines the company has been involved in manufacturing to date have been equipped with 25-100 kW on-board chargers, yet Taylor thinks its new breed of fast-charge battery-electric solutions could eventually require up to 1 MW of power and be charged through an automated system.

Such powerful charging systems may be the future of MEDATech’s ALTDRIVE drivetrain technology, but for now it is focused on leveraging the system for the conversion of a diesel-powered Western Star 4900 XD truck (pictured).

Part of a collaborative project with a Western Star dealer in Quebec where the dealer (Tardif) has donated the truck and MEDATech has provided its materials and engineering expertise, the truck is equipped with a 100 kW capacity on-board charger, 310 kWh of battery capacity, loaded gross vehicle weight of 40,824 kg and 25% more horsepower than its diesel-powered equivalent.

Loaded, the truck can cover 85 km (0% grade) on a single charge (80% DOD). This vehicle is ideal as a pit master unit for short run material moving, road maintenance, water hauling/spraying and snow plowing activities, according to the company. The truck can be on-board charged (2.5 hours) and fast charged (1 hour) during idle periods (at 80% DOD).

The machine will be ready for demonstrations at a gravel pit around 15 km away from the company’s Collingwood headquarters in September, and it has already caught the attention of some major miners.

According to Taylor, Anglo American (Chile), Teck Resources (British Columbia) and Vale (Ontario) are scheduled to see the BEV 4900 XD unit in September at the Collingwood facility. “Each company is looking at an electric machine(s) for their operations,” he said. “They might end up with a different truck, built to their exact specifications, but they want to test this machine out to experience a battery-electric conversion.”

After the 24 t payload truck, the company has eyes on converting a 40 t payload Western Star 6900 XD diesel truck to battery-electric mode.

“This will just be a bigger conversion on a bigger truck,” Taylor explained. “We’ll have extra room on the truck for placing batteries and the extra motor that will be required. It will also be an all-wheel drive vehicle, as opposed to the real-wheel drive of the 4900 XD, which will need some extra engineering.”

While Taylor said work on converting this 40 t machine would not start until the all-electric 4900 XD had been tested, he saw plenty of opportunities for scaling up and down the ALTDRIVE technology to create more customised ‘green’ vehicles for the mining industry.

“If you look at any mine site in Canada, there are five or 10 vehicles you could replace with electric versions,” he said.