A preliminary economic assessment (PEA) on the potential expansion of Golden Star Resources’ Wassa gold mine in Ghana has flagged the potential for applying alternative underground haulage methods, and autonomous and battery-electric equipment at the operation.

The PEA provides an assessment of the development of the Southern Extension of Wassa and the increase in mining rates to fully use available process plant capacity. While the study itself represents a conservative plan that excludes exploration opportunities from the scope and adopts the current mining practices and equipment, the “opportunities” section of the technical report outlines some more innovative approaches to expanding mining rates and filling the plant capacity.

The PEA is focused on the development of the large inferred mineral resource (just over 7 Moz) which comprises the Southern Extension zone. Around 50% of the total resource was included in the PEA inventory, which showed off a life of mine of 11 years, with total gold production of 3.5 Moz. Average annual gold production of 294,000 oz represented an approximate 75% increase on the current production rate.

The mine plan considers a production rate targeting the processing capacity, at or close to 2.7 Mt/y run-of-mine material, after a five-year ramp-up period. The plant has previously operated at these rates with feed from both Wassa and the Bogoso-Prestea operation (since sold).

Mining would be by underground trackless decline access (1:7 gradient), with access from duplicate access ramps and independent ventilation infrastructure on each side of the deposit to support the increased mining rate and provide efficient access across the mineralised footprint (circa-850 m along circa-300 m across strike). Truck haulage will utilise the dual access ramps.

The mining method proposed for the expansion is bottom-up long hole open stoping with 25 m level spacing and nominal stope sizes of 25 m length x 30 m width x 25-100 m height with cemented paste backfill. Stopes will be mined in a primary-secondary sequence down to around 1,000 m depth, transitioning to pillarless retreat below that point to account for increasing in-situ stress, which will need to be further investigated in future work.

The PEA assumes average recovery of 94.8%, which is supported by current plant performance and metallurgical test work on a small number of samples that suggest processing performance for the Southern Extension feed will be similar to material currently treated. This will be evaluated in the next phase of work.

Capital expenditure is expected to total around $790 million over the life of the PEA mine plan. Of this total, 29% is growth capital and 71% is sustaining capital. The PEA mining method relies on paste fill, with Golden Star confirming the paste fill plant was constructed in 2020 and commissioning is expected to be finalised this quarter. Capital has been allowed for an expansion of the paste fill system in the PEA mine plan.

Based on a $1,300/oz gold price, the expansion project is expected to generate a post-tax net present value (5% discount) of $452.2 million.

So far, so conventional…

The company said it planned to complete option and trade-off studies to optimise the project plan ahead of a feasibility study on the expansion, due in early 2023.

Just some of the innovations being considered in these trade-off studies include the use of automation, electrification and alternative haulage.

In terms of increasing machine productivity through technology, the study listed off the potential use of semi- or fully-autonomous vehicles to increase shift operating time and remove operators from hazardous areas. It said the highest likelihood applications were in production drilling and drawpoint loading.

Golden Star confirmed current projects included in its in-development technology roadmap were the introduction of tele-remote loading and digitalisation of production data.

In terms of haulage infrastructure opportunities, Golden Star said it was considering the replacement of truck haulage with an infrastructure system like shaft hoisting, conveyor, or Rail-Veyor. The capital demand for such options would be offset by a large reduction in operating costs with automated systems, reduced diesel consumption and reduced ventilation demand, it noted.

These haulage options were being studied to design different systems, estimate capital and operating costs, then complete a trade-off analysis, the company said.

And, of course, the company said it was considering options for clean energy technology applications, particularly battery-electric trucks. As part of this, it was assessing available systems and developing fleet selection criteria. This will have knock-on benefits to the mine’s ventilation requirements.

Increased uptake of autonomous loading and hauling technology at the LaRonde (pictured) and Kittila gold mines has helped Agnico Eagle Mines post a record quarter of production for the last three months of 2020.

Homing in on LaRonde Complex (including the LaRonde mine and the LZ5 Mine), in Quebec, Canada, Agnico put the good performance at LaRonde – production of 105,729 oz during the quarter, down from 112,704 oz in the prior-year period when gold grades were 7.3% higher – down partially to the automation strategy that, the company said, had helped improve productivity and allow continuation of mucking activities during non-entry protocols related to seismicity.

At LZ5, in 2020, 14% of tonnes mucked and hauled to surface were accomplished in automated mode with operators based on surface. This surpassed the 15% target the company had set. For 2021, it is expected 17% of the tonnage will be mucked and hauled remotely to surface and the production rate is expected to be sustained at around 3,000 t/d. “The LZ5 automation team will continue optimising the automated mining techniques,” Agnico said.

Agnico said the target for 2021 is to muck over 17% of the total tonnage for the LaRonde Complex from surface. The company said it is also carrying out work to perform production drilling using automation.

In a January presentation, Agnico stated that 10 LHDs and four trucks had been equipped with Sandvik’s AutoMine® system. Back in 2018, Sandvik announced that the LaRonde mine would become the first operation to use AutoMine with LTE communication network underground on a production scale.

To continue tailings deposition through the LaRonde Complex life of mine, Agnico is also constructing dry-stack tailings facilities, which are expected to be operational by the end of 2022. Dry stacking will help limit the footprint of the new tailings facility and improve the closure of the main tailings ponds, Agnico said.

Moving to Finland at the Kittila gold mine, the use of automation also paid off.

The company said Kittila continued delivering strong performance in the December quarter of 2020, with production above forecast by around 6,000 t. This also coincided with the commissioning of the expanded mill at Kittila, which is now ramping up towards the design capacity of 2 Mt/y.

The mine delivered a record full-year ore production of around 1.85 Mt in 2020, according to the company.

“This performance (in Q4) is driven by an improved fleet management and an increased usage of automation,” Agnico said.

Kittila has been testing autonomous hauling trucks and tele-remote equipment and is targeting to achieve 50% of production drilling and 15% of hauling remotely in 2021, it said.

On top of this, Agnico said the mill had consistently increased availability and the company was evaluating the implementation of advanced process control in 2021.

One of the three underground projects to make up the El Teniente New Mine Level development, in Chile, is set to use state-of-the-art autonomous technologies, Codelco’s Javier Cornejo told attendees at Massmin 2020 today.

In a presentation titled, ‘Design of drawpoint spacing at Diamante Project – El Teniente Mine’, Cornejo confirmed that the company planned to use 13 yd³ (9.9 m³) LHDs and 60 t haul trucks in autonomous mode at the copper project, with only assisted loading required on the LHDs.

The project, which will use conventional panel caving with hydraulic fracturing, is due to have a production capacity of 35,000 t/d, with each autonomous loader extracting 152 t/h to ore passes and each haul truck transporting 208 t/h to 420 t/h ore bins. From here, the ore will head to the processing plant via 830 t/h autonomous rail haulage.

Diamante’s development will involve 40 km of horizontal development in total, along with 2 km of vertical development. It also contemplates a new access tunnel to El Teniente. In more detail, Diamante will include the main undercut at level 2060, production level (LHD transport from 102 drawpoints to ore passes – in total 1.4 Mm³) at 2038, ventilation level at 2020, truck haulage level at 2000 (trucks to ore bins), feeding the main existing mine rail haulage FFCC T8 system at 1980 level via two crosscuts. 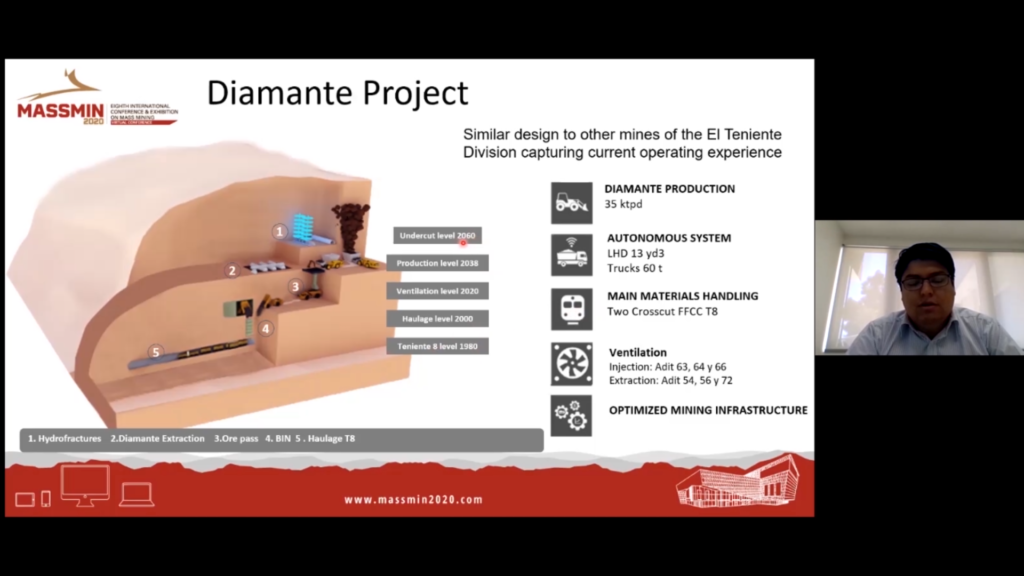 It is one of three underground projects that make up the El Teniente New Mine Level project. Diamante and the other two – Andesita and Andes Norte – will help access the deepest levels of the mine and extend operations by 50 years, according to Codelco.

In the company’s most recent September quarter report, Codelco said the El Teniente New Mine Level project was 62.6% advanced. Due to COVID-19, the project was halted on July 4, with work restarting on Andesita and Diamante in August.

Codelco’s Board of Directors recently approved $730 million and $513 million investments in Diamante and Andesita, respectively.