ArcelorMittal Mining Canada is investing in a project using a new flotation system at its Port-Cartier pellet plant in Quebec, Canada, that will allow it to convert its 10 Mt/y pellet production to direct reduced iron (DRI) pellets by the end of 2025.

The announcement was by ArcelorMittal and the Government of Quebec at COP26 in Glasgow, Scotland, this week.

The C$205 million ($165 million) investment, in which the Quebec government will contribute through an electricity rebate of up to C$80 million, will enable the Port-Cartier plant to become one of the world’s largest producers of DRI pellets, the raw material feedstock for ironmaking in a DRI furnace, ArcelorMittal said.

The implementation of the flotation system (see graphic below) will enable a significant reduction of silica in the iron ore pellets, facilitating the production of a very high-quality pellet, according to the company. It will also include new tailings and concentrator thickeners and new additives for the grinding process. 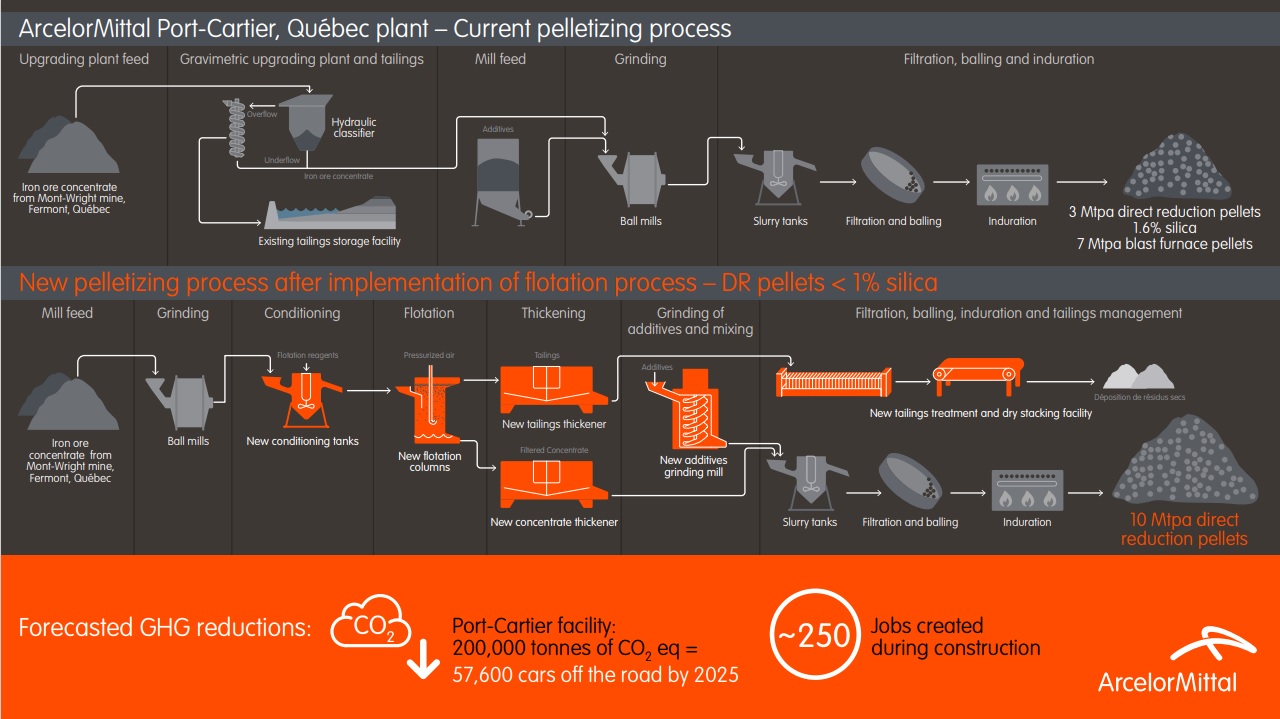 In Hamburg, Germany, ArcelorMittal is trialling replacing natural gas with hydrogen to make DRI, with its industrial-scale pilot project anticipated to be commissioned before the end of 2025.

The DRI installations the company has announced it is developing in Belgium, Canada and Spain are all being constructed to be hydrogen-ready, so as and when green hydrogen is available in sufficient quantities at affordable prices the company can produce DRI with near zero-carbon emissions.

Approximately 250 jobs are expected to be created during the construction phase of the project in Port-Cartier, which is scheduled to be begin mid-2023 and complete before the end of 2025.

Quebec Premier, François Legault, said: “We are positioning our regions at the heart of the green economy of tomorrow. My message to companies looking for a place to reduce their greenhouse gas emissions is come and see us. We’ll help you carry out your projects promptly. Quebec is the best place in the world to invest in the green economy. To build together a greener, more prosperous and prouder Quebec.’’

Aditya Mittal, ArcelorMittal CEO, said: “This project has an important role to play in our efforts to reduce our group’s CO2e emissions intensity by 25% by 2030, and our longer-term ambition to reach net zero by 2050. Not only does it deliver a significant reduction in our emissions at AMMC, but it also expands our ability to produce high-quality DRI pellets, which we will need in significant volumes as we transition to DRI-EAF steelmaking at our steel plants in Canada and Europe.

“I am grateful to Premier Legault and his government for the support it is providing in realising this project. It is the first significant decarbonisation project we have announced for our mining business and fitting that we are able to make this announcement at COP26 as it exemplifies the transformational change we need to deliver this decade as we move towards becoming a carbon-neutral business.”

Mapi Mobwano, CEO, ArcelorMittal Mining Canada, added: “This investment will see us become one of the biggest direct reduction pellet producers in the world, thereby propelling ArcelorMittal Mining Canada into the forefront of mining and steel decarbonisation. From 2025 onwards we will have the capacity to produce 10 Mt of very high-quality iron oxide pellets, with low silica content and high iron density, which will be highly strategic in the years ahead.”

Each year, about 1,000 so-called “exceptional” trucks are needed to transport the mining machines assembled by Liebherr-Mining Equipment Colmar SAS to the Belgian seaports to join mine sites around the world in the likes of Australia, Africa and Asia.

In June 2019, the company challenged itself to shift the pre-haulage to the seaports from road to river and, after 18 months of experimentation, the ecological and economical results have proven very positive, with the company deciding to pursue its efforts.

Before starting this project, Liebherr-Mining conducted an in-depth study on the modal shift, 50% financed by Voies Navigables de France (VNF – Inland waterway association) Strasbourg and with the help of an international consulting company. This funding is part of PARM (assistance plan for modal shifts) piloted by VNF and intended to support companies wishing to move to river transport.

Established in Colmar for almost 60 years, the company decided to contribute to the development and competitiveness of the region by working with local firms. Thus, the pre-haulage from the factory to the Rhine port was entrusted to the two Alsatian carriers Straumann (Colmar) and Wack (Obernai and Drulingen). The barging company is Haeger & Schmidt Logistics.

One of the first positive aspects of river transport is the reduction of environmental footprint. For the same amount of goods transported, a barge will consume three to four times less energy than a truck and emit up to five times less CO2, the company claims

By reducing road traffic, noise pollution is also reduced because river transport is a quieter mode of transport.

River transportation comes with numerous other advantages. With an almost zero accident rate, the river is a safe mode of transport – the absence of traffic saturation and the presence of loading software guarantee the perfect stability of the boats, Liebherr says.

In terms of deadlines, a machine ready for dispatch on Friday morning can be at the seaport (Antwerp or Zeebrugge) on Monday morning. For many types of goods, if the flow is industrialised and if the company commits to a forecast volume, river transport is also a less expensive solution. Liebherr in Colmar was able to save money thanks to river transport.

This pre-haulage strategy initiated by the mining division has opened up a new path in the Liebherr Group. Other factories in the group are now studying the possibility of following the same path, the company says.

In Wallonia, southern Belgium, the BEUMER Group Pipe Conveyor has been transporting fly ash quietly and dust-free as part of a project that will eventually see the residue from a former operating coal-fired power plant emptied to create a nature park.

The coal-fired power plant was in operation in the Belgian town of Flémalle, with the coal residues since landfilled on a fly ash stockpile.

With the stockpile to be entirely emptied and the terrain transformed into a nature park, a BEUMER Group Pipe Conveyor is being used to transport the fly ash to the Maas River for shipment.

BEUMER Group said: “The system has not only been adapted to operate along the steep mountains, but its enclosed design prevents the volatile material from coming into contact with the environment, while enabling a low-noise transport to the destination. This is important as the Pipe Conveyor passes over public motorways, railways and residential areas.”

This project has seen close cooperation between the BEUMER Group team and the customer, Tractebel Engineering (Group ENGIE), with the transport of the fly ash carried out in strict compliance with safety standards, taking into consideration environmental protection and the effect noise pollution has on local residents.

In Flémalle, less than 20 km away from Liège, there are about 2 million cu.m of residues of slates and stones or bottom ash in a fly ash stockpile within proximity of the coal-fired power plant. The stockpile is surrounded by a wall but, according to a study, it will over the long term represent a major threat for the local residents as it is displaced every year by several millimetres. In addition, the fly ash is an important additive in the manufacture of cement and concrete, with the material prepared to remove foreign substances such as wood or metal and the grain size reduced.

In a project that is the only one of its kind in Europe, the Belgian power supplier Elektrabel commissioned its subsidiary ENGIE to plan and install a processing plant. This could see the complete stockpile dissipated in the next 10 years, before the area is transformed into a nature park.

Until then, the bulk material must be transported to the Maas River, around 2 km away.

The terrain leading to the river is very mountainous and the use of trucks would imply driving on public roads for long distances. This would have caused detours, slowed down transport times and raised costs, according to BEUMER Group. In addition, there would be the environmental effects of exhaust gases, dust and noise. The project lead opted for the BEUMER Group Pipe Conveyor as an economical alternative, the company said.

“It includes also our Pipe Conveyor. This international team of BEUMER Group bundles the know-how and supports the Sales Department and the Project Management. With Tractebel ENGIE, we have developed a solution adapted to the special routing and the ambient conditions.”

The system supplier provided a conveying system with a centre distance of 1,800 m. “Due to the system design and the required system capacity, we have designed the Pipe Conveyor with a diameter of 260 mm,” Ferlay said.

The conveyor transports 300 t/h of fly ash at a speed of 2.3 m/s with, most importantly, enclosed transport to protect the environment from the dry and dusty material. This was an important requirement for the construction of this solution to be approved in the first place, according to Ferlay. “The project planning absolutely had to guarantee a safe transportation of the material,” he said. “The fly ash had to be prevented from exiting or falling on the ground, even in the smallest quantities.”

Noise emissions played an important role too: “We had to minimise the noise to an extremely low level,” Ferlay said.

The BEUMER Group team developed special sound-absorbing elements that were also used to enclose the Pipe Conveyor bridges. “Along certain line sections, the noise level had to be kept under 35 dB(A),” says Ferlay. This is also possible with special sound insulation, idlers and low-noise bearings.

The Pipe Conveyor transports fly ash across the open environment, navigates large inclines reliably and can be designed to accommodate tight curve radii, according to the company. Therefore only a few transfer towers are required, depending on the length of the conveyor, the terrain conditions and the curves.

The company said: “BEUMER Group can customise the conveying system to match the individual routing, thus protecting the environment and reducing the costs. The system supports are up to 10 m high. Durable conveyor belts guaranteeing tensile strength are used.”

The company also makes use of its dimensioning programs to determine the ideal belt design, enabling the analysis of tractive forces, as well as forces that occur due to acceleration and deceleration – always the company to consider the net weight of the belt and the transported material. This method also allows calculation of possible curve radii. “This is particularly important for ascending and descending conveyors,” Ferlay said.

The system supplier provided the turnkey system and all necessary components such as filters, strippers and dedusting units. It also provided the engineering, automation and steel structure, as well as loading systems: excavators load the material into hoppers and on vibrating feeders. From there, it is transported to the feeding area of the Pipe Conveyor.

BEUMER Group installed a ship loader at the end of the conveyor line, which consists of a fixed boom with an extendable telescopic belt conveyor. This way the ships are loaded efficiently.

The ship loader is also equipped with a dedusting unit which keeps the process emission-free. Every day, 2,000 t of fly ash are loaded on a ship and from there transported to a cement plant.