Fenner Dunlop says it is revolutionising safety within the mining industry with its intelligent conveying products and services.

Performing manual inspections is a major challenge that mine sites face on a daily basis, and they can have serious implications to the safety of personnel on site.

This is one of the reasons the company is finding customers are particularly interested in its mobile inspections and thickness testing solutions through iBelt’s BeltGauge and DigitalHub technology, according to Steve Fidoe, Senior Diagnostics Service Coordinator.

“Some of our customers in the Pilbara have over 100 conveyor systems on site, which would traditionally mean a larger workforce required to complete the belt thickness reports,” he said.

“By investing in BeltGauge, our customers are able to reduce the number of people required on site – less people means less risk and less time spent on site.”

BeltGauge is available in a fixed or mobile unit. The fixed unit provides 24/7 autonomous monitoring, removing the need for any technicians on site performing hazardous tasks. While the mobile unit doesn’t eliminate technicians from site, it does reduce risk of damage to equipment, the conveyor system and, most importantly, the person performing the scan, Fenner Dunlop said.

The mobile BeltGauge is designed to be easily transported, installed and moved to the next conveyor. It was designed from the ground up, taking into consideration the learnings of Fenner Dunlop’s first-generation BeltGauge unit, known as OTT, and the experience of its technicians.

While the core hardware has not changed much, the new BeltGauge units are more ergonomic and flexible in design, according to the company.

“The previous OTT units were long and weighed approximately 30 kg,” Fidoe said. “This came with vehicle load restraints and potential manual handling hazards, not to mention days lost just getting the equipment to site.

“As you can imagine, equipment that is 3 m long is difficult to manoeuvre; clipping together the mobile BeltGauge is a much more streamlined approach.”

The mobile BeltGauge unit is made from a range of plastic composites that clip together, meaning no hazardous tooling is required, such as spanners, hammers, or power tools. The reduction in weight and size also means that freight and manual handling are no longer a safety issue. When compared with the OTT, the mobile BeltGauge design has reduced the weight by over 50%, according to the company.

Fidoe explained: “Mobile BeltGauge allows us to be reactive for our customers. It can be transported as airport carry-on with technicians on site and ready to perform work within one day. Once on site, the job can be completed in as little as two hours.” 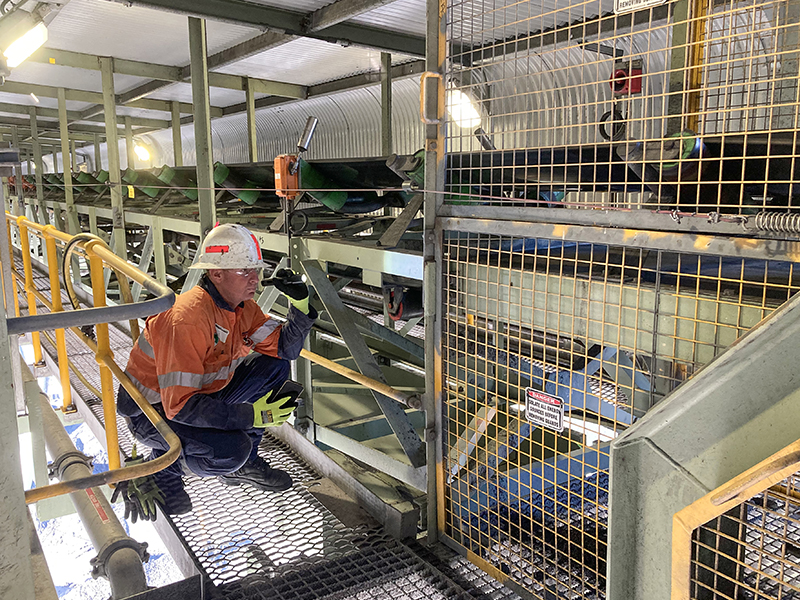 Recent developments allow mobile BeltGauge to be suitable for all applications, according to Fidoe.

“In the past it has been nearly impossible to obtain thickness readings safely for certain applications, such as elevated systems with narrow gangways or short-cycle stacker systems where angles are constantly changing and there is limited space for installs,” Fidoe said.

Mobile BeltGauge, meanwhile, can be assembled at the conveyor system with technicians able to obtain readings from challenging positions.

“Our team can position the unit safely under belts without the risk of equipment overhanging walkways,” Fidoe said.

“We were able to prove to customers that mobile BeltGauge removes technicians from hazards and allows thickness testing to be completed on a live system safely.”

“The fixed unit is a tool that allows sites to effectively utilise their condition monitoring teams – it doesn’t replace condition monitoring on site, but instead acts as an additional asset making teams more accurate, more efficient and able to take decisive action in the lead up to shutdowns,” Fidoe said.

“On one site alone, BeltGauge identified at least eight conveyors that were suffering significant wear, which the site was consequently able to address prior to it becoming a major issue.”

Another element of iBelt’s intelligent conveying technology is DigitalHub, which assists technicians to conduct digital inspections via a mobile app. Digital inspections have been rolled out at a number of sites across Australia, allowing sites to improve planning efficiency, Fenner Dunlop said.

“Mobile inspections through our DigitalHub app are more comprehensive than similar products in our industry,” Fidoe said. “Technicians are guided to capture critical data, events and photos, with issue alerts triggered before an inspection is even finished.

“Customers can be looking at the data in the DigitalHub portal while the technician is performing the next scan or inspection.”

Fenner Dunlop Chief Operating Officer, Steve Abbott, concluded: “Our outlook is that these things go hand in hand – when you make something safer, you allow sites to become more efficient. The customer has remained at the forefront of iBelt technology developments.

“Ultimately, the iBelt range of intelligent conveying products and services provide customers with a maintenance strategy that can be customised to suit unique customer needs.”

Fenner Dunlop has introduced mobile capability to its suite of iBelt conveyor technology with the BeltGauge solution offering a new way for customers from all commodities and conveyor industry applications to accurately monitor health of the conveyor, the company says.

The fixed BeltGauge solution has been installed at multiple sites since its launch in September 2020, with the industry appreciating how lightweight the mobile unit is when compared with competitor products, according to Conveyor Technology Manager at Fenner Dunlop, Sam Wiffen.

“We have been experiencing high interest and up-take with the fixed BeltGauge unit, however we recognised that some customers required a more mobile solution,” Wiffen says.

“In order to be functional for the mobile context, we needed the unit to be lightweight, flexible and adjustable – properties which have been incorporated into the design and are a strong point of difference from competitors.”

The mobile BeltGauge unit is made from 3D printing a wide range of engineering composites and plastics-based compounds. This contributes to the safety of conveyor technicians by reducing manual handling risks on site.

“The segmented mobile BeltGauge design allows us to install the scanning units in tighter spaces, without having to overhang the unit above handrails,” Wiffen says.

Both the mobile and fixed BeltGauge have been designed to meet all customer requirements, regardless of geographic or commodity group, and are applicable for surface and underground mining applications, the company says.

“The mobile BeltGauge is designed for customers with critical conveyors, who are comfortable with periodic data and are more focused on the ability to record belt thickness across a range of operational conveyors,” Wiffen explains.

Unlike traditional manual thickness testing, the mobile BeltGauge provides customers with a full-length profile of the belt. Because of the mobile nature of the unit, multiple conveyors can be scanned in a single shift, according to the company.

The iBelt mobile BeltGauge is currently in operation with Fenner technicians in the Hunter Valley of New South Wales and Mackay in Queensland, with field trials currently underway in Western Australia.

Sales and Engineering Manager, Shailendra Borade, explains that developments to the mobile BeltGauge also include the ability to collect belt thickness readings while the conveyor is running, allowing customers to conduct maintenance inspections without stopping production.

“For our customers in Western Australia and other similar sites, who operate 24/7 and have very few shutdowns in the year, this means they can scan the belt before shutdown, review the data, and plan and forecast belt changeouts with latest information and improve belt life and asset health,” Borade says.

“This is huge asset for our customers, reducing overall downtime and improving production efficiency.

“Operating in a niche industry, it’s crucial that we are able to differentiate our products and services, while providing added-value to the customer.”

As Fenner Dunlop expands the range of iBelt products, both mobile and fixed applications will be considered, it says.