An upgrade compatible with all Warman AH®, M and L series slurry pumps, the streamlined parts offer total ownership cost reductions, according to the company.

Warman WRT technology is the culmination of decades of research into the wear patterns and hydraulic performance of the Warman AH pump’s impeller and throatbush, the company explained. Together with a unique vanelet on the back shroud, replacing the five-vane impeller with a modern four-vaned design improves fluid guidance through the pump and represents a step change in impeller design, it said.

This technology has already proven its worth in the field, such as at Blackham Resources’ Matilda gold mine in Western Australia. Here, the installation of Warman WRT technology more than doubled impeller wear life in a demanding application involving abrasive, highly viscous slurry, Weir Minerals said. The new impeller and throatbush reduced total ownership costs for the pump by A$27,000/y ($19,117/y) due to the parts’ higher efficiency and longer wear life.

Marcus Lane, Global Product Manager, Centrifugal Pumps, said: “What I love about our Wear Reduction Technology is how it improves on everything our customers expect from the iconic Warman AH pump range.

“It simply makes the world’s most famous slurry pumps even better.”

Not only do the hydraulic refinements lower the pump’s lifetime consumption, but they reduce the net positive suction head requirements of the pump, making the upgrade an ideal way to compensate for process or feed changes which have left a Warman AH pump overtaxed, the company said.

“I’m so proud of the way Warman constantly innovates for existing customers,” Lane said. “Retrofitting WRT technology into an installed pump couldn’t be easier – next time you need to replace your impeller and throatbush, simply install the Warman WRT parts instead. Nothing changes in your setup, fitment, or general maintenance practices. The pump doesn’t need a speed change and the entire process uses existing maintenance tools.

“Really, the only thing that changes is that your pump is now a lot better at its job.”

With the industry currently undergoing an evolution in power inputs – the focus having shifted towards renewable and clean options that can offer both a reduced carbon footprint and energy diversity – the HSK78G can be used alongside the likes of diesel, solar and wind energy to ensure mining companies have a reliable power solution in place.

Cummins debuted the 1.6-2 MW generator series at the 2019 Middle East Electricity show back in March and Wilkins told IM at the AIMEX 2019 show in Sydney, Australia, last week (Cummins stand pictured above) that the reception from the mining sector has been positive.

The HSK78G (pictured, left) has been running at Blackham Resources’ Matilda-Wiluna go 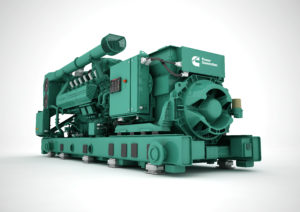 ld mine, in Western Australia, for a few years, in addition to units being deployed at mine sites in China. The company also has plans to test the generator’s efficiency at altitude with a mining customer trial lined up next year in Latin America.

Cummins says the HSK78G is a prime power solution for heavy industry installations in the most extreme environments. Its engineering is designed to push the boundaries of performance and challenge the perceived limitations of natural gas generators for mining operations, according to the company, with the generator designed to operate at the highest altitudes in the most remote locations, all far from the closest grid. This sees the unit offer full power capability without derating at 50°C (122°F) and 500 m (1,640 ft) above sea level (asl), and up to 4,000 m asl with some derating.

It also offers “barrier-breaking fuel flexibility” and the ability to burn pipeline natural gas, flare gas down to 40 methane number (MN), biogas and ultra-low fuels down to 273 BTU/scf without derating. At the same time, it can handle contaminant levels on very aggressive fuels, Cummins says.

This sees the generator deliver high electrical efficiency of up to 44.2% (50 Hz) and 43.5% (60 Hz) on a range of pipeline natural gas down to 70 MN, with as low as 250 mg/NM³ nitrous oxide emitted without aftertreatment – bringing it in compliance with the relevant EU and US standards.

The most obvious markets for the generator are those regions with plentiful natural gas supplies – Australia being one – according to Wilkins. Yet, as all operators are looking to cut their fuel and electricity consumption and diversify their energy mix, the 78 L generator set could end up reaching a far wider audience.

Battery backup is being discussed across the mine power sector currently, with installations such as the wind power solution at Glencore’s Raglan nickel mine in Nunavik, Canada, held up as an example of how effective renewable energy can be even when the wind is not blowing.

Despite this, not all renewable power solutions using batteries offer an economic business case for mines. In some applications, a battery’s weight and size can also inhibit operations.

This leaves a void for other energy inputs to fill. Wilkins is confident natural gas and the generators Cummins is now producing can fill that void in many markets looking for a cleaner power supply than the alternative diesel equivalent, and one that can be relied on regardless of weather.

Cummins has invested heavily in the HSK78G, which it is hoping will become a platform it can build a natural gas generator portfolio on.

“It can deal with all different gas types,” Wilkins told IM, explaining that the generator has been fitted with a variety of sensors that assess the energy input and react accordingly. This allows customers to use a variety of natural gas in the generator from different industrial sectors, while benefitting from the same performance.

Different sensors on the machine can constantly monitor the generator’s performance, providing the baseline predictive maintenance solution every mining customer operating in a remote region is currently after.

Realising this 12 cylinder generator is likely to be used as part of a wider power solution – not necessarily being in constant operation – the HSK78G is also fitted with a load variation system that is able to manage fluctuations in power supply.

As the ‘platform’ comment would indicate, the HSK78G is not the start and end of Cummins’ venture into the gas generator field.

Wilkins said the company is already working on the launch of a 500 kW gas generator that could be used in remote communities (such as those around mine sites). This is expected to be launched later this year.

He also said Cummins’ engineers envisaged both 16-cylinder and 20-cylinder generators being added to the range.

The company is not setting its sights solely on natural gas as far as mining energy diversity goes.

Wilkins said. “We have got to be across a number of different solutions.”

To this end, Cummins has made investments in natural gas, diesel and batteries. It is also awaiting approval for its acquisition of fuel cell manufacturer Hydrogenics.

This corporate activity is a clear indicator of the changing power characteristics of not only the mine power segment, but the wider industrial energy sector.

“Customers are demanding more of a ‘solution’ than a product now,” Wilkins said. “There are a lot of companies out there that can provide the individual components, but we want to provide these solutions.”

Blackham Resources has enlisted the help of Cummins and its new HSK78G gas generator to power up production at the Matilda-Wiluna gold operations in Western Australia, according to the engine manufacturer.

Blackham’s power supplier, Perth-based Contract Power Group, selected the newly launched Cummins HSK78G generator to supply prime power for the next stage of expansion at the mine. The new gas-powered generator will provide up to 20% of the mine’s power as the company strives to increase its production.

Located 500 m above sea level, Matilda-Wiluna is subject to extreme temperatures, ranging from -2° C to 50° C throughout the year. Considering these conditions, the HSK78G’s capability to deliver power in remote areas and extreme climates – generating up to 1,800 kWe in ambient temperatures of 55°C – was a crucial requirement behind the choice to select the generator, Cummins said.

With a power density of 2 MW from the new Cummins 78-litre, V12 gas engine, the HSK78G provides high electrical efficiency up to 44.2% on a wide range of pipeline natural gas down to 70 methane number (MN) without impacting power and efficiency output, according to the company.

Craig Wilkins, Director of Cummins Prime Power Segment and Global Sales Support, said: “It’s an exciting time in the power solutions sector and we’re delighted to deliver the latest innovations in gas generator technology to Blackham Resources. The company operates on a massive scale and required a sizeable dependable power generation solution to operate in difficult conditions. Cummins’ HSK78G offered the required performance levels as well as one of the industry’s longest major overhaul service cycles of 80,000 hours.”

Marc Grosser, General Manager of Contract Power Group, said: “We are happy with the performance of the unit so far and the associability of maintenance items. It’s a compact unit and very well designed. Cummins have ensured there is fast service and support when called upon, despite our extremely remote location.”

Blackham expects to produce 70,000-80,000 oz of gold in its 2020 financial year and aims to progress its Sulphide Expansion project to unlock the large sulphide reserves and resources it has delineated at Wiluna.